“Bad Luck” opens with the playful but sloppy video of relations between schoolteacher Emi (Katia Pascariu) and her irresponsible husband Eugen (Stefan Steel), shown in the center of the screen, bordered in pink. Somehow, the video is uploaded to the internet, taken down, uploaded again, and the parents of her students demand her dismissing, which she refuses. Emi’s annoyance, then anger, and her refusal to bow takes up the first part of Jude’s film, followed by a dictionary of obscenity, in which Jude courses in an essay in definition form through the history of hypocrisy and oppression in Romania and Europe. This passage is filled with the kind of bitter, biting epigrams that a friend would snap or a stranger would tweet: at moments, it’s breathtakingly harsh, direct, and gravely funny. This passage is like a rapid-fire, rancid daydream, as if the movie or the country itself fell asleep in the middle of the twentieth century and is still tossing and turning with horrors. 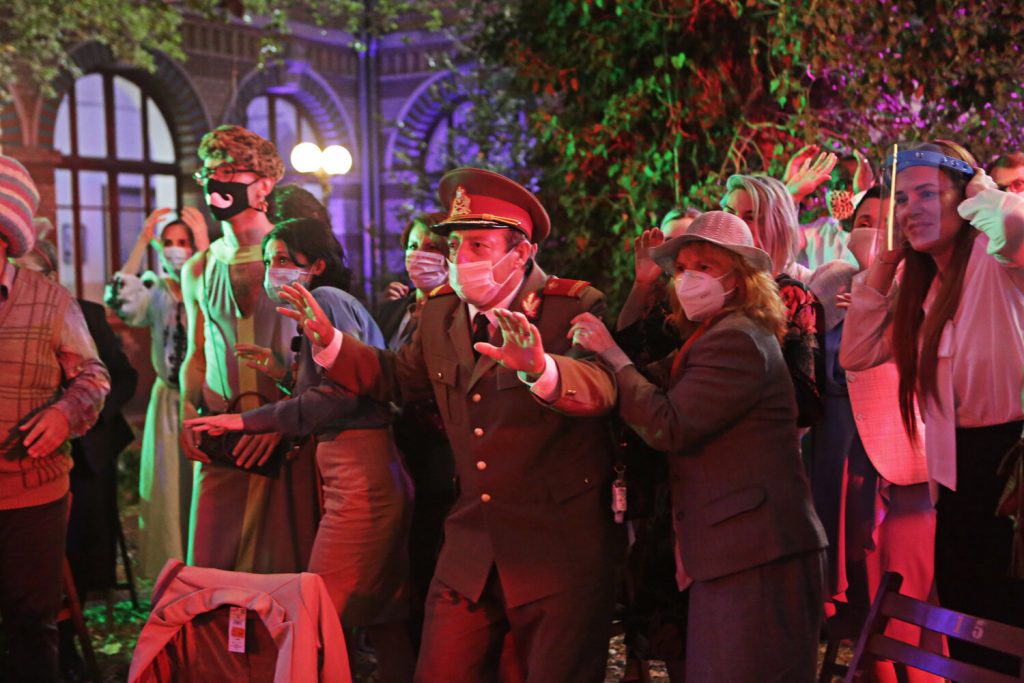 Many Romanian protagonists are already bonkers, but the pandemic has even passersby in “Bad Luck” ready to explode from behind their masks. (Jude shot during Romania’s second wave of COVID-19.) The outrages that pile up are parallel to the esthetic incitement of the films of the “weird” era of filmmaking in Greece. (That country’s northern metropolis of Thessaloniki is only 500 miles from Bucharest.)

The country’s post-dictatorship cinema came to life from exceedingly modest means that were fully exploited by its filmmakers. From about 2005, writer-directors such as Cristian Mungiu (“4 Months, 3 Weeks and 2 Days,” “Beyond The Hills”), Corneliu Porumboiu (“12:08 East of Bucharest,” “Police, Adjective,” “The Treasure”), Andrei Ujica (“The Autobiography of Nicolae Ceausescu”), Cristi Puiu (“Aferim,” “The Death of Mr. Lazarescu,” “Aurora”) and Radu Jude (“I Do Not Care If We Go Down in History as Barbarians”) made movies with exceptionally long takes, with muted drama or simmering modesty or quietly contained sarcasm in a country that had shuttered its movie theaters.

Romania, in a heyday of elegant, restrained dramas had few, if any screens: they had all been run down or closed after the failure of the post-Ceausescu economy and before Western powers had brought their investments to that Balkan land of under 20,000,000 consumers. Filmmakers set up traveling cinemas to bring their world-class work to local audiences at first, like how villagers get movies from the outside world in Ghana. But in the outside world, the Romanian new wave found favor (and finance).

There was a commonplace about American low-budget movies in the 1990s, of Sundance-branded movies not limited to “Clerks”: The cheapest production value is dialogue. The Romanians knew that, but also about inexpensive virtues of the persistence of observation: there’s an old man neglected by the healthcare system (“The Death of Mr. Lazarescu”)? Keep your eye on him for two-and-a-half hours. Watch the EMTs, the hospital workers, even the angels prepared to swoop him away once the world fails him.

Jude’s impulse to make “Bad Luck” came from conversation, which its discursive style betrays. “The film first appeared out of long discussions with friends. On a few occasions we discussed real-life stories from Romania and other countries, of teachers being expelled from schools where they were teaching because of what they were doing in their private lives: live-cam sex chat or posting amateur porn recordings on the internet,” he says in the film’s press notes. “The discussions were so heated, it made me think that although the topic seems trivial and shallow, there must be a lot more behind it if reactions to it are so powerful. Then I decided to make a film—so now I have the last word in front of my friends, they cannot come up with something like that! The film has three parts which engage each other in poetic ways—understanding ‘poetic’ according to Malraux’s definition: ‘Without doubt all true poetry is irrational in that it substitutes, for the ‘established’ relation of things, a new system of relations.'”

The relations that Jude describes take on a few Brechtian attributes and are relayed in a very direct approach as the camera stands at mute distance and watches his schoolteacher protagonist as she swims upstream against the city. Along with Emi’s confrontation with the parents (whose many vile prejudices are peeled away along with their sexual sanctimony) in a socially distanced, outdoor courtyard setting, the camera settles into a topographical musing about the country, its commerce, its citizenry, via the streets of Bucharest. Emi walks down the choked, busy streets and sidewalks, and the camera follows her, after a fashion. The widescreen image goes drifty-dreamy, moving away from her with the same steady moves in each shot to survey the streets she traverses from one humiliation to another, surveying storefronts as she passes, but also detaching from her point of view to a gander at higher stories, billboards and statuary, to look upon the ghost traces of shuttered buildings, the ironic remnants of weather advertising. The sound of the city continues, a matrix of fumes and fuming: just about everybody is ready for a fight, and several erupt around her. There’s a lot of commonplace architecture that resembles that of other countries in the region, as well as commonplace disrepair and abandonment. Voices bark. Threats rise. Tempers simmer and erupt. It’s a fucking disaster!