Sir Kenneth Branagh pulls out that new-fangled black-and-white photography for his wan memory capsule of decorous falsity, “Belfast,” which takes place in a house on a block against a divider wall during the eruption of partisan violence in August 1969 in Northern Ireland. A boy newcomer (Jude Hill) plays Buddy, a blonde dumpling at the center of many, many of the wide-angle proscenium shots Sir Kenneth prefers, which take in all the characters and suck out most of the drama. Sloppy closeups slosh the characters around at moments of agitation and drone shots offer punctuation, giving us the point of view of… a drone.

There are also slightly low close-ups on the dumpling boy, as if capturing a banty god. Could the veteran writer-director-producer (who claims he was convinced to cut himself from the picture) be coining a maxim and illustrating it fully: “In the personal lies the illegible.” Too much is rudimentary and not enough is rude: Sir Ken is no Ken Loach.

The opening is in color, compiling drone shots of modern Belfast, color-corrected to an extreme and unappealing teal cast, like crummy Instagram pictures. The movie proceeds for the most part in a flat black-and-white that covets the gravity of films as fine as Pawel Pawlikowski’s rhapsodic “Cold War” or Alfonso Cuarón’s ebulliently cinematic “Roma” (both 2018). (Sir Kenneth took his notes on a small card and followed them well.) His eye also favors an old television technique, the “large object in foreground” trick, which provides physical depth, if not meaning. Why are flames burning in front of nameless dad? Dunno! More pointless bother: Ten, twenty, maybe more angles on an exploding car. (It blows up. It blows up again. It blows up real good.) Tufty clouds also score: in black-and-white, the blue of skies can go to gray and black and clouds promise another day like hope itself. There are cute, dancey interludes with never-named, handsome mom and dad, akin to the impassioned lovers of the far superior “Cold War,” an unkind comparison. Another unfair contrast: Sir Ken’s scrapbook never rises to the drenching emotion of Liverpudlian master Terence Davies (who this week took an Irish passport in protest against Brexit).

Amid Sir Kenneth’s low treacle, there are sparks, including a moment of blocking near the very end that in isolation from the general lack of vigor hit me like a two-by-four: Through a doorway, Buddy is talking to the girl. He runs across the street to join his parents, and the girl moves to the left side of the doorway, clearing the composition, but doing something ineffable, the gesture so small. So enormous. Early, there is a brief shot of her ma brushing out her long, straight blonde hair: the composition, like too few, is painterly, as if Belfast were Delft on the River Lagan. 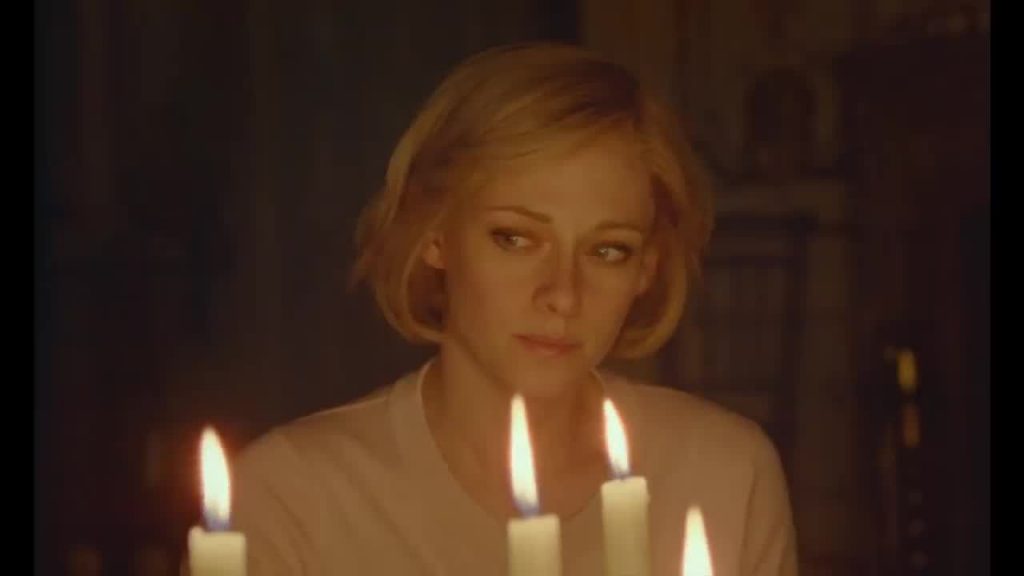 Pablo Larrain’s “Spencer” makes no apologies for its mad movie-movie-ness. With an opening title, “a fable from a true tragedy,” the director of “Ema,” “Jackie,” “Neruda,” “Tony Manero” and “No” illustrates claustrophobia and panic and choking despair to slashing poetic effect, while Steven Knight’s script pronounces themes aloud. (Images, sounds, faces: not words; the “Spencer” gift.) The creative hands include Jonny Greenwood—is there any reason not to see any movie he scores?—and co-producer Maren Ade, whose work of surreal intimacy includes “Toni Erdmann.” In a seventy-two-hour Christmas weekend fever dream at Queen Elizabeth’s Sandringham Estate in Norfolk, Princess Diana suffers the misfortune of great fortune. Kristen Stewart is, of course, center frame and off to one side and splayed in repose. (The gorgeous key art of a white gown fanned across a floor as Diana appears to swoon is revealed in a rude composition as a terrifying joke about the throne.) A key scene: in multiple costumes and in different parts of the castle, Stewart dances with abandon, to Greenwood’s drenching and soaring score, but was shot over the course of days to different pop songs the actress likes. The artistic references of Larrain and his crew, including the brilliant cinematographer Claire Mathon (“Portrait of a Lady on Fire,” “Stranger by the Lake”), are myriad, some pronounced and so many others demanding a lush, fat glossary. (Two movie writers at The Los Angeles Times discuss the hallucinatory portrait’s veracity.)

“True follies are rare, fantastic and filled with inexplicable joy. Bad movies are far more common. The thought of a total bomb detonating onscreen is a ripe prospect, until a doomed movie demonstrates that it is just bad, as minute by minute, hour by hour, you sit through one like ‘Eternals,’ awaiting the sweet release of the mid-credit and post-credit scenes.’Eternals’ could be the MCUinex needed to clear the pipes of the frantic Marvel Cinematic Universe, but who knows? It could well be a colossal smash.” Our longer review is here. 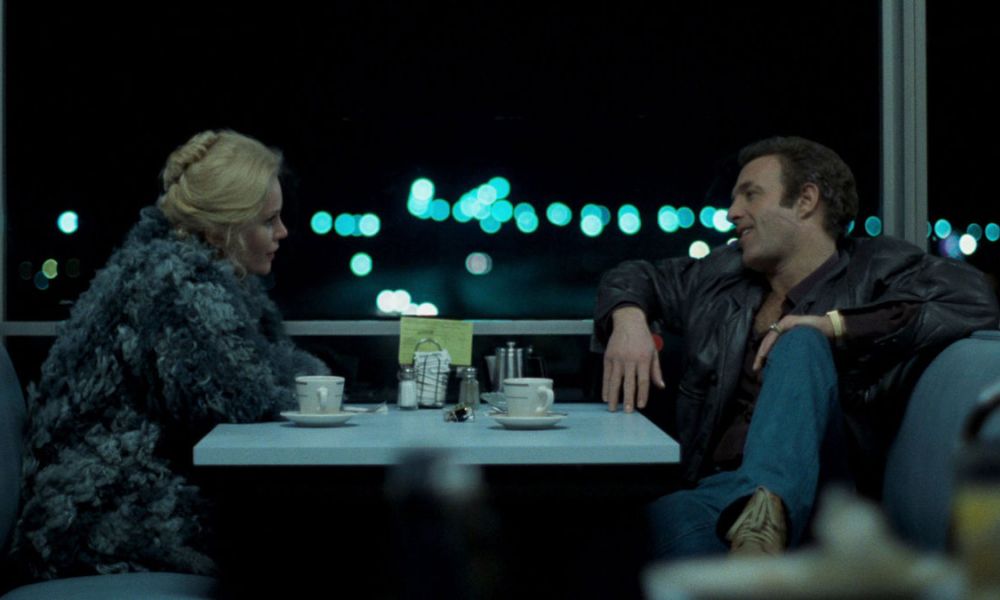 The Chicago Critics Film Festival plays this weekend, November 12-14—the schedule is here—which includes a fortieth-anniversary screening of Michael Mann’s pungent, pugnacious “Thief” in 35mm. Rain-slicked streets reflect neon and spark and fire in “Thief,” Michael Mann’s 1981 neo-noir first feature, a movie that elevates Chicago as a city of dreamy steely blues and sparkling orange and gleaming fluorescence and stately neon. Water trucks followed the long nights of the film’s production, the lights of late, lamented twenty-four-hour delis like the Belden on Clark Street always artfully doubled across blackest pavement. In this gaudy, lonely land of fire, a man looks for redemption, to physically inhabit the dreams he had in a prison stretch that kept him grounded, as he contemplated home and family and a chance to define freedom. Mann persists in his boldly colored nightscapes to the day, including reimagining the interstices of Chicago’s grid system laid atop the pulsing contours of Los Angeles in “Heat” (1995) and “Collateral” (2004), where, ironically, Los Angeles has never looked more like itself. “Thief” shows at the Music Box, Saturday, November 13.

Garrett Bradley’s half-hour “America,” which premiered at Sundance 2019 before the release of her Oscar-nominated “Time,” is streaming via producer Field of Vision, which synopsizes: “Bradley’s cinematic omnibus reimagines a lost history in Black cinema. Inspired by the earliest surviving feature-length film with an all-Black cast, Bert Williams’ ‘Lime Kiln Club Field Day’ the acclaimed director conjures a series of stunning black-and-white vignettes of joy, domesticity and triumph.” It’s a bracing beauty of great vitality.

A boy and his dog? A middle-aged man and his dog and his robot: “Finch,” made under the title “BIOS,” finds Tom Hanks ten years after the end of the world in his usual bed of pain: alone, but not lonely, as possibly the last surviving human, traversing a radiation-spent America in an RV with dog Goodyear and the robot Jeff (the restlessly peculiar Caleb Landry Jones) he has built to protect the dog after he dies. Sensations of doom and mortality are forestalled by routine and daily activity. 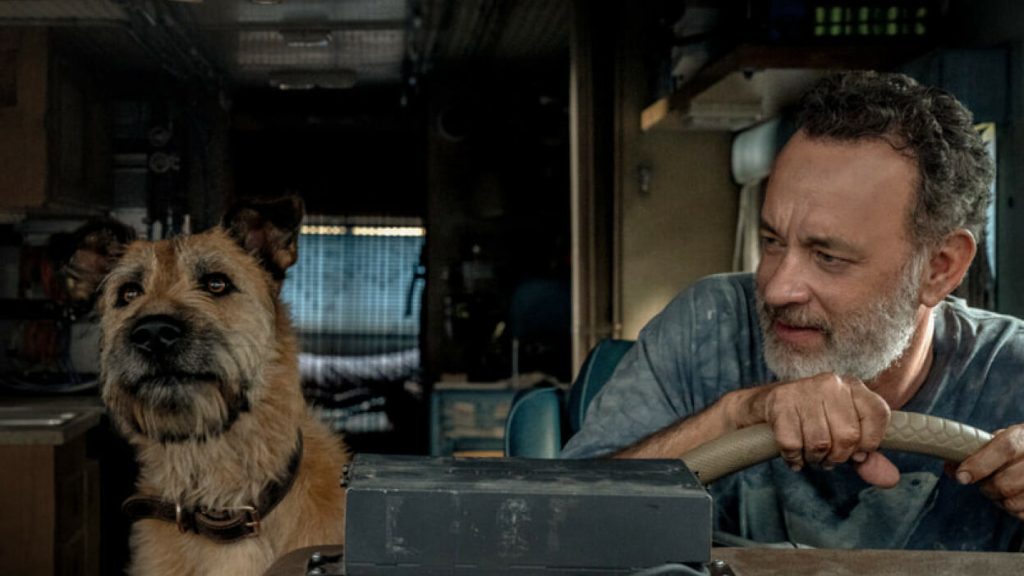 It’s Hanks’ second large-budget production (after “Greyhound”) to be plucked by Apple, but there’s no shame in the streaming fate of the Amblin-Reliance-Walden Media production. “Finch” is a genial blend of many things, not least Hanks’ affinity for playing goodness and kindness and hope wherever his character may find themselves in their miserable existence. Emmy Award-winner Miguel Sapochnik (“Game of Thrones,” “True Detective”) directs. Robert Zemeckis (“Cast Away”) is one of many producers.

Much is made of little in Jesse Moss’ fine “Mayor Pete,” streaming on Amazon Prime, a small, quick glimpse of the early days of what will surely be many presidential runs by now-Transportation Secretary Pete Buttigieg; proximity to the cautious then-mayor of South Bend, Indiana is tempered by the openness of his husband, Chasten, who appears an ideal complement to his partner’s all-too-apparent social shortcomings.