“The Beatles: Get Back”” 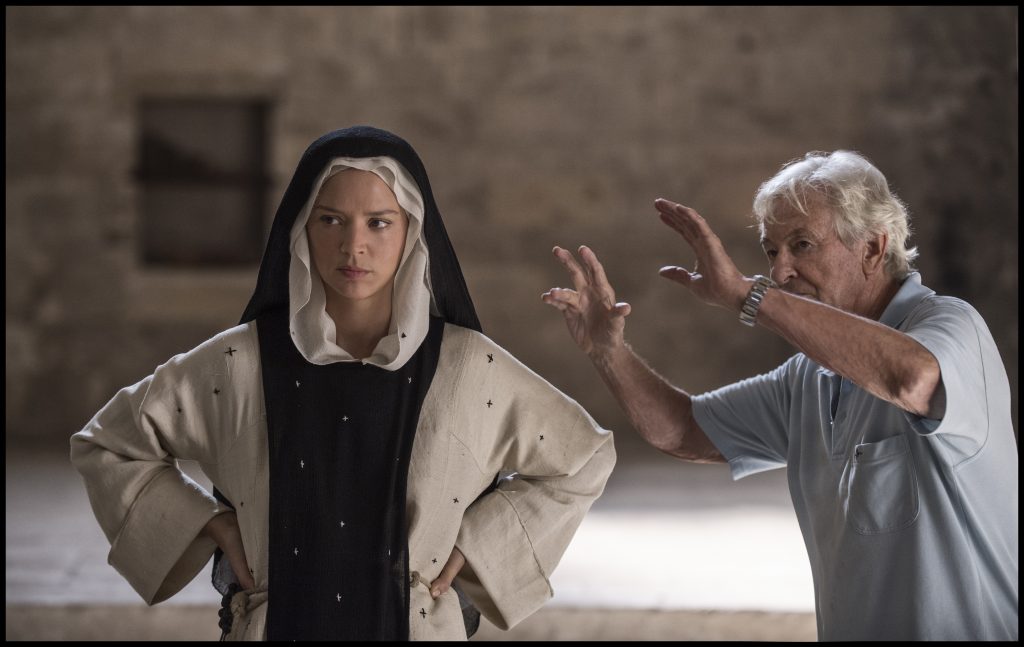 On social media, the Music Box has run images of protesters on their sidewalk that are preemptively protesting Paul Verhoeven’s “Benedetta” for ostensible “blasphemy.” (The Church-blazing banners are striking underneath the marquee advertising the “Sound of Music” sing-along.) The pious become furious and go mad in a time of plague and repression: not for nothing is the eighty-three-year-old Dutch master known for turning historical fact into seething flesh and blood. (And also for satirizing the historical moment and our historical moment: See “Starship Troopers,” “Robocop.”) Trailer here. Opens Friday, December 3 at the Music Box and on-demand around Christmas. 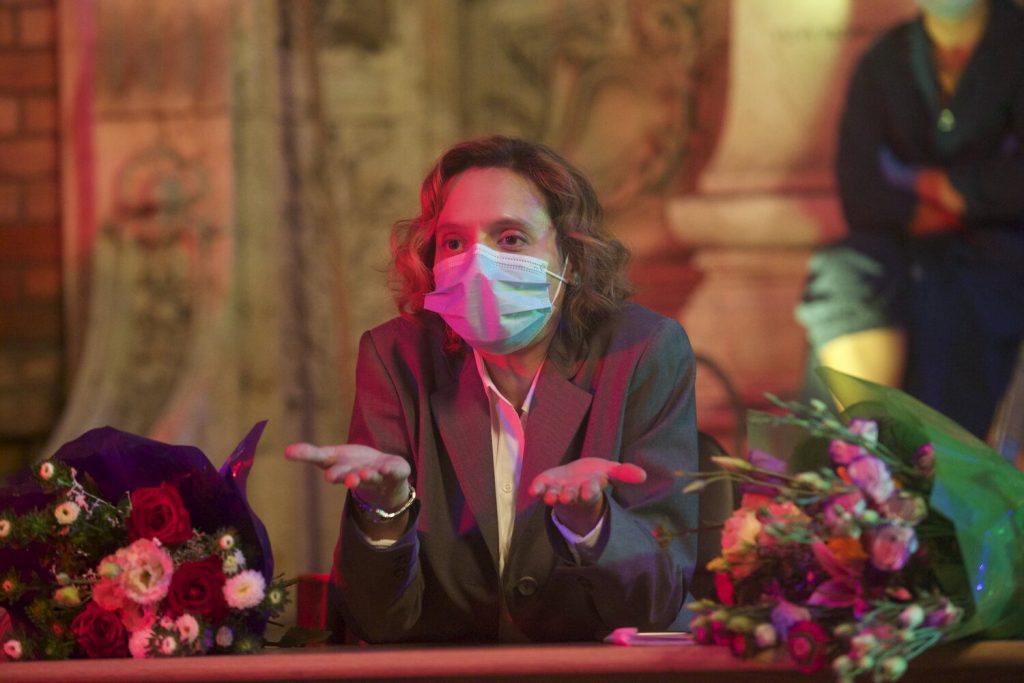 Radu Jude’s bristling comedy-drama-essay film “Bad Luck Banging Or Loony Porn” (Babardeala cu bucluc sau porno balamuc) seethes explosively despite the poker-faced calm of its visual style. Barbed, funny, and at times offhandedly savage and brutal, the movie is in control yet also at wit’s end. There’s an air of resignation from its characters, not so much bitterness but irritation, and exhaustion from one rude disappointment after another, decade after decade. “Bad Luck” opens with the playful but sloppy video of relations between schoolteacher Emi (Katia Pascariu) and her irresponsible husband Eugen (Stefan Steel), shown in the center of the screen, bordered in pink. Somehow, the video is uploaded to the internet, taken down, uploaded again, and the parents of her students demand her dismissing, which she refuses. Emi’s annoyance, then anger, and her refusal to bow takes up the first part of the film, followed by a dictionary of obscenity, in which Jude courses in an essay in definition form through the history of hypocrisy and oppression in Romania and Europe. This passage is filled with bitter, biting epigrams that a friend would snap or a stranger would tweet: it’s breathtakingly harsh, direct, and gravely funny. It plays like a rapid-fire, rancid daydream, as if the movie or the country itself fell asleep in the middle of the twentieth century and is still tossing and turning with horrors.

Emi walks down the choked, busy streets and sidewalks, and the camera follows her, after a fashion. The widescreen image goes drifty-dreamy, moving away from her with the same steady moves in each shot to survey the streets she traverses from one humiliation to another, surveying storefronts as she passes, but also detaching from her point of view to a gander at higher stories, billboards and statuary, to look upon the ghost traces of shuttered buildings, the ironic remnants of weather advertising. The sound of the city continues, a matrix of fumes and fuming: just about everybody is ready for a fight, and several erupt around her. There’s a lot of commonplace architecture that resembles that of other countries in the region, as well as commonplace disrepair and abandonment. Voices bark. Threats rise. Tempers simmer and erupt. It’s a fucking disaster! [A longer version of this review is here.] “Bad Luck Banging…” opens Friday, December 3 at Siskel. 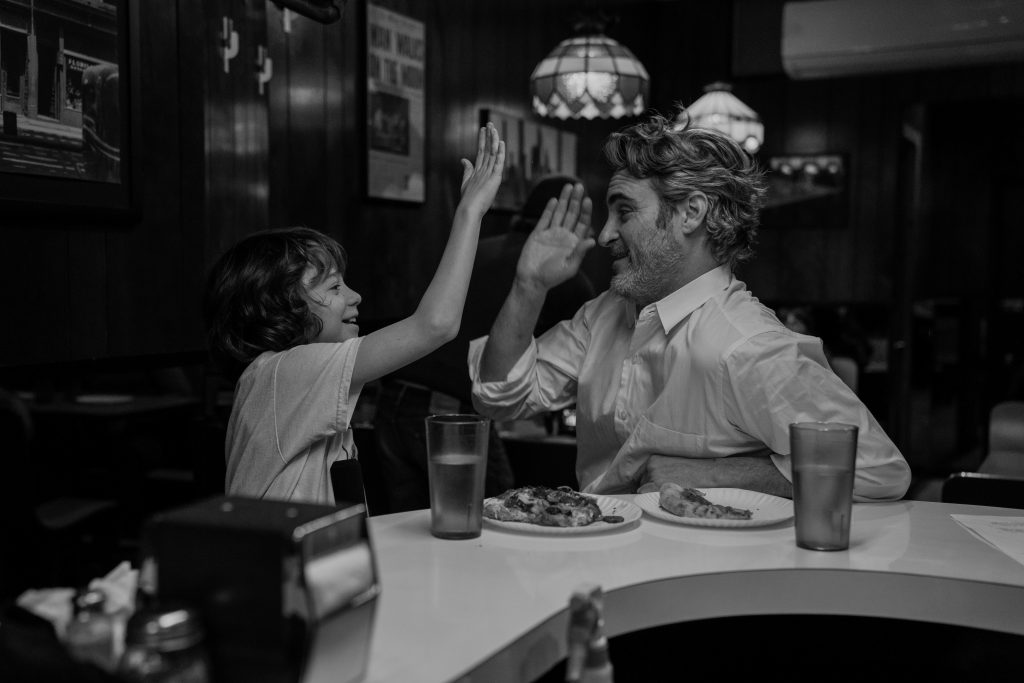 Mike Mills’ “C’mon, C’mon,” is so very good and yet it is at risk of getting lost in the cascade of releases hitting theaters through the end of the year. Mills’ portrait gallery of his dense, bittersweet, lovingly detailed family impressions—”Beginners,” “20th Century Women” —is joined by “C’mon”; first, his father; then his mother; and now, a metaphoric journey that evokes his own present day as a father of a nine-year-old son. There’s a lot to soak in within the post-Wim Wenders black-and-white road trip of Mike in the cities with boy: a journey across four American urban areas with Joaquin Phoenix as the uncle of a boy, starting with the startlingly beautiful cinematography by Robbie Ryan (“The Favourite,” “Fish Tank,” “I, Daniel Blake”): street level yet effortlessly mythic. The larger enterprise is graced by the performance of Woody Norman as the nephew. He and Phoenix spark and parry tenderly in their cross-country moment of discovery. Landmark Century, River East.

A colloquy of commentary on Sir Peter Jackson’s 468-minute documentary, “The Beatles: Get Back” resounds across social media: the technical machinations of the two-plus years of editing its 16mm footage kept me antsy, as well as its tinkering with duration. Others, for reasons enumerated below (from slightly edited postings) are enthralled: one observer has gone so far as to tweet that it’s “the most important cinematic event since ‘Twin Peaks: The Return.'”

Writer-director Duncan Jones (“Warcraft,” “Mute”): “This definitely feels like a show where if it’s not for you, really makes most sense to just keep quiet and move on. Not everything is for everyone.”

Screenwriter Zack Stentz (“Thor”): “A lot of critics are dismissing ‘Get Back’ as overlong & indulgent while musicians, TV writers & other people used to working in creative collaboration with each other are loving it & really relating to the look into the Beatles’ creative process.”

Filmmaker Alex Gibney: “I didn’t like the quality of the footage restoration which made 16mm look like soft-focus video. Was that a choice or a necessity if wanting to restore lost frames?… Standard 16mm is 1.37:1. If blown up to widescreen (16×9 or 1.85:1) a lot of picture would be lost.”

Filmmaker John Magary (“The Mend”): “Of course it’s all well and good that Jackson cleaned up the spoken audio in ‘Get Back,’ but there’s little effort to factor in camera distance or reverb or the tech of sound eqpt from the time, so the audio ‘world’ of the project ends up kind of off-putting. They’re in a giant studio with fifty-foot ceilings and there’s no reverb. No bounce. It’s odd. The de-noising of the footage makes it all look like DVD resolution. It’s ugly. Unnecessary. It doesn’t ‘sharpen’ anything,”

Musician A. C. Newman (New Pornographers): “What I like about the Beatles doc is that you really feel like you’re there. The slow meditative vibe of it. Time doesn’t fly by. After an hour-and-a-half, I felt like, ‘This is really good but I think I’m going to go home, guys. Sounding great! See you tomorrow!'”

Writer-producer Mark Frost (“Twin Peaks”): “The genius of Get Back: this story—the end of the band—has been told 1000 times. Here it’s SHOWN, unfolding in real time—looks, gestures, body language, familiarity—as four of the world’s most famous people are conjured up in full immediate life, an act of intimate sorcery… Always wanted to be a fly on the wall in one of their recording sessions. Peter Jackson, you magnificent bastard, you made a masterpiece.”

Chicago filmmaker Lori Felker on Facebook: “I’m all in on ‘Get Back.’ I had watched ‘Let It Be’ so many times as a teen, it’s like that movie finally grew and exploded. Watching process and personality is fun. I wish every band I love had sixty hours of songwriting/recording material.“

Screenwriter Ed Solomon (“Men in Black,” “No Sudden Move”): “I’m struck by: Their music is so much a part of me it’s like finding lost home movies of my parents as kids; It’s the exact dynamic of a TV writers’ room (except for, well… The Beatles); Watching Paul create ‘Let it Be’ and ‘The Long And Winding Road’ live is… sublime. Ringo being much more of the glue than I’d realized; George’s insecurity; How John & Paul connected musically, even when they hated each other; How a camera in the room means I can’t really trust most of it simply cuz they always knew they were being filmed. Having witnessed tons of people who are used to being filmed all the time, they’re keenly aware of the camera at all times, and they adjust their behavior (even subconsciously) for it. Therefore one has to peer between the cracks to see the *true* dynamics.”

Writer Mark Athitakis: “Watching ‘Get Back’ and learning how Yoko destroyed the Beatles by sitting quietly and reading the paper and sorting through her mail.” Marie Bardi: “Yes, I’m a feminist; yes, I support other women; yes, I think it’s weird and annoying that Yoko is just sitting there all the time during band practice.”

Sir Peter: “I have included all the best stuff. I’ve included all the stuff I think is absolutely historic, must-see, can’t go back in the vault for 50 more years. I was very much aware, whatever I didn’t put into this film, there’s a danger it might just get locked away for fifty more years.” Sir Peter to Variety: “When I started working on it with Jabez [Olssen, his editor], we had 130 or 140 hours of audio and sixty-odd hours of video footage, and so we thought, ‘Let’s at least just get it down to something that we can manage.’ That’s when the eighteen-hour cut happened, but the plan was to keep going and make it two-and-a-half hours. And then the pandemic happened.”

Or, as Slate editor Sam Adams put it, “Get back to where you won’t be long.”