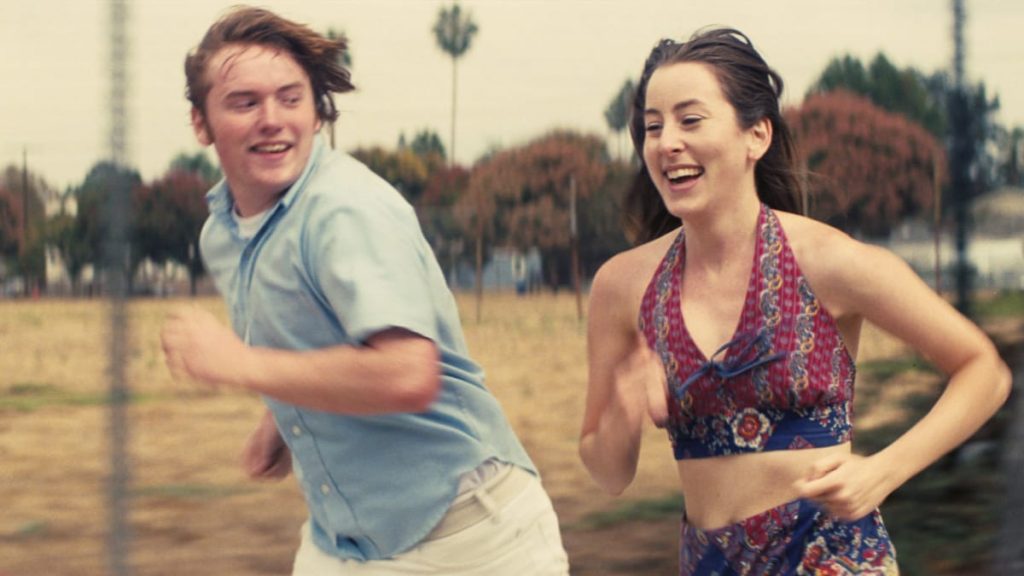 Call it “Boogie Golden Hours”: Paul Thomas Anderson’s “Licorice Pizza” is a delicious, incident-filled but quietly complex vision of coming of age in the year 1973 in his well-traveled precincts of Encino and environs. Alana (Alana Haim) and Gary Valentine (Cooper Hoffman) meet on a high school picture day—she, twenty-five, works for the ass-slapping photographer; he, fifteen, is a baby macher bent on swaining her despite their gulf in experience. The Panavision frames are literal swoons; sustained takes, often via Steadicam, that sometimes puppy-dog the characters but more often than not capture in limber, adroit compositions the emotional center of scenes that are often about discovering one’s emotional center. (Anderson remains among the most accomplished long-take One-er Boys; you can see how much he has learned from the fluid, fluent camera of twentieth-century master Max Ophüls.) The urges and surges of a fifteen-year-old boy and a twenty-five-year-old woman are pronounced but decidedly different, even in a weird, close, chaste relationship like that of Alana and Gary.

A lot of Gary’s misadventures are reportedly courtesy of Anderson’s friends, the producer Gary Goetzman (“Larry Crowne,” “My Big Fat Greek Wedding,” “The Silence of the Lambs”), who, like Gary, was a child actor, and who, by this account, bounded into a very, very shaggy-dog 1970s Southern California at a young age. There’s no real need to know that seeming digressions are drawn from real-life stories told time and again; Anderson makes the most of asterisks upon superscripts within footnotes and makes them fresh and surprising and seemingly casual wherever “Licorice Pizza” takes Alana and Gary over the course of two hours of a year or so of their lives. The moments that dip into fantasticated-seeming lore are stories that are retold and retold for a reason. Anderson introduces two inexperienced leads, Cooper Hoffman (son of the late Philip Seymour Hoffman) and Alana Haim (of multiple Anderson videos for the group Haim), and they’re as sweetly surprising in each loving detail of behavior as any of the “professionals” who’ve acted in Anderson’s seven previous features. Haim, with fiery eyes belied by a warm smile with slightly crooked teeth, is ridiculously charismatic, with liquescent screen presence. Alana’s Alana is both calm and quick to reaction, which keeps Gary’s pushy, sweaty, shameless salesman-racketeer’s compulsions at proper distance. Whenever Alana is outside of Gary’s schemes, the world notices her, even if it is just the world of older men in the San Fernando Valley of that decade, taking the form of wolves with nicotine-stained teeth. Alana is taken by whomever is poised to take her away.

As the canvas broadens, several unexpected performers are delights—what famous actor plays what famous actor intoning, “I’ll tell you about intimacies I’ve had with women, but don’t ask me about Kuala Lumpur!”?—but the largest of the cameos is Bradley Cooper in an extended role as Cocaine, under the character name of “Jon Peters.” (Peters’ entrance into and exit from the story are exemplars of comic timing.)

“Licorice Pizza” may be the closest Anderson has come to channeling the work of his master, Robert Altman, with overlapping stories and characters that don’t necessarily intersect in terms of plot, but cumulatively build unexpected and sometimes inexpressible emotional connection. The onrushing last ten minutes of the movie feel as Altmanesque as anything Anderson has done, lacking only an abrupt sudden death that lurks potentially in the film’s growing dark. But from dark comes light and from running, running, running, a destination arrives. The golden retriever and the greyhound have their moment that lasts as long as the image, until, resolved-not-resolved, it ambles into tender memory.

“Licorice Pizza” opens in theaters, and on 70mm at the Music Box on Friday, December 24.