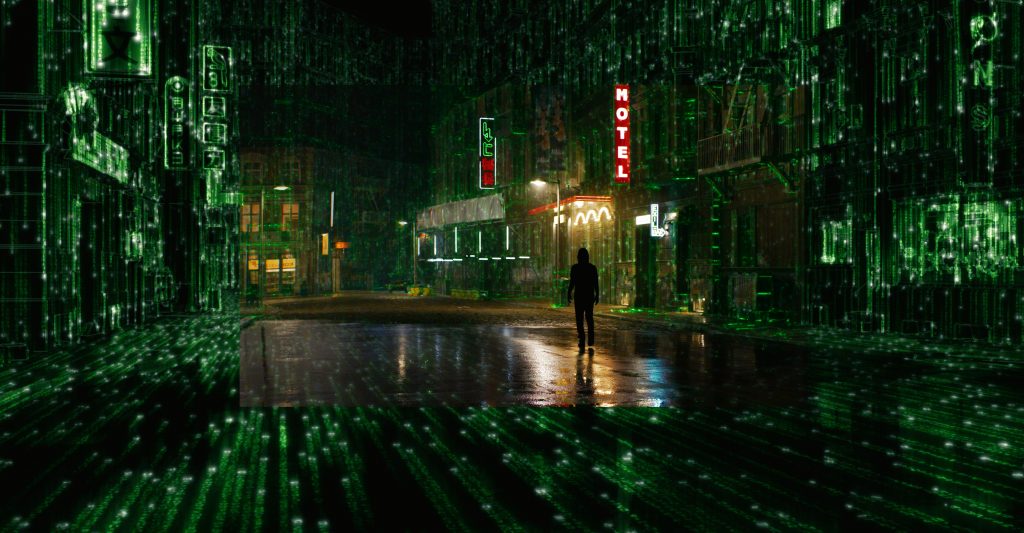 “Part of me feels like I have been waiting my whole life for you”: the deeply romantic, serenely goofy “The Matrix Resurrections” is as slippery toward its characters’ final fantasy as the steampunk squid ships that spiral the bowels of the film’s dark lower world.

Behold the illusion of choice in a melancholy, often beautiful assemblage that portrays capitalism—nothing “late” about it—as schizophrenia. The opening forty minutes or so of Lana Wachowski’s epic comprise a bright and poppy and eventually, natch, explosive ouroboros of the life of Thomas Anderson, designer of a video game trilogy that the world (and “our beloved parent company, Warner Bros.”) demands. (Autobiographical content for the filmmaker? Let’s keep moving.) In the form of “sad Keanu,” Thomas is troubled. He doesn’t want this life. He doesn’t want to live by this pill, die by that pill, for years or eternities to come in a form of semi-futuristic San Francisco.  Then one day, Thomas glimpses a woman, or a reflection of a woman, or a woman through panes of glass in a café on Kearny Street, called Simulatte: “Tiffany”?!

Lana Wachowski’s movie, co-written by novelists Aleksandar Hemon (writer of exile, “The Lazarus Project”)  and David Mitchell (worlds of recombinant perception like “Cloud Atlas”), is flippant and serious as a bomb. It is as wildly hopeful about the matter of romance as canonical greats like Borzage (“History Is Made At Night”) and Murnau (“Sunrise”) and Powell-Pressburger (“A Matter of Life and Death”) and bluntly meta about the edifices of its very premises. (The trio also wrote in varying capacities on the Wachowskis’ series “Sense8.”) All those other movie titles could nestle nicely atop “Matrix Resurrections.”

Or maybe, maybe it’s just “It’s A Wonderful Life”: What would the lives of others, Neo, what would the lives of others be without you, Neo, such as Trinity? Multitudes! (There is also a foreboding passage of SWAT cops massed, magisterially spectral, in shadowed side streets that resembles the fog-of-history assemblies in late masterpieces by the Greek filmmaker Angelopoulos.)

In its open lambasting of its financiers, “The Matrix Resurrections” is also “Gremlins 3,” and it definitely got moist after midnight; there’s likeness, too, to the 1950s woo-woo years of comedy director Frank Tashlin in supple thigh-high spike-heeled black leather lace-up dom boots.

Lana Wachowski strides with serene confidence through an all-encompassing assault on the perception and popularity of the three films that came before, as well as upon the foolishness of a mass audience expecting a restless, emboldened artist to step into the same river twice. The antic assurance is there from an early scene, where we glimpse a beautiful red neon sign in cursive, setting the mood in Spanish: “Sabor a Mierda.” Its message is clearer a little later on ground level where the entry sign is in English, in exploding neon: “FOR THOSE WHO LOVE TO EAT SHIT.” 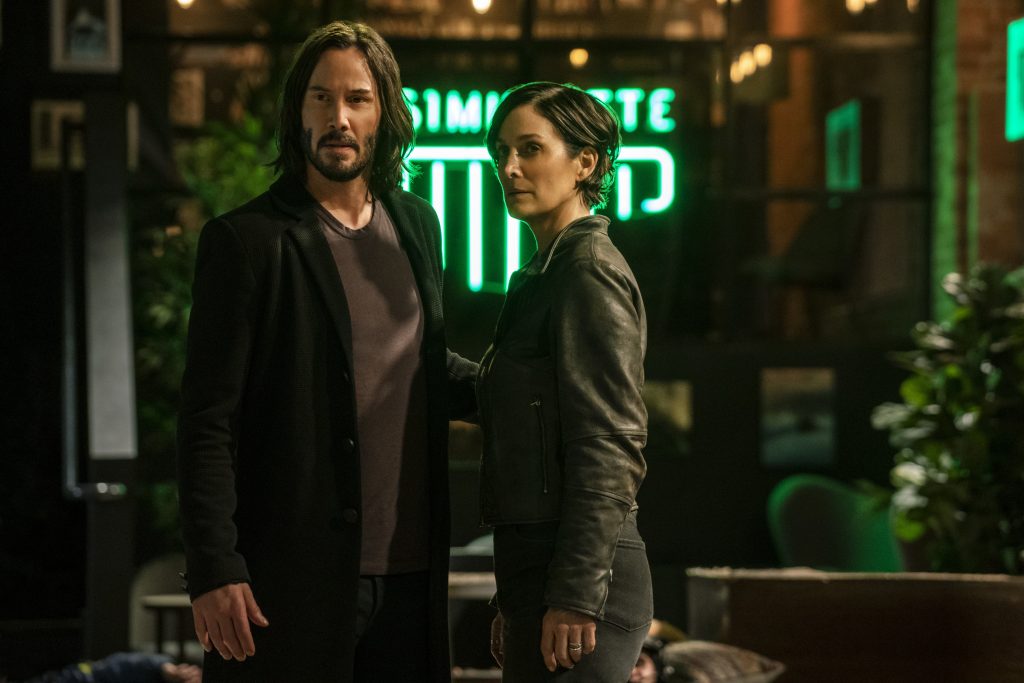 “The Matrix Resurrections” carries its internal contradictions with the feline grace of deadly, freak weather. It’s “The Martryoshka 4”! But you know what? It’s generous: for those who don’t love the city of Zion mythology, the movie is going to flow into something else pretty much straightaway. You come for fresh philosophical constructs and time-bending conundrums and you will also get Neil Patrick Harris’ ladder-striped socks, worn with pants at flood level. (And horn rims of a too-familiar translucent blue.) Welcome to “The Matrix Detournements”! “We’re all trapped in these strange, repeating loops,” and that sentiment stands months after the movie was written, produced and finally released.

The ending, ah the ending, a murmuration of angels in impossible Sirkian flight: this is the thrilling ending with God Keanu that the foregoing picture did not provide. But that thrilling ending takes flight nonetheless, painting the sky with rainbows across the digital immanence.