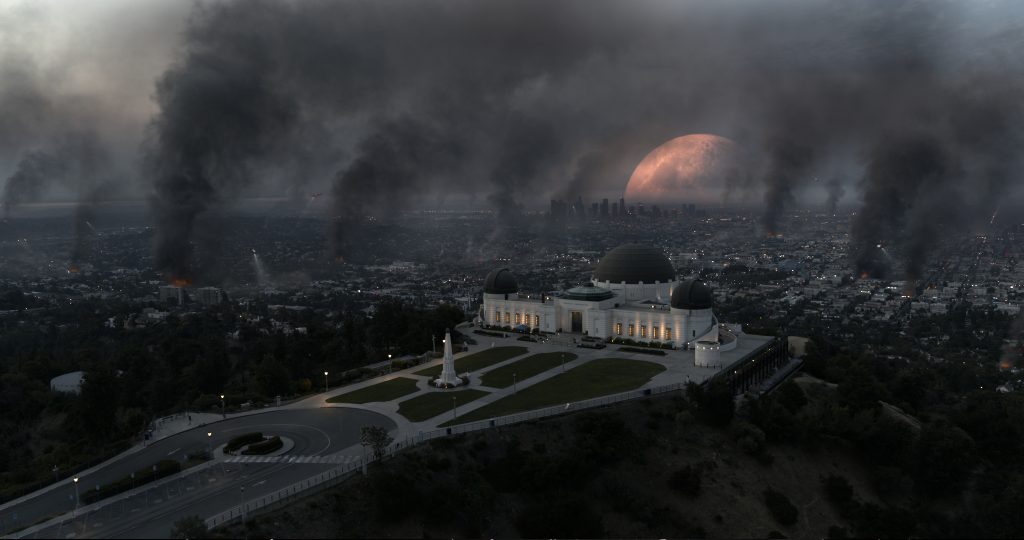 Catastrophe amuck! Roland Emmerich’s latest self-financed end-of-the-world bagatelle, “Moonfall,” comes to theaters with a series of serious silly promotions around its central premise: Earth’s orbiting orb is hollow, was made by aliens, and may go wacko any minute now, if not for the intercession of Patrick Wilson, Halle Berry, John Bradley and Donald Sutherland. Never a cramp in his camp! Also: “Jackass Forever” in the final incarnation of the series, unless geriatric hanky-panky is unleashed while all the parts are still (somewhat) intact. The restored “Out Of The Blue,” a lesser-seen Dennis Hopper masterpiece opens Friday, as does the Finnish “Arctic road movie” (the filmmaker’s words) “Compartment No. 6.” Among revivals: 1926’s “The Son of the Sheik”  with Rudolph Valentino and Vilma Banky will be accompanied by Jay Warren at the 1927 Mighty Wurlitzer pipe organ at the Silent Film Society at St. John Cantius, 825 North Carpenter. Also onscreen: “The Card Counter” at Facets and “Dawn of the Dead” at the Music Box. Newly restored and new to Blu-Ray: Lynne Ramsay’s 2002 masterpiece, “Morvern Callar“; we have a few words from the time of its theatrical release from the director. 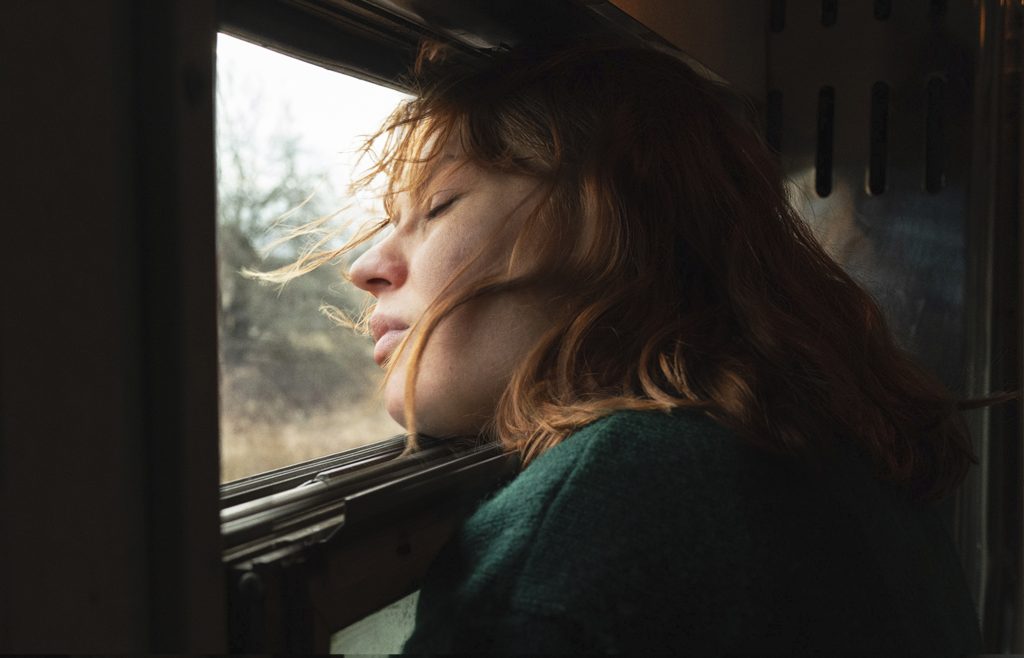 A 1990s-set arctic road movie: Juho Kuosmanen’s elemental yet often beautiful “Compartment No. 6” plays out an unlikely run-in on the route from Moscow to the arctic reaches of Murmansk, where a young gay woman, on the run from love, finds herself plopped into a cramped, trashed sleeping car with a Russian miner. Kuosmanen’s work rises above the claustrophobic setting into a choice brief encounter: unlikely friendships can be the most fascinating. The performances by Seidi Haarla and Yuriy Borisov are lovely, playing out complications that are nearly predictable yet wholly heartening. In theaters, Friday, February 4. 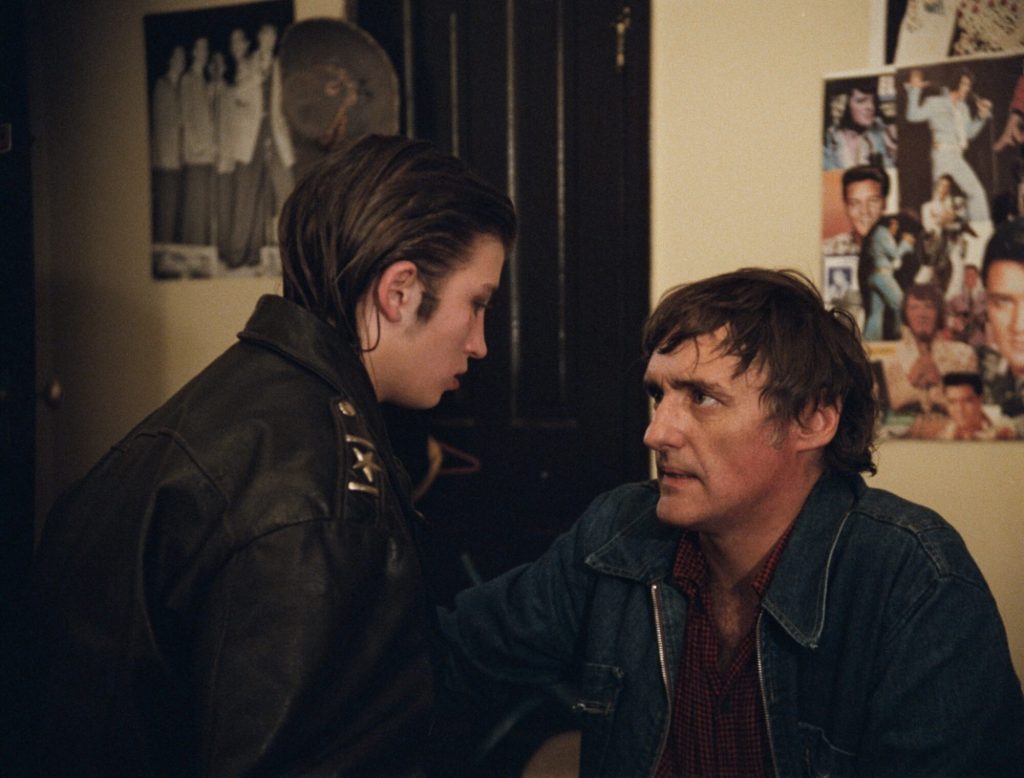 “Out Of The Blue”

“My My, Hey Hey (Out of the Blue)”: there’s a timely tune. Dennis Hopper’s vital 1980 masterpiece “Out Of The Blue” was almost lost, as well as an accidental production from the start in Vancouver: goofily appropriate considering its punk rock subject and milieu. (Hopper was acting in the film when the director was fired two weeks into production; orchestrated chaos ensued in rewrites.) A fresh 4K restoration more than four decades after the bold father-daughter tragedy was allowed to slink onto a few movie screens, the movie is graced with a fantastically feral performance by Linda Manz, only a few years after her ineffable debut in Terrence Malick’s “Days Of Heaven.” She’s a teen obsessed with Elvis and the Sex Pistols; Hopper is her father, whose past is, well, dark. (Sheila O’Malley has rightfully dubbed it “incandescently angry.”) The ending is daring and brutal. Opens Friday, February 4 at the Music Box. 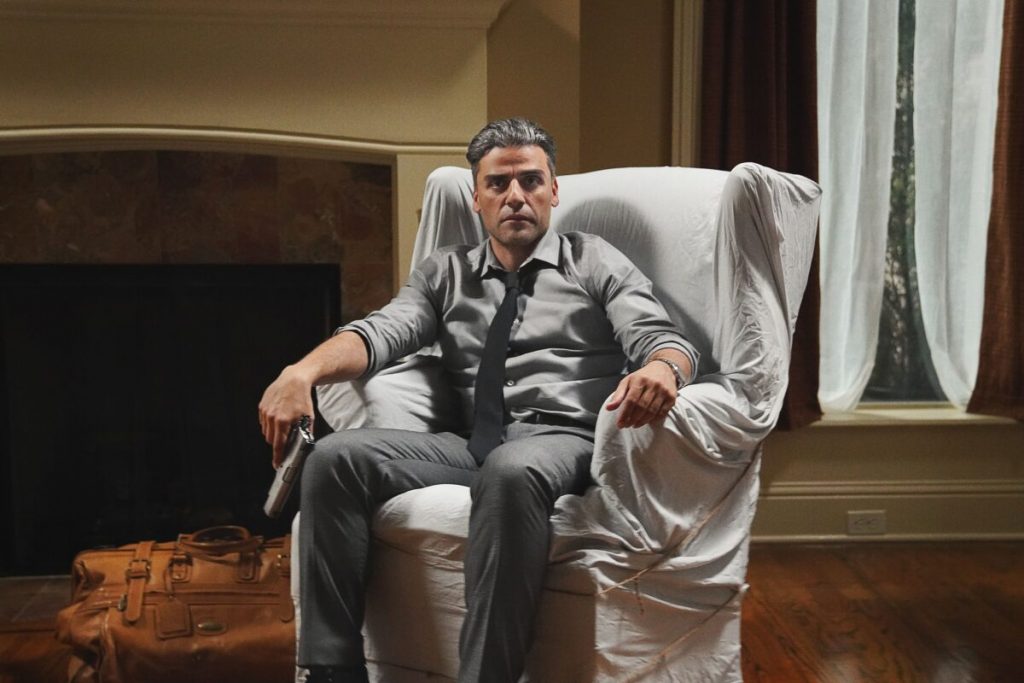 Paul Schrader’s strange yet galvanizing “The Card Counter” is on-screen February 4-6 at Facets, the weekend before Oscar nominations are announced. A screenplay nod for the grizzled veteran of Hollywood, indie cinema and Facebook? Possibly. “Blessed with an unsettled but also unsettling tone, upon which the story’s blunt narrative swoops with confidence, ‘The Card Counter’ is a story of an itinerant gambler with a brutal past (Oscar Isaac), who, like Travis Bickle in ‘Taxi Driver,’ hopes to keep past horrors from his head by filling the nights with repetitive activity. Schrader’s confidence aligns with his goofiness as well as characters’ familiar behaviors—writing out painful thoughts, drinking, misunderstanding women—and the result is both self-satirizing and captivating. There’s blissful freedom in the clunky moments, as in other Schrader screenplays, especially when the men are snapped out of fever dream into focus toward a female (Tiffany Haddish here) in front of them. The low-budget production (interrupted and reduced by the pandemic) has bursts of poetry: the film’s last shot in a giddy long take; a cloaking, Magritte-like visual motif; a vision of an all-American hell from which the character cannot escape.” More here. Tickets here. 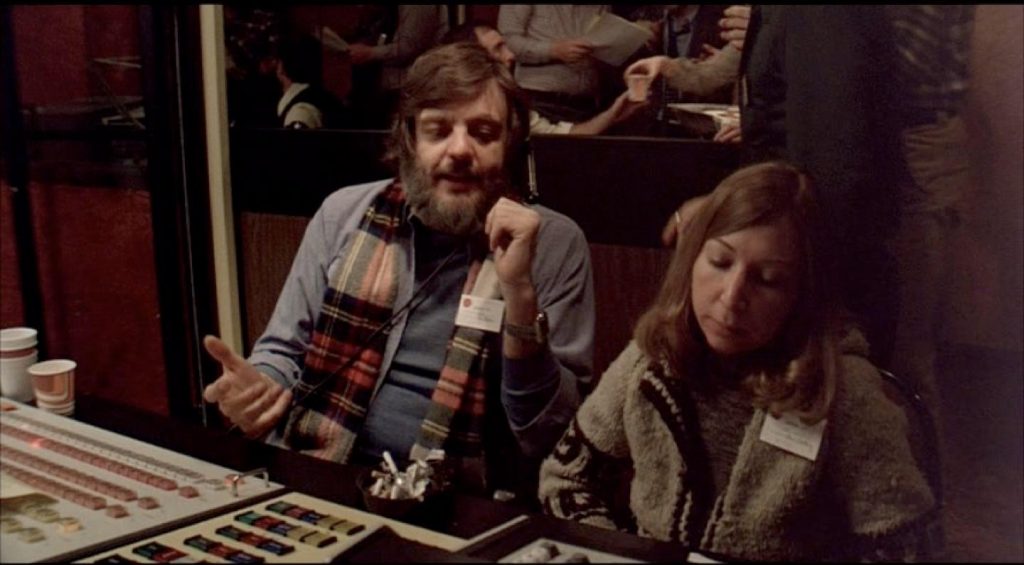 George A. Romero’s “Dawn of the Dead” gets weekend midnight shows at the Music Box. Never. Gets. Old. The mall’s open all night!

“The Murder Of Fred Hampton”

While Chicago Film Archives’ repository of the work of The Film Group remains free on their site [here], HBO Max is currently featuring the radical work of the late 1960s radical production collaborative, the works of which included “The Murder of Fred Hampton” [in its entirety on Vimeo here] and “American Revolution II.” The CFA writes: “The Film Group was a Chicago commercial film production company that made television commercials and political documentaries in the late 1960s-early 1970s. This collection includes their political documentaries on the 1968 Democratic National Convention including ‘American Revolution II’ and the educational series ‘Urban Crisis And The New Militants.’ Filmmakers associated with the Film Group include Mike Gray, William Cottle, Howard Alk, Mike Shea and Chuck Olin.”

Chicago Filmmakers has been approved for an American Rescue Plan Grant from the NEA, designed to help the arts and cultural sector recover from the pandemic. Chicago Filmmakers is recommended to receive $100,000 and will use this funding toward staffing, facilities, and marketing and promotional efforts to encourage attendance and participation. “The arts have been deeply affected by the pandemic,” executive director Brenda Webb says in a release. “The National Endowment for the Arts’ American Rescue Plan funding helps arts organizations get back on their feet and continue supporting and presenting art in a time where our nation needs inspiration the most.” The Chicago Filmmakers site is here. 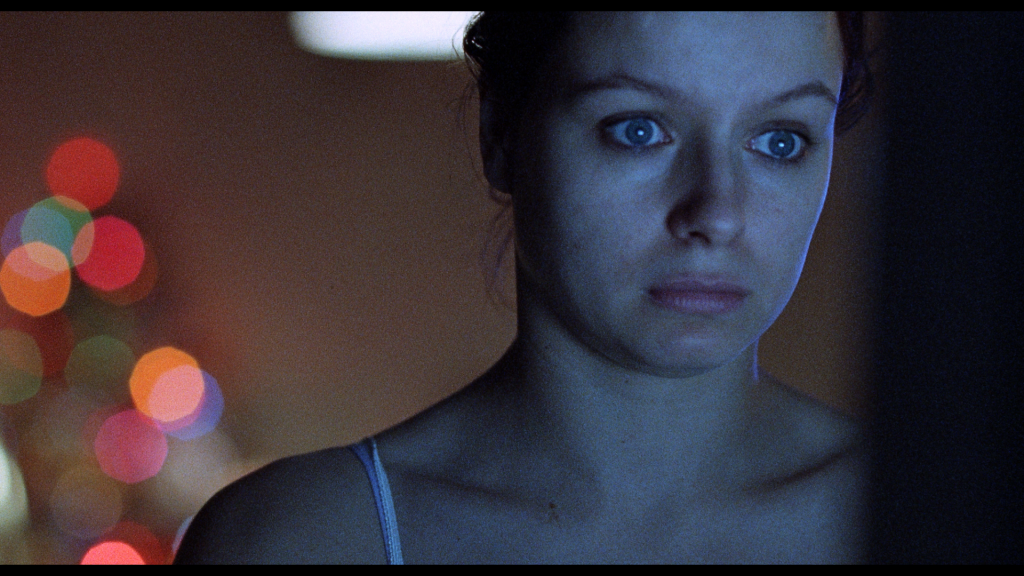 A splendid twentieth-anniversary 2K restoration of Lynne Ramsay’s 2002 hallucination “Morvern Callar” has been pulled from the sands of time and the indifference of financier and producer preservation responsibilities. (There are a lot of music rights to tend to as well: Can, the Velvet Underground, Aphex Twin, Stereolab and on and on.) Only her second feature, the beautiful yet opaque “Morvern Callar” is the sort of adaptation—drawn from Alan Warner’s dizzying 1995 fiction of the same name—that captures the essence of a tale, its mood and emotion more than the bones of narrative. Movies aren’t texts and plots; at their best, they’re pretexts to eavesdrop on behavior or to see through the eyes of a perceptive artist. And adaptations are not projects for the pedantically bookish; the most intriguing adaptations come when a director and her team–screenwriter, cinematographer, editor, music supervisor–find an unlikely and gratifying way to fashion someone else’s material to their sensibility.

“Autistic” and “childlike” are two of Ramsay’s favorite adjectives for both the run-at-the-mouth fiction and the behavior of the character. Morvern is a chain-smoking twenty-one-year-old supermarket clerk in a small, seaside West Scotland town. Her boyfriend commits suicide, resting in a streak of darkening blood on the kitchen floor. She opens his Christmas presents to her, pops in a mixtape he’s left for her. After a night out with her best friend, Lanna, she finds he’s left her money and his unpublished novel. What’s a girl to do? In the case of Morvern, she places her name on the title page and ships the printout to a big London publisher, gets rid of the body and lights off with Lanna on a package holiday to southern Spain. Lost on the dance floor and otherwise in search of some modest measure of human intimacy, her holiday’s interrupted by a visit from the publishers, who, over champagne, offer a staggering amount of money for her “brilliant” book. The journey begins.

Much like Hou Hsiao-hsien, Ramsay and her cinematographer Alwin Kuchler share a photographer’s knack for capturing the blush and blur of glimpse in an intoxicated instant, constructing an emotional subjectivity, a shimmering use of focus and focal lengths that disorient our perceptions at just the right moment.

Samantha Morton, whose face can move vertiginously from elation to lack of emotion, plays Morvern. She’s a modern incarnation of silent-era actors who were born ready for their close-up. Is Morvern opaque or inhuman? Is the story nihilist or one lacking a discernible moral stance? Just watch the face.

Pride: I scribbled the word tactile a lot during the movie. It’s almost as if the film could be a biography of Morvern’s fingertips. There’s this shot of Samantha’s hand trailing along a door facing…

Ramsay: I guess so. I think it’s kind of essential to the film, y’know. With Morvern and her dead boyfriend, obviously, they look like lovers at the beginning, which was intentional.

I’d read Alan Warner’s novel, it wasn’t a surprise to me, but it is sweet, that tiny glimpse you offer at first —did I see it, did I not?—of the slashmarks on his wrist.

Yeah, yeah, yeah! I know. But if you’ve read the novel, that’s the first scene of the book. She cuts off his hand with a kitchen knife or something. I used bits of monologue, but it’s a monologue that doesn’t really exactly explain the character. It’s more a chain of thoughts. Almost like a police interview, “I did this, I did that.” Lots of lists, kind of autistic, almost. Childlike. I felt like if I could get that into the film. How do I get this across, this character, that she’s almost autistic, where details get in her way? Something that Alan Warner said that struck me was the minute she commits the first banal act, after the death, she loses herself, she shuts down. I always saw her as a character who was very pragmatic, who didn’t analyze herself. When she put her name on the novel [when I read] the book, I thought, “Wow, that’s kind of quite punk rock, y’know.” I love the fact he kills the author on the first page and then you go to the supermarket, she takes over. I thought that was a stroke of genius. And I like the identity play, where she takes over his identity.

I’m interested in how Morvern was a muse to the writer. The boyfriend was stealing by or inspired by—

He wrote this novel for her, a tribute to her, to who she is. But then what we observe through your film, is essentially an unknowable woman. We watch thoughts flicker, eloquent but mute, across Samantha’s face. Here’s someone who’s supposed to have inspired a writer, but we have to invent her, project our need for a muse onto her just as he did.

Yeh! [laughs] I think that’s a really good interpretation. In terms of being a muse? I think I saw him probably as a writer, intellectual, who maybe saw something non-academic from her, drawing something different from her. She’s a muse who takes over, y’know? That’s what’s fantastic. I think he’s learned from her. But then she takes that back, while in the same process, losing her identity.