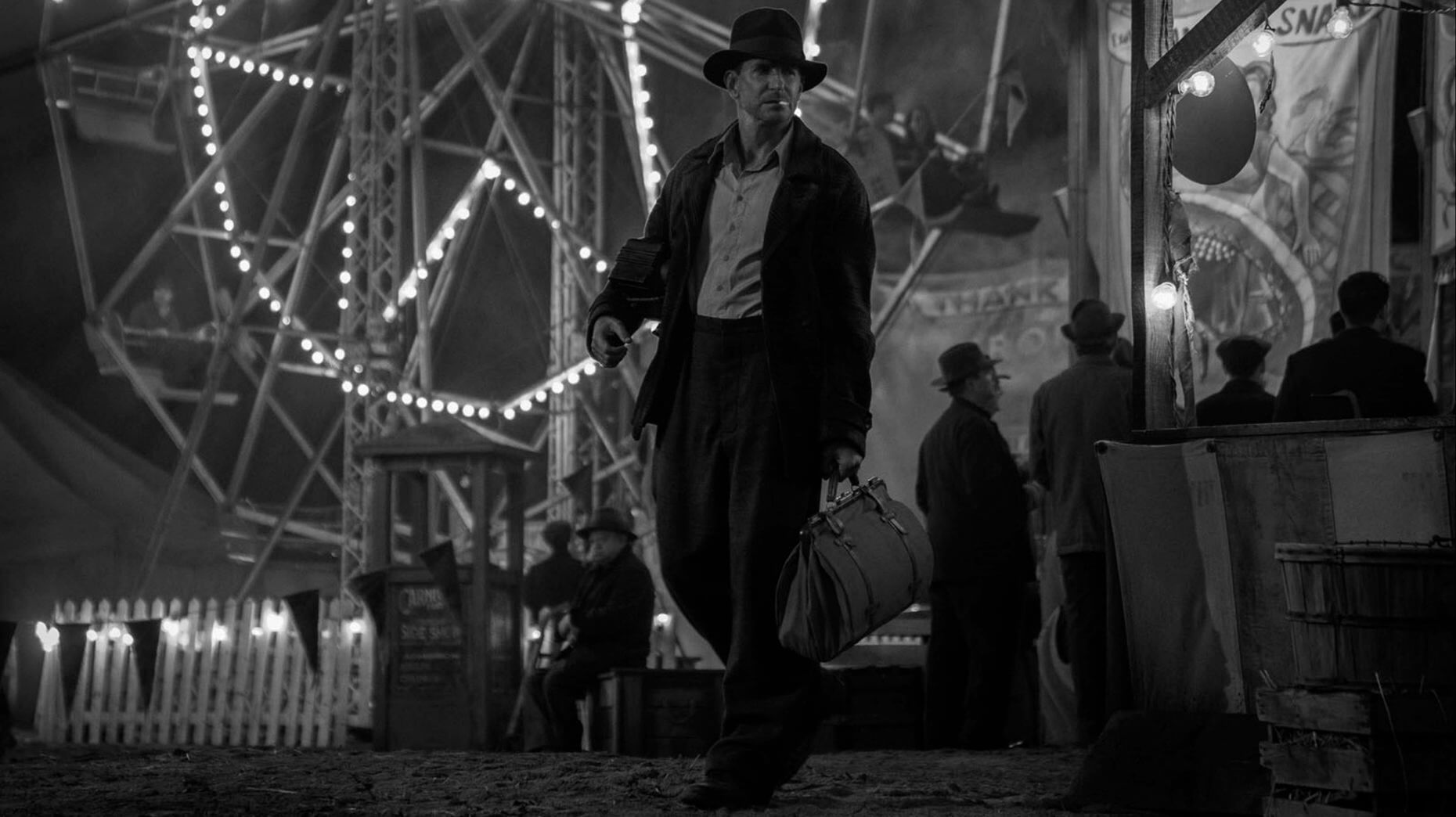 An eclectic week: The Foo Fighters have made a horror movie, “Studio 666,” with Dave Grohl confronting the supernatural while recoding the band’s tenth album; Netflix takes the Tyler Perry franchise from Lionsgate with “A Madea Homecoming“; Joe Wright’s delightful “Cyrano,” a musical adaption with Peter Dinklage as lead, with likable songs by The National opens; Documentary Oscar-nominated shorts open at the Music Box. (Animated and live-action programs open March 4.) “Bergman Island” filmmaker Mia Hansen-Løve’s superb, auspicious feature debut, 2007’s fragmentary “All Is Forgiven” (“Tout est pardonné”), made when the actress-turned-auteur was only twenty-five, continues this weekend at Facets. 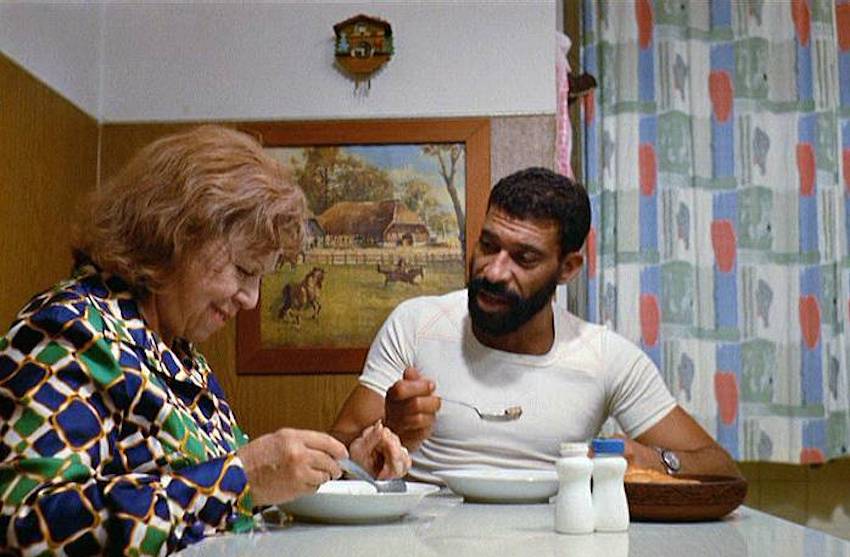 A Twentieth Century Studios woman-in-peril picture, “No Exit,” goes directly to Hulu: A woman (Havana Rose Liu) is stranded at a highway rest stop in a blizzard, alongside Danny Ramirez, David Rysdahl, Mila Harris and Dennis Haysbert. And how about “Nightmare Alley” in black-and-white? Plus: where to find the major Oscar nominees? Answer: mostly streaming. And: Sarofsky’s exuberant main titles for James Gunn’s “Peacemaker” and attractions announced for the 32nd Onion City Experimental Film + Video Festival. Revivals include Vera Chytilová’s “Daisies” (Saturday) and Rainer Werner Fassbinder’s Sirkian something “Fear Eats The Soul” (Sunday) at the Music Box. At the Siskel Film Center, a 35mm print of Elaine May’s “A New Leaf” (Sunday) alongside “The Blues Brothers,” also on 35mm (Monday); and Luis Buñuel’s culminating “bad romance,” “That Obscure Object Of Desire,” just as the surrealistic savant turns 122 (Saturday). Plus: revisiting 2011’s “Tinker Tailor Soldier Spy” on 4K in a beautiful restoration with a few words from Director Tomas Alfredson and Gary Oldman from the time of its initial release.

While Disney’s Searchlight Pictures made a mess of the mid-Omicron release of Guillermo del Toro’s alternately steely and voluptuous “Nightmare Alley,” which is now streaming on both Hulu and HBO Max, there’s consolation in hand in the relatively wide circulation of the black-and-white edition that del Toro has confected with “Nightmare Alley: Vision In Darkness And Light,” in 35mm, three shows only, Friday-Sunday at the Music Box. (The terrible title is likely due to an MPA rule that says only a single version of a feature can be in release at a  time.)

The Oscar show is Sunday night, March 27. In charge this year: producer Will Packer (“Girls Trip,” “Ride Along,” “Straight Outta Compton.”) Many contenders are streaming and are listed by provider, with links to our reviews.

Rental or purchase only: “Belfast,” “House Of Gucci,” “King Richard” (HBO Max April 7), “Lunana A Yak in the Classroom,” “No Time To Die,” all on Amazon or Apple

Apple TV Plus: “CODA,” “The Tragedy of Macbeth”

Sarofsky Titles For “Peacemaker” Another Hit

Writer-director James Gunn’s “The Suicide Squad” spinoff “Peacemaker” once again pairs the creatives and producers from cross-media production company Sarofsky. “Each episode opens with lead John Cena’s Peacemaker character performing a show-stopping dance number with his co-stars, colorfully setting the stage for the epic and the unexpected.” Led by executive creative director Erin Sarofsky [Newcity Film 50], creative lead Duarte Elvas, and managing director-executive producer Steven Anderson, Sarofsky also created custom titles, typography and visual effects for “The Suicide Squad,” and for both “Guardians of the Galaxy” volumes. Of the filmmaker, Sarofsky says, “We love collaborating with James. There is a trust and a shorthand built up at this point, that we don’t take for granted.” “Gunn conceived and filmed a choreographed dance routine with the entire cast, set to the glam metal track ‘Do You Wanna Taste It’ by Norwegian band Wig Wam. With the music as inspiration, the designers homed-in on a typographic treatment to nail the series’ bad-ass aesthetic.” “Duarte was an All-Star on this,” Sarofsky says. “He got to be very hands-on, and it shows with the precision and type mastery.” The title sequence is here. More on Sarofsky here.

Chicago Filmmakers announces the opening-night presentation and other special events for the 32nd Onion City Experimental Film + Video Festival, which will be presented in partnership with the School of the Art Institute of Chicago, Cine-File, Chicago Film Society and Nightingale Cinema. All special presentations will take place at in-theater screenings only. Competition film programs will be announced in the coming weeks and will be screened both in-person and online. “After two years of mostly virtual programming, I wanted to give our audience more unique opportunities to see experimental film and video on the big screen,” festival programmer, Zachary Vanes says in a release. “Chicago is such a wonderful place to be a cinephile because of the filmmakers who have called it home and the organizations that have provided a space for films to be seen and discussed. I hope that these screenings will inspire viewers to engage with the local history of experimental moving images and the broader state of the art on equal footing.” The fest begins March 31 at the Siskel Film Center, with “An Evening with Dani and Sheilah ReStack.” Co-presented by Conversations at the Edge at SAIC, the artistic duo will be on hand for a discussion following the Chicago premiere of their “Feral Domesticity Trilogy,” three radical explorations of queer desire, parenthood, and creative community. Other co-presentations will be held at Chicago Filmmakers’ Firehouse Cinema, 1326 West Hollywood and will include a digital restoration of “The Bloody Child,” Nina Menkes’ 1996 non-linear retelling of a murder investigation on a U.S. military base; and a collection of 16mm short films made by Sharon Couzin, a significant figure in building and promoting the local experimental film community. 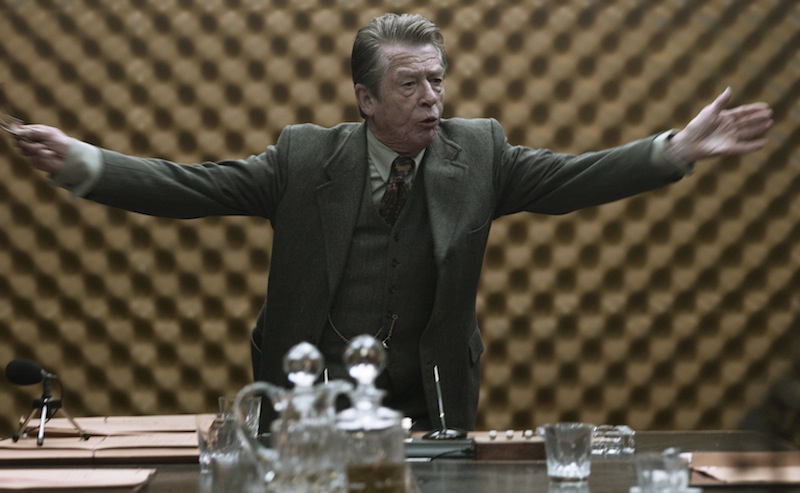 “Tinker Tailor Soldier Spy,” a labyrinthine tale about British espionage and spycraft, is an adaptation of John le Carré’s 1974 novel, from Tomas Alfredson, the director of “Let The Right One In.” Kino Lorber’s just released a gorgeous-looking and sounding restoration via rights-holder StudioCanal, available in both Blu-Ray and 4K Ultra UHD discs from Kino Lorber Studio Classics. We talked to Alfredson and co-star Gary Oldman while the making was still fresh, before its 2011 release. This “Tinker Tailor” holds up beautifully and how more timely could it be with the likely freeze settling in from a new Cold War brought about by Putin’s Russia advancing into Ukraine?

George Smiley (Gary Oldman) may not even know it consciously, but he’s just waiting to spring cruelty on someone. After a botched mission, a search for a double-agent in Britain’s MI6 begins: the complex interlocking narratives are enacted by a brilliant, precise Oldman, but also John Hurt, Mark Strong, Ciarán Hinds, Tom Hardy, Benedict Cumberbatch, Simon McBurney, Toby Jones and Colin Firth. “Please don’t shoot the book or remake the TV miniseries [made in 1979 with Alec Guinness]. They already exist,” Alfredson says Le Carré told him.

Each level of imagery is immaculately imagined, especially Maria Djurkovic’s production design, creating a world the color of whiskey and tea and nicotine—not nostalgic, but muted and drawn—curtains, sheers, windows, dividers, glass: things obscured, things observed in pearly drab. This is the top of spycraft in 1973. But with today’s technology, in everyone’s pocket, everyone’s a spy, everyone’s being spied on. “It’s just not the same world any more, is it?” Oldman tells me. “I mean, could you have a mole, in the same way?”

Alfredson lays it out this way: “If I have a secret, and you know about my secret, and you tell him that you know about my secret, that thing is interesting only if I don’t want you to know that secret. Everyone knows everything, you could find out anything about anybody. I saw this ad the other day, ‘Protect your emails from someone jail-breaking into your mailbox,’ and I thought, what the hell would people read in my bloody mail. Ordinary conversations with people! It’s not that secret. What’s this big fuss? Why is that important to protect? But the whole Cold War thing was built upon the idea that I have this secret and you shouldn’t know about it, and it escalated to these enormous proportions. Information is something different today. I saw on television right now what’s happening in Syria with people shooting from their mobile phones and sending it directly to CNN.”

“Tinker Tailor” also conveys another dark art, British film acting. Everyone surrounding Smiley, with every little gesture, they’re being perfect spies, too: how much can I hold in reserve, how much can I allow to slip out, how much can I pretend to be someone other? It’s a bold challenge for a director working in a new country in a second language. “It was,” the fifty-seven-year-old Swedish writer-director says. “It’s quite striking when you come as a foreigner to England because the whole English code, to socialize, is about, ‘Hello! How are you!’ Dut-duh-duh. It’s like a game where everyone is extremely polite, yet protects something. It’s a perfect thing for a Brit. Where I come from, we’re quite stiff, but you can read people more easily. To read that code, for instance, this is a country where homosexuality was forbidden until 1967. It’s a medieval thing if you would think about it today, but it’s quite recent. And of course, that is a perfect soil for those things to grow in. The British invented the whole thing and exported it to the Americans, spycraft, the intelligence service is British-invented.”

“Also,” Oldman adds, “which the film touches on, albeit briefly, there was homosexuality, it was frowned upon, it was illegal, it was like, sodomy was like life in prison. It was rife… and accepted… within the walls. It was the universities. It’s all that, where [one of the spies] says [when caught out], ‘Oh there’s a boy, bung him a few quid.’ I’m not shocked, it’s just all part of the fabric.”

These are all elements of repression, taciturnity. And the film has a lot of men crying. “Yeah, yeah,” Alfredson says. “Four. Four crying men. Yeah. A taboo in those years. In that country. And in that trade. It’s totally taboo to cry. These are the guards of the country, of Queen and Country. We see them cry. It’s quite nice! You could see how fragile they are, and these are sensitive people, and they have to be. If they’re good at what they do, they have to be sensitive. It’s very… double. My girlfriend can say to me, ‘Oh, you’re so sensitive!’ And I can say, ‘Well, if I weren’t sensitive!’—

“‘I wouldn’t be a great director, would I?’ Of course they feel things and get moved. But they live in this imaginary world. They have to relate to stuff they imagine. They imagine this and that happening. They relate to this fantasy world. Worlds! Of course. They are very sensitive people.” The extras: Multiple interview snippets, and the audio commentary by Alfredson and Oldman is strong; the best bonus is a half-hour interview with John le Carré himself.