“Foul demons of the earth and air,
From this their wonted haunt exiled…”
—”Ave Maria” (translated)

An assured study of unrelenting darkness, Matt Reeves’ “The Batman” may be timely, but it offers little catharsis. A homicidal madman on a killing spree? Putin is like a Riddler with a lesser moral compass. A city torn to its core by violence? Sounds like most American metropolises right now, but especially Chicago, where many of its locations were shot.

The film opens with an intricate Halloween-night setpiece, drenched in the haunting sound of the funereal “Ave Maria,” where we spy through the widows of a gothic mansion what at first seems to be a ninja assassination but quickly reveals a costumed child at play; then, on a floor above, his father, the mayor, succumbs to a real bloody assassin, The Riddler.

Cut to the menace and anarchy of the city itself, an El train filled with the villainous mischief of a gang of young hooligans in Joker face paint seeking violence for its own sake, preying on a fellow passenger who made the mistake of just wanting a ride home. It comes to a head at what looks like the Brown Line station at Quincy, till Batman shows up, music giving way to gritty voiceover, culminating in his mantra, “I am vengeance.” Not surprisingly, the man he saves fears him as much as the criminals do.

The three-hour film noir unfolds briskly, an intensive study in the pervasive interplay of power, money and corruption in what seems like perpetual rainy night. Even brief glimpses of daylight are shaded in black.

Set twenty years after the unsolved murder of Thomas Wayne and his wife, and two years after their once-orphaned son took up his Caped Crusade, Reeves wisely forgoes yet another origin tale. Instead, backstory unfolds organically, shaping the narrative around the idea of orphans and the sins of their fathers. Bruce Wayne is barely present—no daylight, remember?—but Reeves creates an intermediate manifestation, called the Drifter in the press notes, between Wayne and the Batman, someone who can glide through shadows at night without being noticed.

Colin Farrell as The Penguin

Robert Pattinson is shrewd casting, his angular, brooding face well suited for the personality-less crimefighter—the brooder-in-chief—and he knows a thing or two about activating billion-dollar franchises built around creatures of the twilight, or the night. The casting of Zoë Kravitz as Selina Kyle, his spry and cracked-mirror-image ally in love and war, is equally inspired. She’s all feline and felonious, an uncaged yang to his yin. She brings the closest thing we get to levity—this ain’t no Marvel movie, and chuckles are few and far between, often triggered by clumsiness rather than zingers:

The casting is uniformly strong, with Jeffrey Wright playing James Gordon, the seemingly one good cop in a sea of bad cops, and Andy Serkis taking up the mantle of Bruce Wayne’s trusted butler-mentor, Alfred, with expected British gravitas. Most of Batman’s foes are mentally ill psychopaths, including the mostly unseen Riddler, but John Turturro plays the organized crime boss Carmine Falcone with the coldhearted charm we’ve been taught to expect in our Mafia bosses. And Colin Farrell’s Penguin is the prosthetic evil twin of Jared Leto’s Paolo Gucci. Talk about secret identity.

Director of Photography Greig Fraser’s chosen palette is chiaroscuro rendered in heavy black and blue; memorable images include a gunfight in the dark, with dancing pistol flashes providing the only light source and, later, Batman and Kyle’s Catwoman on motorcycles, shot from above, in a turbo-powered game of cat and bat. 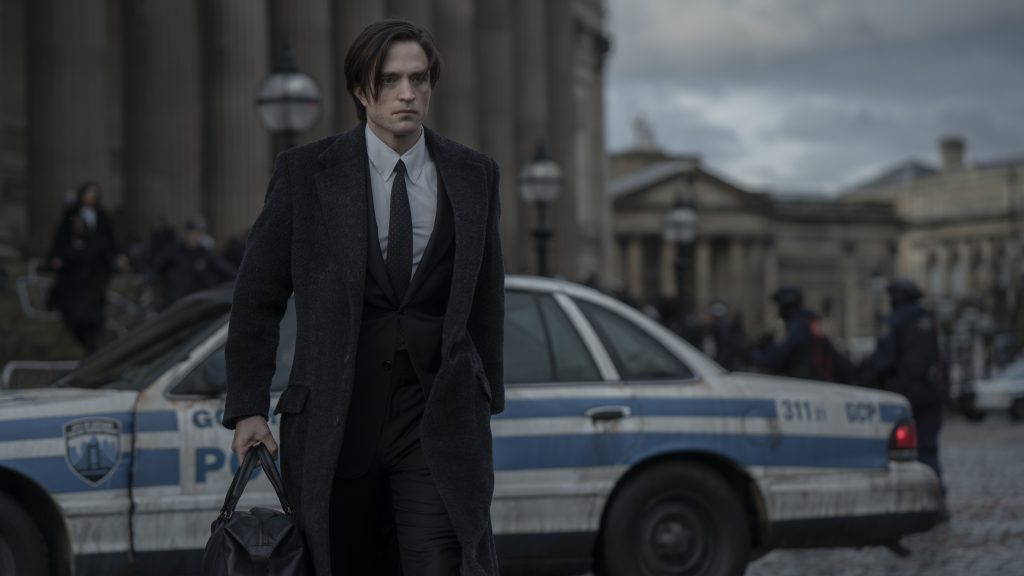 James Chinlund’s production design draws heavily on the legacy of Chicago’s Gotham-like tendencies as exploited by Christopher Nolan across three pictures, creating architectural mashups of landmarks like the exterior of the Thompson Center, which opens into a completely unfamiliar arena, or Gotham’s police headquarters, which is part Liver Building in Liverpool, part Chicago Board of Trade and part computer graphics. The Batman’s flight from its perch down LaSalle Street is an iconic wonder of camera plus computer.

In a city rent asunder by a murder spree against its corrupt leaders, surly crowds are surely found nearby. Their iconization of the Riddler’s question-mark insignia calls to mind QAnon, a parallel to (distorted) reality that grows as the narrative proceeds. But unpacking the politics of “The Batman ” is an exercise in frustration; shards of populism do battle with more traditional law-and-order themes, but ultimately the only explanation is nihilism, a sentiment underscored in the repeated use of Nirvana’s “Something in the Way,” with its tale of existential despair.

That Batman prevails is no spoiler, but as we’re seeing manifest day by day in Eastern Europe, as much as we want to, we can’t channel happy endings in the real world. In that way, Gotham’s perpetual despair seems about right.