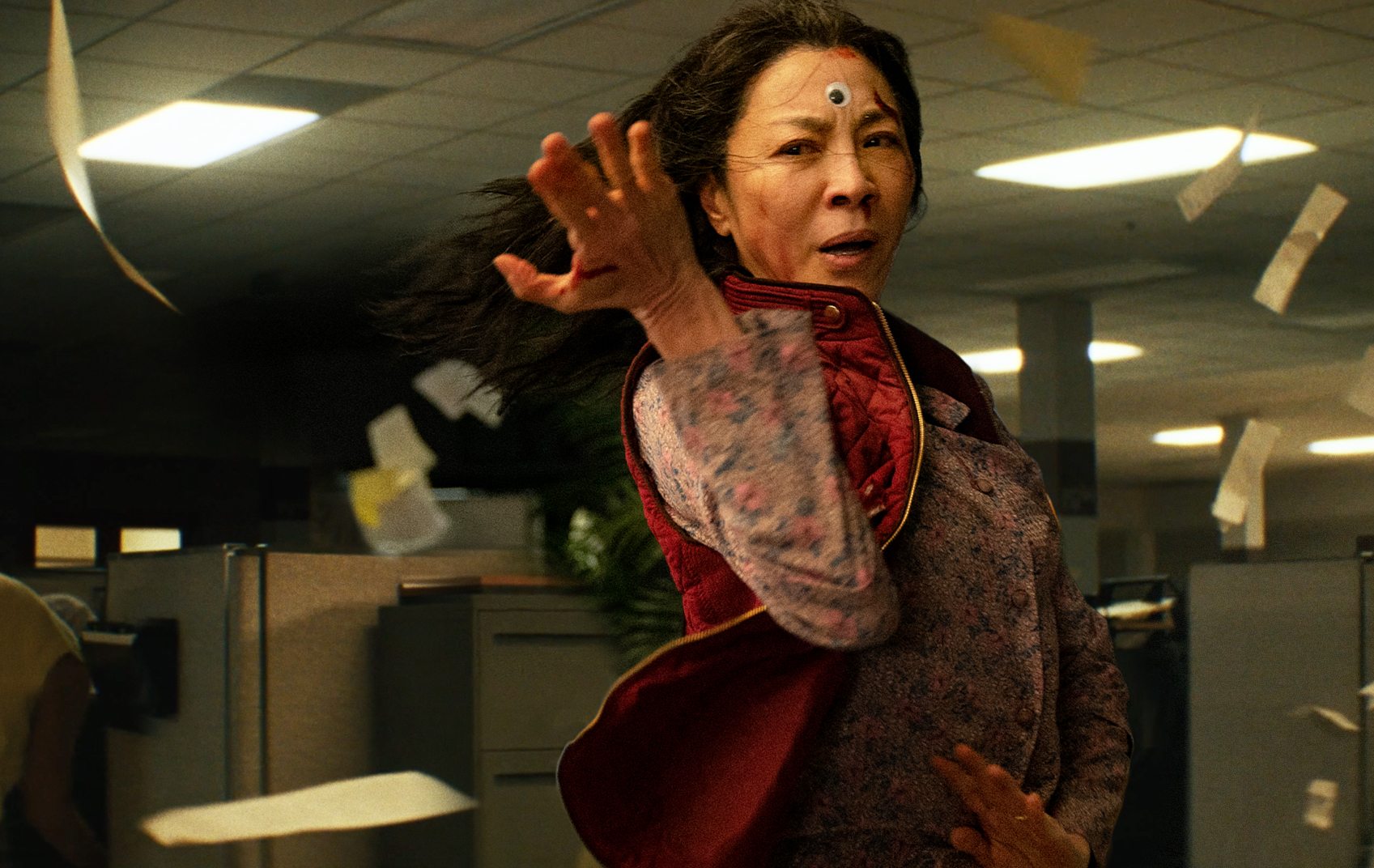 “Everything Everywhere All At Once”

Delicious history documentary “The Automat” makes a brainy meal of Manhattan’s past. “Everything Everywhere All At Once,” the second feature from the two Daniels (“Swiss Army Man”), stars the great Michelle Yeoh in a “sci-fi action adventure about an exhausted Chinese American woman who can’t seem to finish her taxes.” Multiple multiverses and googly eyes are promised. Noomi Rapace stars in Goran Stolevski’s gory nineteenth-century Macedonia shape-shifting horror tale, “You Won’t Be Alone” opening Friday at the Music Box. “David Lynch: A Complete Retrospective—The Return” starts Thursday, April 7 at the Music Box. Also at the Music Box: the magnificent madness of Nicholas Ray’s “Bigger Than Life” and Dan Savage’s “HUMP! Film Festival.“

DOC10 announces that it’s starting early, showcasing the documentary portrait of Vladimir Putin’s imprisoned political opponent, “Navalny,” next week at the Film Center before the film’s 800-screen release by Warner Bros. the following week. Joseph Losey’s unsettling tale of terror in wartime France, “Mr. Klein” returns to the Film Center, as does The Asian American Showcase. A Sony Marvel release, “Morbius,” introduces the long-running vampire character. Plus, Hong Sang-soo’s 2000 “Virgin Stripped Bare By Her Bachelors” is streaming via Facets in a new restoration with updated subtitles through April 22. And n+1 magazine has more than a few words on “How Hollywood Killed Celluloid.”

Rich yet melancholy, Lisa Hurwitz’s historical doc “The Automat” takes a bite out of the legendary, long-lost innovators, Horn & Hardart, who lasted more than a century providing good, cheap food to eaters in New York and Philadelphia from behind the glass doors of coin-operated machines. The memories are what make the movie, with reminiscences with Mel Brooks (who also gleefully makes a meal of the scenery), Colin Powell, Elliott Gould, Howard Schultz and the late Carl Reiner and Ruth Bader Ginsburg. Horn & Hardart’s crowd were people who weren’t necessarily welcome in other restaurants, including the working class, women and immigrants. “The Automat” is a touching time machine, a taut take on forms of everyday life that are no longer available. It’s one of the richest seventy-nine minutes in ages. Opens Friday, April 1 at River East, Streets of Woodfield, Landmark Renaissance Place.

The phosphorescent center of Nicholas Ray’s 1956 masterpiece of suburban paranoia, “Bigger Than Life,” is James Mason’s performance as a father whose delusions reach toward the heights of Greek tragedy under the influence of a then-experimental drug (cortisone). The slashing lines and bold color design have parallels in other films by Ray, but never with such cumulative widescreen terror. Godard liked to say that “the cinema is Nicholas Ray” and this brilliant hallucination lives up to that bravura declaration. Norman Rockwell on Dexedrine? David Lynch avant la lettre? Architecture as exploration of the crenellations of the mind? Yes, yes and yes. And here’s a taste of Truffaut: “Under Ray’s masterful direction, James Mason is given three or four of the most beautiful close-ups I have had the chance to see since the advent of CinemaScope. The trenchant direction imposes a terrific pace. The very opposite of a decorative film, but the slightest detail has an overwhelming beauty.” Oui.  Chicago Film Society at the Music Box,  Monday, April 4.

Many of Joseph Losey’s movies are identified as being part of a genre, but inevitably burst out as something strange, deeper, darker. Eventually, they were just “films by Joseph Losey.” A son of Wisconsin, classmate of fellow firebrand Nicholas Ray, Losey chose exile in Europe during the blacklist, and made radical camp—“Boom!,” “Figures in a Landscape”—as well as collaborations with Harold Pinter (“The Servant,” “Accident”). The French-language “Mr. Klein” (1976) was an American art-house hit in 1977, yet underestimated by the critical faculty of the moment. (Vincent Canby of the New York Times tempered praise with dismissive remarks: “At his worst, [Losey] reveals a total lack of humor put in the service of pretentiousness.”) This restoration of “Mr. Klein” is a modest revelation, with the precise trappings of everyday life, of privilege, of police stations, etching the paranoia of a man accused of being a man who bears the same name, who is also a Jew. Faceless oppressors reside behind the quotidian. Franco Solinas’ script, built on mistaken identity and doubling and scapegoating, is superb, complex scaffolding, but it’s Losey’s atmospheric insistence that haunts, stylized in every aspect, such as the plush lighting outside and in by Gerry Fisher and the production design by Alexandre Trauner. (Losey identified the film as “a fable acting as a warning.”) Delon’s sculpted face and large eyes and slight smile are a mask within urban settings and against the landscape of the mass round-ups by the Germans. 4K digital restoration. Opens Friday, April 1 at the Film Center.

The invaluable, long-running Asian American Showcase, presented in partnership with the Foundation for Asian American Independent Media, returns to the Film Center with new features, nonfiction films, and shorts from emerging voices in independent filmmaking, as well as films from the past two years, running April 1-13. Details here.

n+1 magazine features an extended essay, “How Hollywood Killed Celluloid,” by Will Tavlin, which provides a useful history of many of the events since the late 1990s that brought the film industry and its esthetic standards where they are today. A taste: “Blockbusters comported well with the multiplex model. Movies like ‘Raiders of the Lost Ark,’ ‘Beverly Hills Cop’ and ‘Ghostbusters’ offered reactionary tales about the virtues of American firepower, lying cops, and deregulation bathed in the warm glow of family entertainment. Presented as an escape from politics, blockbusters delighted audiences and broke box office records. The projectionists who screened them found their hours scaled back and their jobs more difficult. At the largest multiplexes, projectionists were sometimes forced to monitor more than twenty screens at once. Projection quality suffered. Misaligned projectors, out-of-focus images, and deafening or muted sound levels became the multiplex norm. Interlocked film prints were rigged between walls, sometimes into lobbies and over popcorn machines, and were exposed to more harm. A single misaligned roller could engrave an emulsion scratch across an entire print. A misthreaded film could bunch up in the platter and melt.” Much more here.