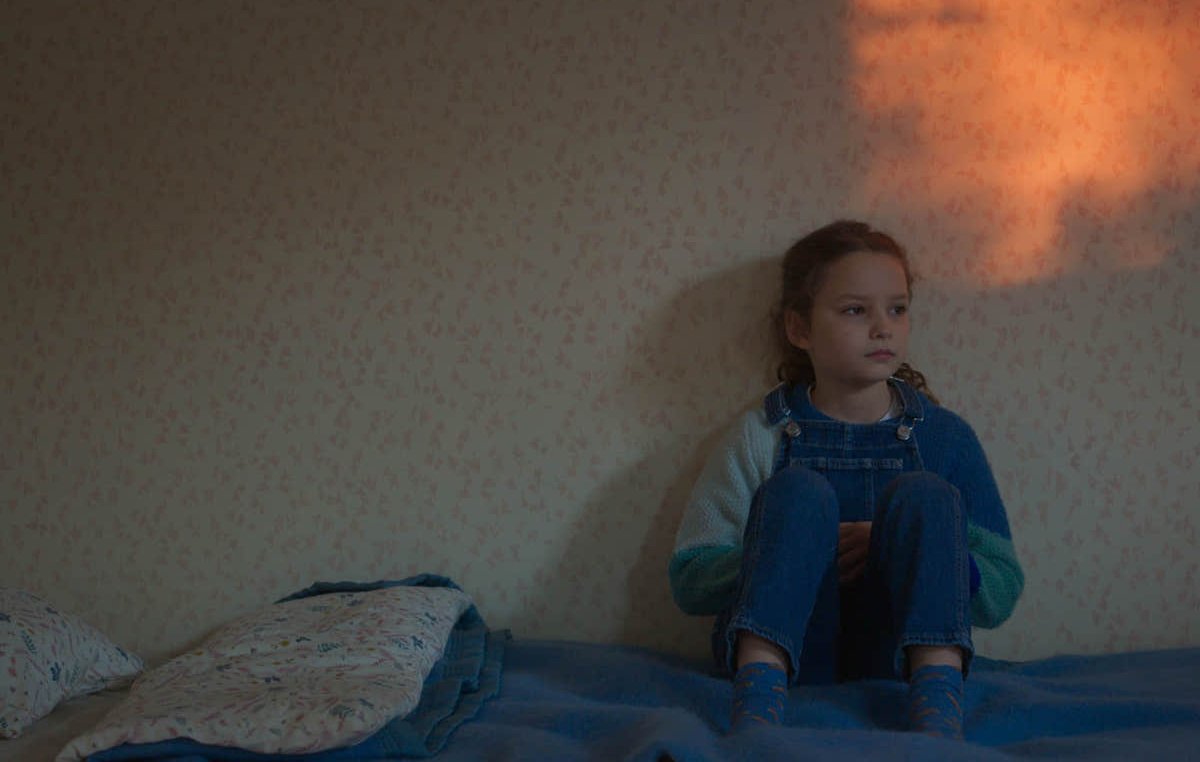 Two small girls share a haunted wood, beneath a canopy of greenery, a place of memories or just a moment in time? Or are they within a parallel moment, a moment out of time?

“Petite Maman,” the ravishing seventy-two-minute fairytale from French writer-director Céline Sciamma is gentle and essential in its refined storytelling; Sciamma works within quietude and with understated confidence. She gathers raptures of the ordinary.

Nelly, who is eight, has only just lost her grandmother and has yet to even realize what that means, let alone come to terms with the loss. She and her parents retreat to grandma’s house, which was also the childhood home of Nelly’s mother, Marion. The house is pastels and shadows, depths and shallows, cloud banks and jaguars. Mom had a hut and a treehouse as a kid and as she explores this patch of memory, Nelly makes the woods her own while her parents liquidate grandma’s things.

There is a magical close-up, close and simple and direct, of Nelly’s mother as she drives, seen in profile, with Nelly in the back seat. Nelly’s small hand reaches in to pop a treat into her mother’s mouth, another, another, then a sip from a straw from a drink. Marion keeps her large eyes on the road, but a smile overtakes her features, as Nelly’s small hand reaches around to her neck and her mother reaches up to hold it there. What’s happening here?

Everything. It is a poem; we are already in the command of a movie that is nothing less than a masterpiece. The universe trickles across fingertips in Sciamma’s exquisite miniature about time itself, blood, legacy, dreams. And meeting the imaginary friend who is as much you as yourself; as much as a girl and a girl’s mother. Can’t it be true? Won’t it be true?

Memories rise from childhood belongings, from drawings and notebooks with childish misspelling. Her mother takes leave for several days, overwhelmed, with Nelly in the care of her father. In the woods, Nelly meets a girl strangely like herself, who is building her own treehouse in the forest. The girl’s name is Marion. To embrace the fairytale character meeting of Nelly and Marion, they are played by twins, Joséphine Sanz and Gabrielle Sanz. That choice is part-and-parcel with all the small choices Sciamma makes, not a trick, but un truc: a brilliant thingamajig yet an elemental device.

“Mom, where is your hut?” Nelly asks in Grandma’s clean, recently renewed avocado-colored kitchen, all plain patches of pale green. “I went into the woods, too,” Marion murmurs to Nelly.

Her father pushes the kitchen cupboard out of the way, revealing another kind of patch. “They decorated around the cupboard, Marion, remember that?” Behind the long-still furniture is a backdrop that is a mottled sea-foam green amid greenery. The wallpaper rebukes the modern kitchen: it’s a scumbled impression of a glade that one could become lost in, and for a very long time. It’s a canvas, a dream, so subtle, just like the blank canvases in a scene at the beginning of “Portrait of A Lady On Fire” (2019).

Sciamma provides blanks, spaces that must soon be populated, but that have not yet been dreamt upon or within. At the overture of “Portrait of A Lady On Fire,” a young woman, soaked, alone, warms before a hearth. She sits in profile, knees upraised, nude, a painterly composition in which she and the fire share the center of the frame. She is flanked by two canvases, also damp from her journey across the sea to an isle of Brittany, arriving at this estate by dark, drying, too, before the warmth.

The drifts of negative space and interspersed grids contain possibility itself, the coiled human contemplating the task ahead. In other spaces, they suggest possibility, even hope.

In the wood with its slender, willowy trees, autumnal colors proud and bright in their passage, the wind picks up. Nelly explores a bit, then sits at the base of a tree within mama’s memory place. She practices toward a whistle, and child she is, fails and fails again.

“My childhood things, she kept them all,” mother Marion says, a stack of notebooks, mostly comp books on the floor beside a bed. “It depresses me,” she says.

Later, left on her own, Nelly in the hallway raps a flush bit of wall, which pops open a secret closet. (Instinct? Or had she seen her grandmother gaze within?) Her grandmother’s things, bits and bobs, are in bright boxes and tins.

The house is ordinary yet mysterious; solid, yet Sciamma’s delineation of space floats as grids and grounds, painterly abstraction. Shadows dawdle in corridors, across walls, across those marble-cover comp books of an earlier childhood. Ghosts linger even in the form of childhood scrawl and doodle.

How many sorts of shadow traverse any given house on any given day? Within the pastel and sunlight and shadow, Nelly is an imperturbable innocent, swaddled in immaculate sweaters and subtlest gradations of light; naturalism, sublimely heightened. Sciamma is also credited with costumes; Claire Mathon is the cinematographer.

Sciamma and Mathon shoot with familiar focal lengths, “ordinary” lenses, the perspective of human sight somewhere between the height of the girl and of an adult. So everything is “real,” that placement, that Western film grammar insists through a century of usage. Then, as Nelly and Marion play, bristling and bustling about the base of a tree, the camera is handheld, mobile, and the close-ups are less stopped breath than heartbeat: a lesson in camerawork, in shared gravity, in the most basic emotional display.

The mother returns to the child, apologetic at having been overcome with emotion. They sit on the floor of the empty space at dusk, and the last two words of the film… child, mother… are the child looking to the mother and venturing “Marion…” And Marion’s eyes hold the light we first saw on the drive into the woods: “Nelly.”

And at that moment, as the movie ends, outside my house: sheets and sheets of rain lash the air, horizontal, urgent.

“Petite Maman” opens Friday, May 6 at Siskel and at Landmark Century.