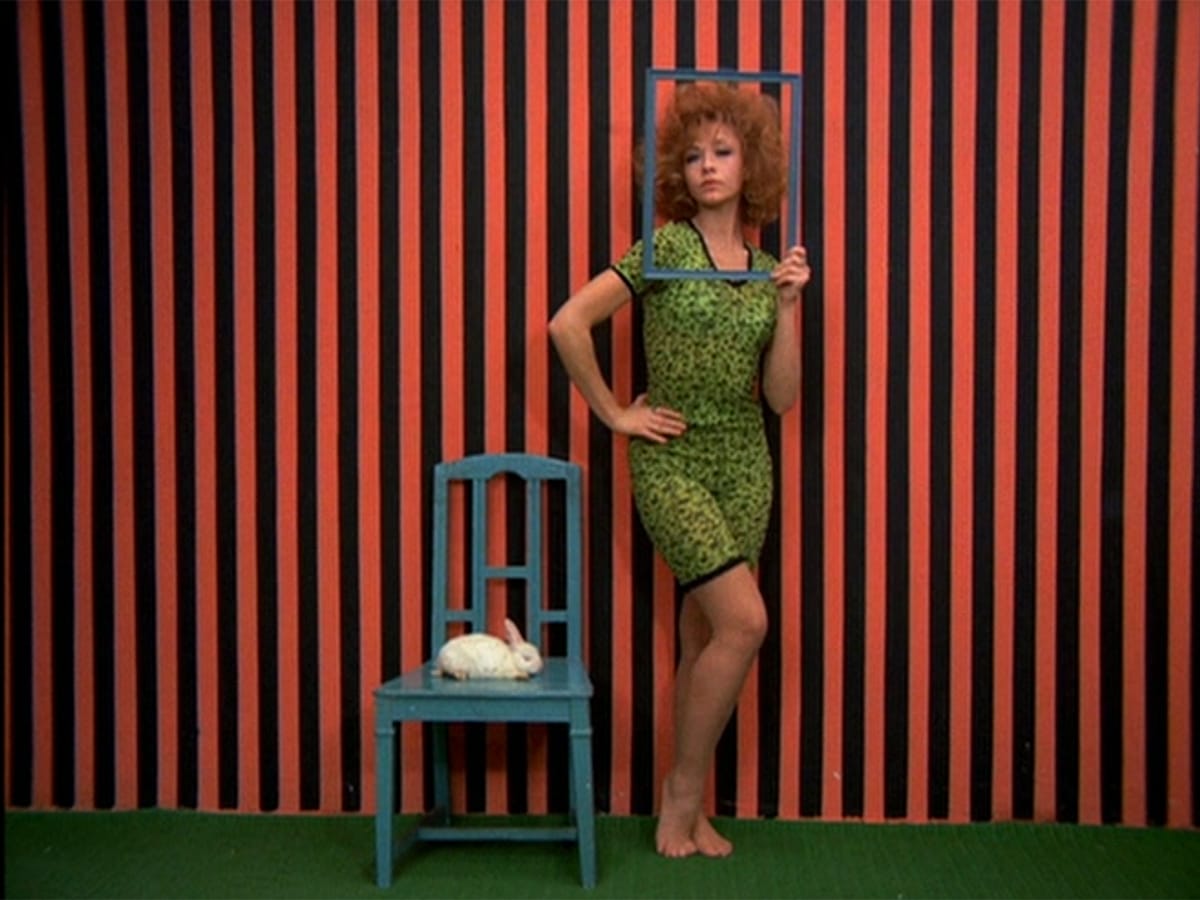 “WR: Mysteries of the Organism”

“Top Gun: Maverick” takes account of the fading of the light; Chicagoland Shorts, Vol. 8 plays at Siskel, May 26, 29 and 31, with seven shorts, from Alexander Fingrutd, Lily Freeston & Florence Creffield, Charles Fritschner, Aliya Haq, Charles A. Honeywood, Juan C. Linares, and Yanyi Xie; filmmakers appear after each showing. Opening in a season that’s in love with cartoons on the big screen, animated comedy-musical “The Bob’s Burgers Movie” finds the Belchers fearing the fate of their summer after a water main breaks in front of the house; a limited series again featuring Ewan McGregor as the young-er-ish “Obi-Wan Kenobi” hits Disney Plus.

“Downton Abbey: A New Era” hand-stitches another hit; Panah Panahi’s elegiac debut feature, “Hit The Road” is at the Music Box, and S. S. Rajamouli’s Telugu-language big-screen mega-actioner “RRR” surfaces at Siskel on Wednesday, June 1 for a single showing during the nationwide release of the hit film (orchestrated by one of the key distributors that mapped the release strategy of last year’s arthouse hit, “Drive My Car.”)

Chicago Critics Film Festival’s audience proffers awards; Dick Wolf on the 198 hours of episodic television he’s making this season; remembering the Skokie native Kunio Hagio, who created the iconic one-sheet poster for “Raging Bull”; and Korean director Hong Sang-soo on what he discovered in art in Chicago while at the School of the Art Institute.

Slated as a Tony Scott film before that veteran director’s death a decade ago, in 2012, “Top Gun: Maverick” is a tooled and calibrated machine for mass reaction, from a hundred people in a darkened room to millions worldwide. But the entertainment on screen, while a story of flyers and death-dealing jet aircraft, is a melancholy affair, as the characters and actors indicate they know the end is coming. (As did Scott.) Yet the themes and tics of the urgently charismatic Cruise’s body of work (and cocky body) are ever-present, as are those fathers and father figures and mentors and protégés disappointing one another. (Our extended review is here.) In theaters in a variety of formats, opening Thursday, May 26 in most locations. 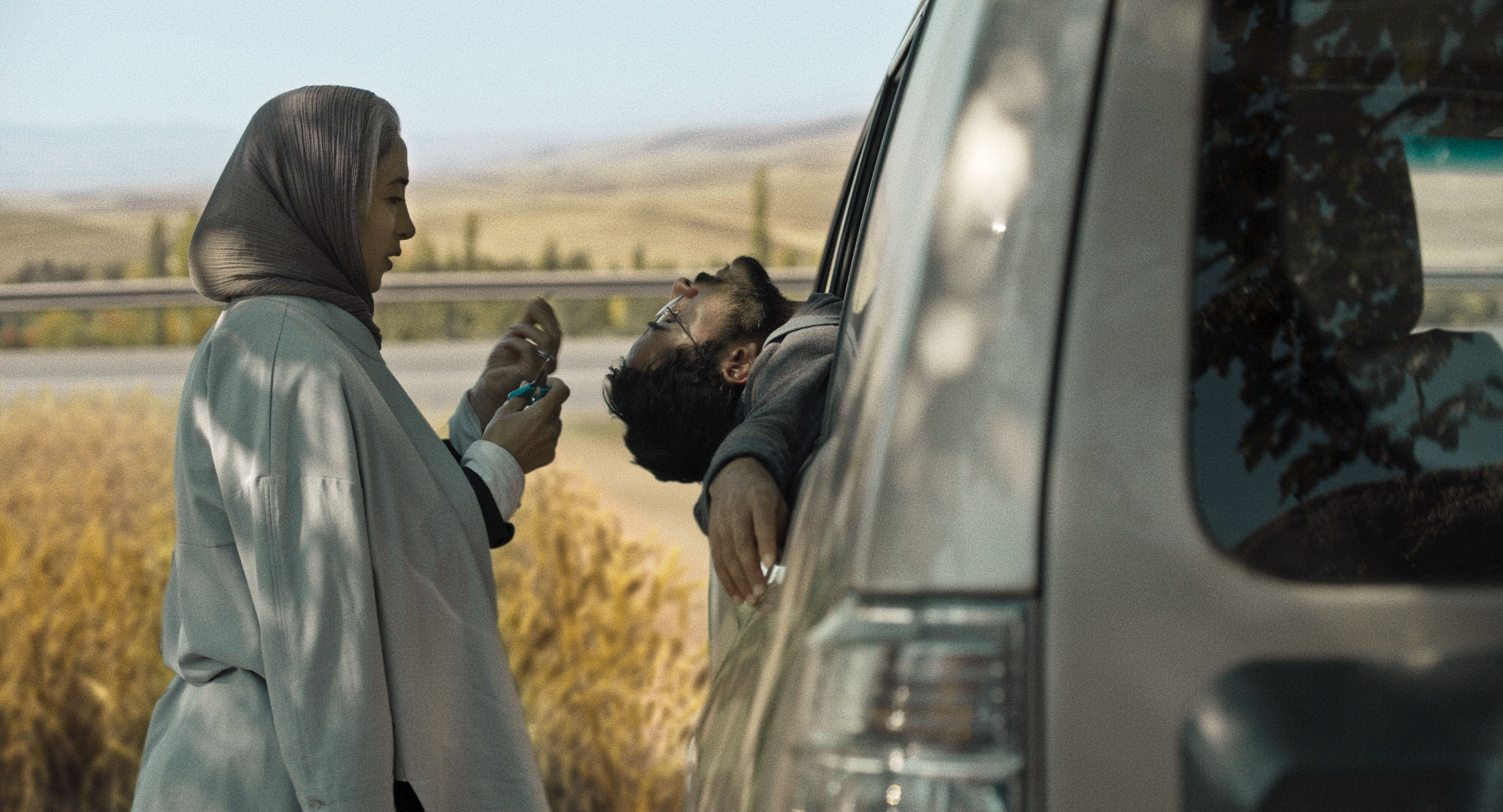 Iranian culture is having a bad month, with yet another round of arrests of the current generation of filmmakers in the Islamic Republic of Iran. Visible in the United States is Panah Panahi’s lyrical debut “Hit The Road.” There are layers and layers of heartbreak and bursts of generous gallows humor in the deceptively simple story, ravishingly photographed, of a family taking to the road. Pretty much every moment is compelling, revealing, and often sheer joy. Is it the journey or is it the destination? Is a car only a car or can it be a country, entire? “Hit The Road” is a supremely confident debut, and it may indeed be a great one. (Panahi is the son of filmmaker Jafar Panahi, who is still under a twenty-year ban against filmmaking, which he has circumvented with multiple auspicious features since.) Opens at the Music Box, Friday, May 27.

“Downton Abbey: A New Era” brought out a restrained stampede of older crowds, as predicted: the opening weekend take of $16 million is one of the highest grosses for a picture directed toward an older population since the advent of the pandemic, and a pandemic-era high for Focus Features. In theaters. 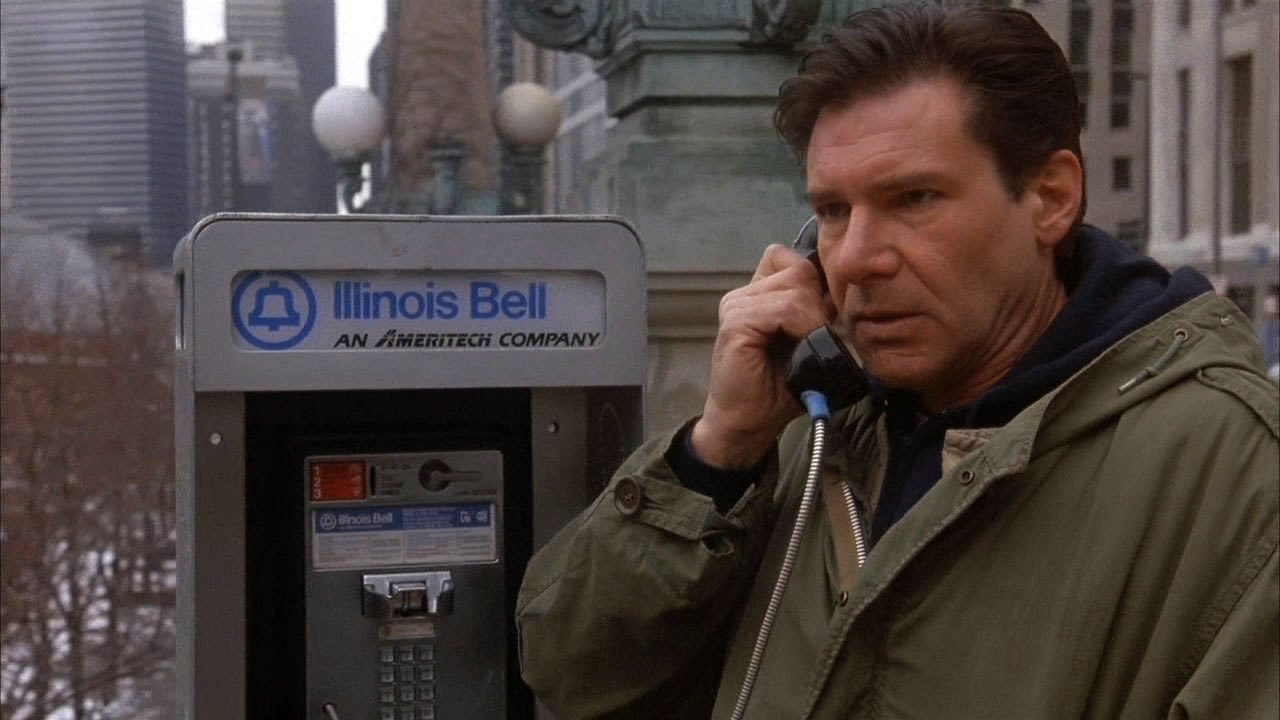 Harrison Ford in “The Fugitive”

Andrew Davis’ troubled-in-production but proud in release Chicago-set “The Fugitive” (1993) is showing at Siskel in 35mm as part of the yearlong “50/50” series. While he was still directing, Davis was one of the last great practitioners of spatial integrity. In a movie like “The Fugitive,” or in the long, intricate chase through the Chicago Loop streets and alleyways in the Steven Seagal vehicle, “Above the Law” (1988) or in how Chicago is made to resemble a dozen cities in “The Package” (1989), Davis shows how the human form, vehicles and the motion picture camera can move through space. Siskel, Monday, May 30.

The Siskel christens its June “Control.Alt.Delete” series with “The Matrix” in 35mm. Also in 35mm among June’s coming attractions in the series: “A.I.: Artificial Intelligence,” “Her,” “Alphaville,” and “Blade Runner: The Final Cut” in 4K digital, plus “Computer Chess.” Siskel, Thursday, June 2.

Facets presents Serbian filmmaker Dušan Makavejev’s “WR: Mysteries of the Organism” (1969) as one of “Milos’ Picks” during its anniversary celebration. The still at the top of this page, featured on the cover of the 1974 edition of Amos Vogel’s “Film As A Subversive Art,” confounded and beguiled ranks of film schoolers for years, along with the text and 300 other stills within. The barefoot rabbit lady in the picture frame! Ah, yes! Synopsizes Facets, “What does the energy harnessed through orgasm have to do with the state of communist Yugoslavia circa 1971? Only counterculture filmmaker extraordinaire Dušan Makavejev has the answers (or the questions). His surreal documentary-fiction collision ‘WR: Mysteries of the Organism’ begins as an investigation into the life and work of controversial psychologist and philosopher Wilhelm Reich and then explodes into a freeform narrative of a beautiful young Slavic girl’s sexual liberation. Banned upon its release in the director’s homeland, the arthouse smash ‘WR’ is both whimsical and bold in its blending of politics and sexuality. FACETS and founder Milos Stehlik had a long history with Makavejev. Milos and Makavejev were close personal friends, bound by their shared fiercely independent, if not anarchic spirit and desire to challenge traditional notions of filmmaking.” (Makavejev’s movies are rightfully highly regarded for their ragtag, freewheeling energy and gleeful subversion, but his greatest contribution to cinema may well be his work as an educator, at Harvard, Columbia and other academic redoubts, which encouraged generations of students to become the innovative filmmakers of today.) Facets, Friday, May 27. 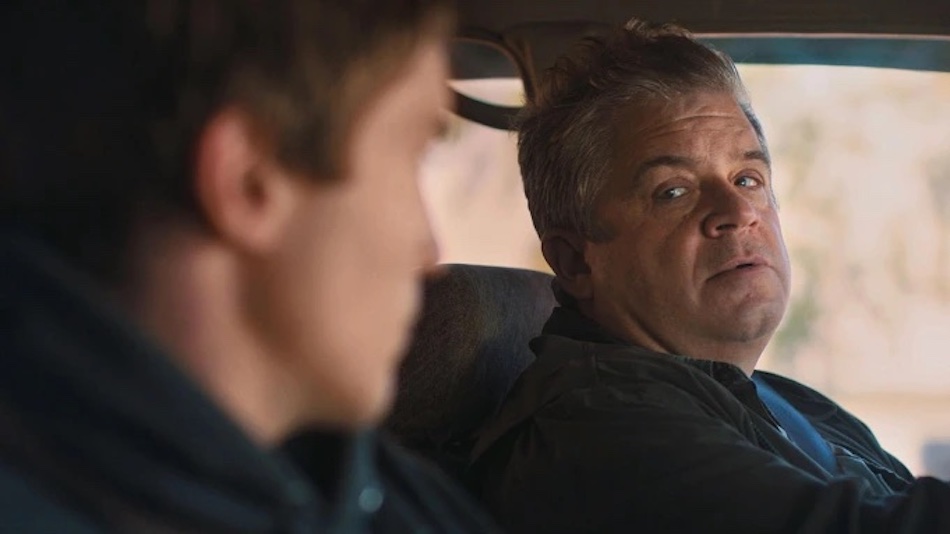 “One Chicago” mega-mogul Dick Wolf is profiled at Variety by Cynthia Littleton and he talks about the 198 hours of television he’s producing this season. “Wolf Entertainment’s production feat has come into sharper focus now that there’s a season’s worth of ratings data to peruse. Indeed, while no one in Hollywood was paying attention, Wolf quietly reshaped the network television business to his own liking… He took advantage of an industry in transition to bulldoze past obstacles to creating the linear TV version of both a binge-watch and an intricate narrative metaverse. Universal Television-based Wolf Entertainment has filled three nights of primetime across two networks with blocs of scripted dramas from the ‘Law & Order,’ ‘One Chicago’ and ‘FBI’ constellations.” Much more here.

In one of her characteristic keen deadline obituaries, the Sun-Times’ Maureen O’Donnell writes about one of the masterpieces of movie poster design. “Kunio Hagio’s poster art for ‘Raging Bull’ smolders with a ferocity that could make a boxer facing such an opponent want to flee the ring. Using oil paint, pencils and an airbrush, he created a sweat-drenched, bruised, hyper-realistic portrait of Robert De Niro as boxer Jake LaMotta that conveys a battered pugilist stalking his prey.” The Skokie native moved to Arizona years ago. “He thought the warm weather improved the flexibility of his right hand, his drawing hand, which he’d injured in his youth when a window at school slammed down on his ring and middle fingers.”

I haven’t got a take on the slim, charming elders-take-to-space “Night Sky,” merely wonder why it’s so freaking long and why J. K. Simmons and Sissy Spacek are almost limitlessly charming. Laundry-folding fodder at its finest. 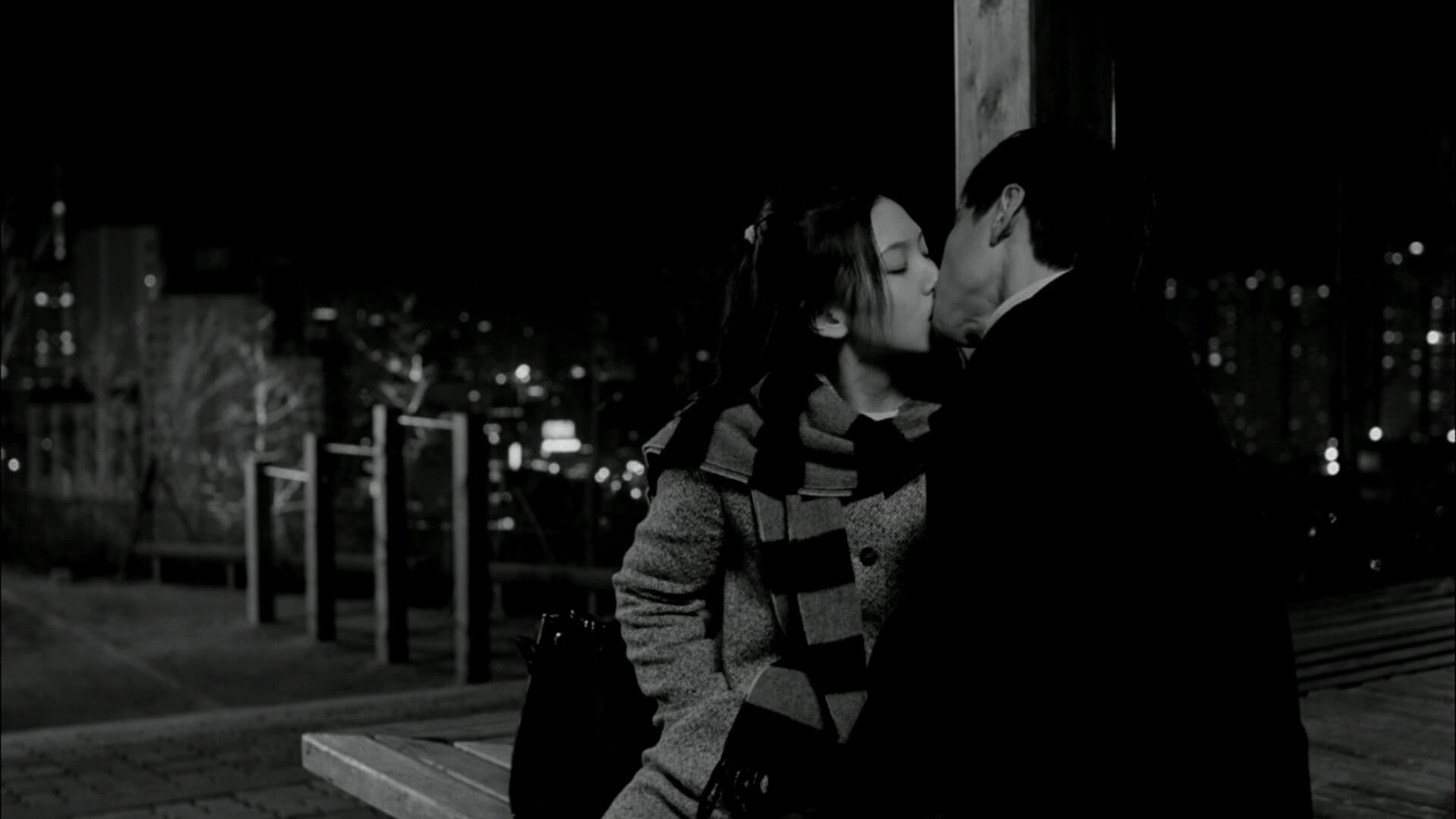 It was in Chicago that you had your encounter with Cézanne and his apple paintings, which you’ve described as a kind of lightning-bolt moment. I’m grateful for the place, because that’s where I met Cézanne, who, for me, was the greatest. I saw this apple painting [“The Plate of Apples”] for the first time in an art museum. I was a student, so I had a free pass. I was standing there talking to myself, like, “This is enough. I don’t need anything more. It still is the greatest.” I didn’t analyze it, but, naturally, I ask myself: why? Maybe his way of proportionalizing the abstract and the concrete is just right for me.

I like that you identify this as the defining quality, because I find it in your work, this balance between the concrete and the abstract. Are there filmmakers who you feel achieve that? I don’t think I found this similar line of division or proportion. I have a number of directors whom I really love, but they are different.

In a way, Bresson’s films also have something quite material and quite intangible. I could give a long talk about Bresson, Jean Renoir, Rohmer, even John Ford. Luis Buñuel, I like him very much. I cannot generalize. There are directors I just love, and that has never changed. Life, phenomena, whatever—it’s always a billion times more complex and mysterious than anything we come up with in a logical sentence. It’s impossible to be sure what is going on… I’ve never been consistent. All my life, people said I should be consistent. Who said that being consistent is good? I don’t think it’s good, nor is it possible.