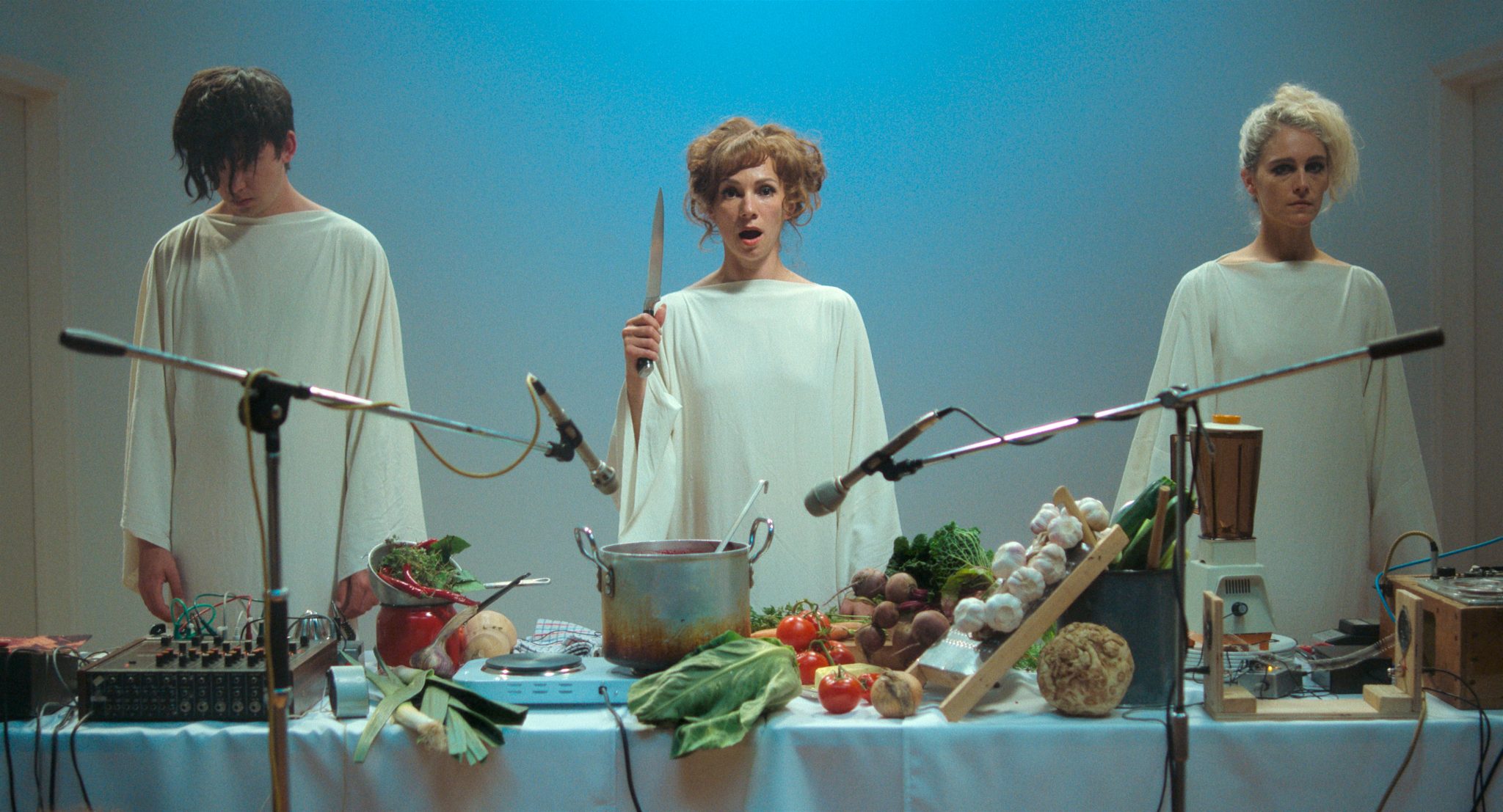 Like every other one of Peter Strickland’s dearly detailed, intimate pastiches, “Flux Gourmet” is a study in control where subjects who insist upon control spin again and again into petulance, then modest madness and ultimately, chaos.

As in Strickland’s past decade of movies—”Berberian Sound Studio” (2012), “The Duke of Burgundy” (2014) and “In Fabric” (2018)—remains a furious pasticheur and a dedicated fetishist. The films smell wholly original but you can also parse as events progress increasingly apparent influences, which Strickland swallows whole then refashions in alluring or alarming fashion. (In talking about his movies, he’s hardly reticent to boast of his wide-ranging cinephilia.)

“The Duke of Burgundy,” for instance, is a keen pastiche of 1970s Euro-sleaze and high art from an obvious admirer, a soft-focus exploration of a nearly chaste lesbian relationship heavy on psychological control (featuring a pesky mosquito). That film’s influences aren’t limited to the softcore 1970s movies of Radley Metzger and Just Jaeckin; the catalog of master of melodrama Douglas Sirk; the transgressions of Jesus Franco; Losey’s “The Servant”; Buñuel’s “Belle de Jour”; and certainly a raft of Fassbinder, including “Martha,” “Fox and His Friends” and “The Bitter Tears of Petra von Kant.” The result has a tang all its own: calmly florid, precise yet bonkers, bristling with detail.

Strickland’s up to the same genial games with “Flux Gourmet.” The filmmakers’ logline is as much wind-up as anything else about the project, set at the remote “Sonic Catering Institute”: “At an institute devoted to culinary and alimentary performance, a collective finds themselves embroiled in power struggles, artistic vendettas and gastrointestinal disorders.” (A character rues a world laid waste by “feckless faux-provocateurs.”)

My first impulse was to look for stains of Peter Greenaway’s gaudy, morbid, murderous, coprophagic 1989 “The Cook, The Thief, His Wife & Her Lover”; bits of the movie suggest the dour, often inscrutable Greenaway, with a dry but not obscure wit. Also discernibly, there’s a reduction of the Greek Weird Wave of contemporary filmmakers like Yorgos Lanthimos (“Dogtooth,” “The Lobster”), not only in the screenplay’s deadpan pile-up of oddities and eccentricities, but in the choice of a “hack” journalist (or “dossierge”) who chronicles the residency being a Greek named Stones (Makis Papadimitriou) who narrates the goings-on both on the estate and inside his belly in mellifluous Athenian Greek. 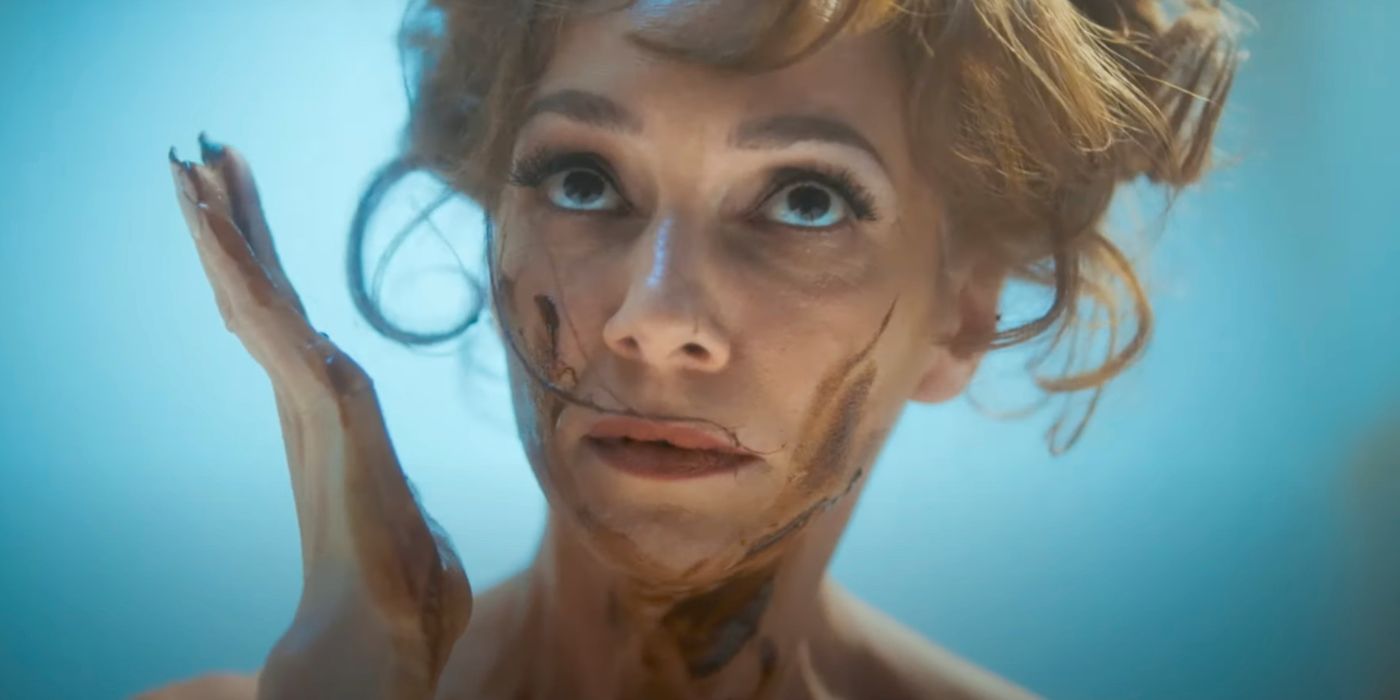 Knobs are twiddled, literally and figuratively: The mistress of the mansion, Jan Stevens (“Game of Thrones”‘ Gwendoline Christie) is perturbed by the first, run-through performance by the crew and finally admits, “It’s your use of a flanger that I want to discuss.” The most headstrong of the group says she doesn’t even know what a “flanger” is, to which Stevens replies, “It’s an electronic device that mixes two signals in a phase shift.” She pauses. “When you alter a sound that much, you lose all connection to the activity.” A longer pause. “I’m just trying to respect your vision!”

And within those peculiar worlds, he delves deeper into our own. “Whilst exploring the month-long residency of an art collective that deals with food, I became interested in the idea of taboo and shock value in art, which in this context opened up the dark side of the stomach and the bowels,” he says in a director’s statement. “I’ve often felt frustrated with cinema’s ignorance of allergies and intolerances, which are often portrayed as comedy, particularly when someone’s face swells up from anaphylactic shock.” Part of Strickland’s strategy is to have most of the fearful elements contained only in Stones’ narration: there are degrees of splatter on-screen, starting with a red sauce, but the worst takes place in the viewer’s mind.

Strickland told me in 2014, “I’m not trying to make it realistic at all. I’m taking tropes that have been used so many times and become wooden, and my aim is to humanize them. Not make it realistic, but still pay debt to films that are very fantastical, which is very cinematic to me.” Still, Strickland roots his ample whimsies in the personal: between his twentieth-century shorts-making and his twenty-first century feature production, he toured with his own musical group, making “culinary soundscapes,” a band known as… the Sonic Catering Band. (“And what  made you want to be a sonic caterer?” Asks deadpan Stones; rapidly replies flop-haired teen member Billy Rubin, “D’nno.”)

Lovely music is key to Strickland’s spell, leavening the industrial sounds—Hello, Throbbing Gristle; oh, there you are, Fluxus—provided by Jeremy Barnes and Heather Trost; Roj; Stereolab’s Tim Gane with synth master Holger Zapf; and tastes of Nurse With Wound and Gene Pitney.