“Elvis” is a lot like Baz Luhrmann’s ill-fated “Australia” (2008); big-canvas bravura and bluster and braggadocio in the form of cultural statement that feels like a sliver of a much longer work crying out for further months of judicious shaping. “Elvis” is big, but writer-producer-director Baz Luhrmann says this 159-minute edition is but a gloss on a four-hour version that dips beneath the phantasmagoria. “Elvis” is a life of the singer in the form of a portrait of an outsider, a crack at a personality behind layers and layers of feral, restless syncopation and who feeling empty to the end of his days, ever shoulders the mantel of persona and performance.

Baz’s Elvis is a burgeoning enigma, as is the fat-suit-encased charlatan-cum-Mephistopheles played by Tom Hanks, Presley’s lifelong manager, Colonel Tom Parker. There’s zing and song in the first gaudy, candied, emphatic hour, before facts begin skittering across the surface of the movie like loose change, a Wiki opera. We’re not handed a biography, but a ragged pageant, rendered in an exquisite palette made marmalade by cinematographer Mandy Walker (“Mulan,” “Lantana,” “Australia”).

We know more about Elvis in “Elvis” not because of the script but because we know about Elvis. This second level of knowledge is to the advantage of Luhrmann’s emphatic, breathless style; beyond elements that make members of the audience nostalgic for some moment of their own lives, we fill in what we know, what we’ve heard, what we’ve felt, the rapid clip of material doesn’t require scads of backstory. You have only to ping the elemental: Twin died at birth; momma loved him very much and he loved her, too; drugs, man, drugs. (There’s a lot more telegraphese to the picture, including central passages and montages of Elvis engaging with Black musicians as a young man.)

But the physical, the aural, the musical: Luhrmann lovingly lavishes the talent of the amassed creative crew on refashioned songs; plentifully arrayed settings and costumes: and tiny, eclectic details, such as a selection of chickens dancing on hot plates that hardly register. The effect is like Coppola’s “One From The Heart” injected with narcotics, and it also partakes of the ironic plenitude within the 1950s pictorial style of Douglas Sirk (“Written On The Wind,” “Imitation of Life”).

My Granny Mae insisted to her dying day that one dusk a tour bus had driven down Highway 109 in Western Kentucky and my uncle, small and hardly tall, made the signal of pumping your arm that you make to tell drivers to sound their horns, and the driver had sounded his horn, and the sign read: “GRACELAND” and she turned her head and glimpsed the grinning driver and it was no one less than Elvis Aaron Presley. That’s my Elvis. Elvis is everybody’s Elvis, a vessel to fill with what quiet heartache you hold.

But this is Baz’s Elvis. His “Elvis” is a sorrowful dream of a man who remains a cipher, to the movie, and even to himself, even as his voice becomes universally known; a supplemental totem with artful musing on music. The decline of Elvis in the depiction of his final years takes on grave significance in its rapidity: he falls from the Dionysian ecstasy we’re shown of his last years of shows to the final moments (not shown) in the smallest room in Graceland. We see very little of that estate’s interiors, mixing the cramped camp of the multi-colored shag-carpeted rooms that remain on public view for $196 for the “Ultimate VIP Tour.” (One of the most touching punches is at the end, when a fan is holding a late edition of the Memphis Press-Scimitar, with headline: “A Lonely Life Ends On Elvis Presley Boulevard.”)

In some interviews, Luhrmann posits himself as akin to Elvis, forever an outsider amid the tumult of creation, coming, too, from a small town, as if they were two talented, but sometimes tasteless hillbillies driven to mythic heights. But he’s also like Tom Parker, the ringmaster, the barker, the “snowman” alluring the rubes. Some moments with Parker resound, as his first vistas of the inchoate asset. This is not a whiff, but a draught of the future. Of a girl in the crowd slain in the spiritual as she catches sight of this virile-seen-as-virulent trickster with a floppy forelock and kohl-rimed eyes in a flamingo suit who just cannot stand still, Parker murmurs in voiceover in his thick Dutch-cum-Bavarian accent, “I could see in her eyes he was something she wasn’t sure she should enjoy!” (Young Elvis invokes that word, too: “I”m no trickster!”) Telling, too, is his mother’s warning, “Do not trust your own goddamned cleverness.” 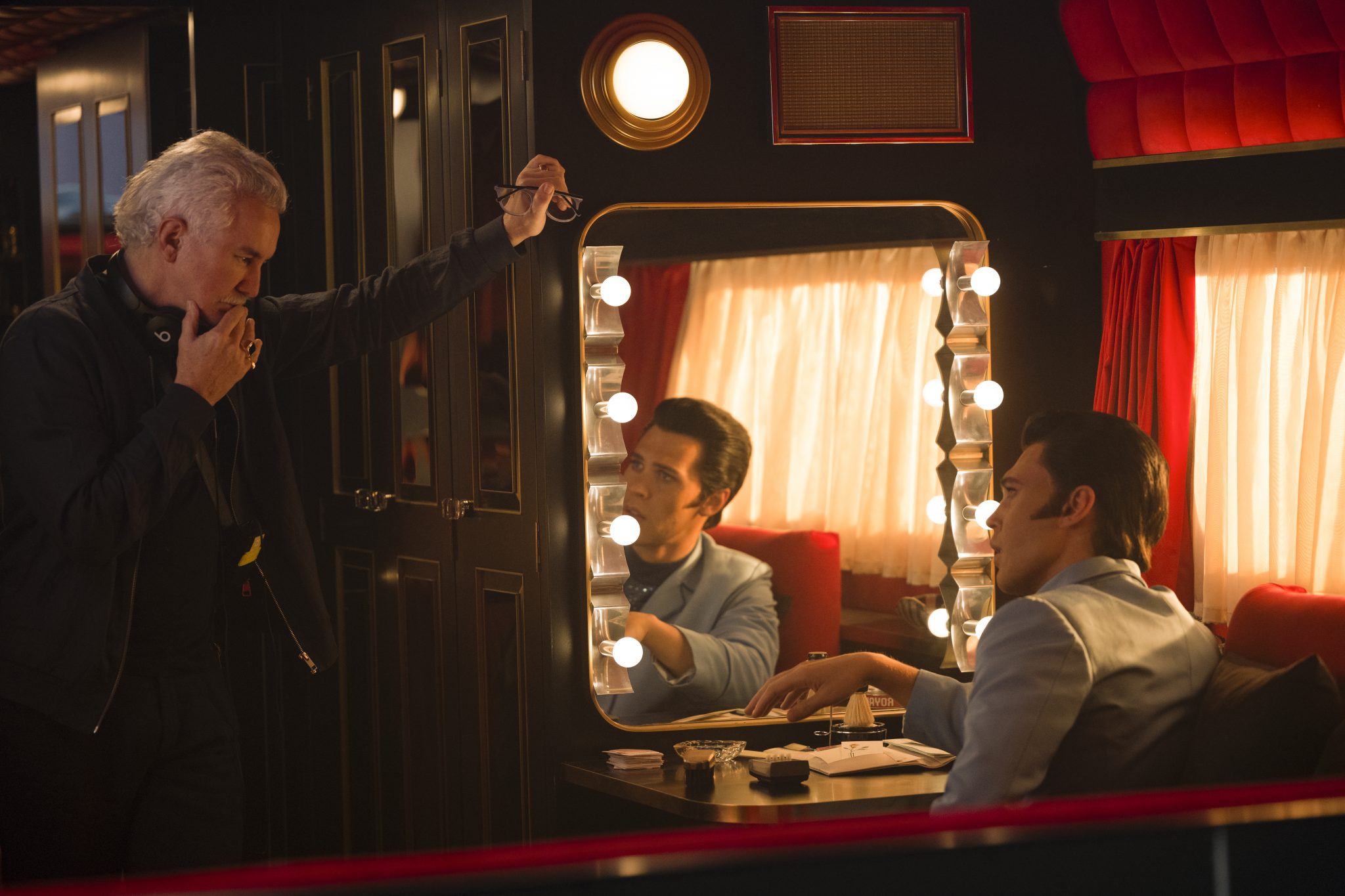 “I look at creativity as an adventure,” Baz Luhrmann told Australia’s The Saturday Paper. “When I set out to make a film, I ask, ‘What do I need to explore personally?’ Then the next question I answer is, ‘What can I put out there that’s going to be useful in this world right now?’ You can not like it, you can think it’s garbage, and I’m all right with that, you know? I don’t even use my personal taste.” He claims that personal taste is, in fact, an enemy of art. “My singular job is to work out how to take the message of this story or idea, the universal idea, and plug it into as many audience members as possible,” he says. “To unify an audience, to unify strangers sitting in a theater and for a few brief moments make them feel that they’re not alone, and that we’re all human. Now, that may sound lofty, but at a time in which so few people are going to the actual cinema, I feel that passion in an even greater way.” It’s the dance: love for music, love for audience, back-and-forth, back-and-forth.

“Elvis” is in theaters.