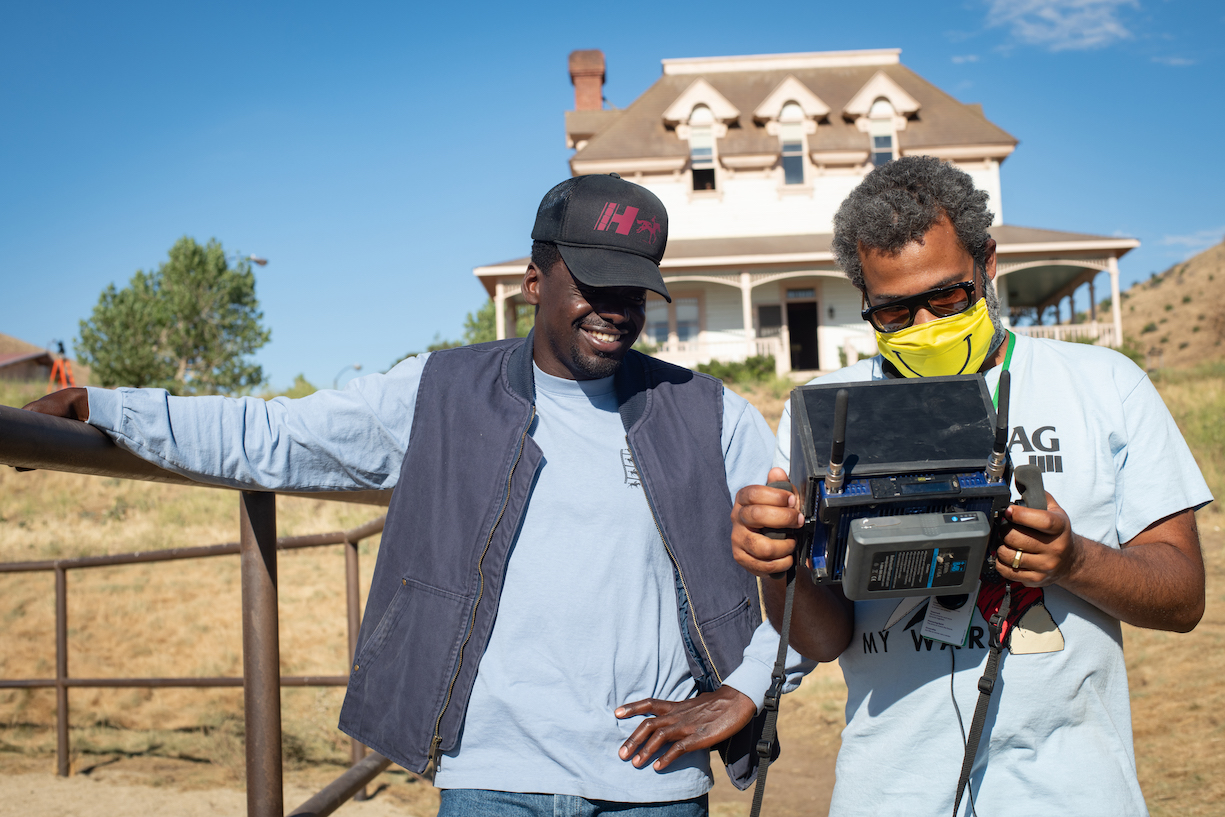 Jordan Peele’s self-described “horror epic” “Nope” was screened past our deadline. If the jam-packed, sun-bright, post-cowboy, UFO-nudging trailer is only a glimpse, as is the custom in promo of what’s in store… HOPE. What is that “NOPE” acronym going to stand for? (“Not Of Planet Earth,” it turns out.) Residents in a lonely gulch of inland California… bear witness to an uncanny and chilling discovery,” Universal Pictures advises, “As their efforts, and hubris, cross a point-of-no-return, ratcheting the stakes to terrifying consequences, our heroes are drawn straight into the eye of an irreversible storm. The result is an expansive horror-spectacle with an intimate and emotionally complex core.” Says Peele in the press kit, “I had this idea of making the Great American UFO movie—a flying-saucer horror film. And not only a flying saucer horror film, but really, the quintessential one. It’s a difficult genre and hard to pull off because it’s got this huge canvas that you have to take into account—the sky… Within that genre, though, we often apply all these wonderful qualities to some advanced alien civilization. But what if the truth is a lot simpler and darker than we even could ever imagine?”

At Facets, Full Spectrum Features presents “Free Yr Dick,” a program of contemporary queer work, including the local premiere of Chicago-made “Bros Before.” 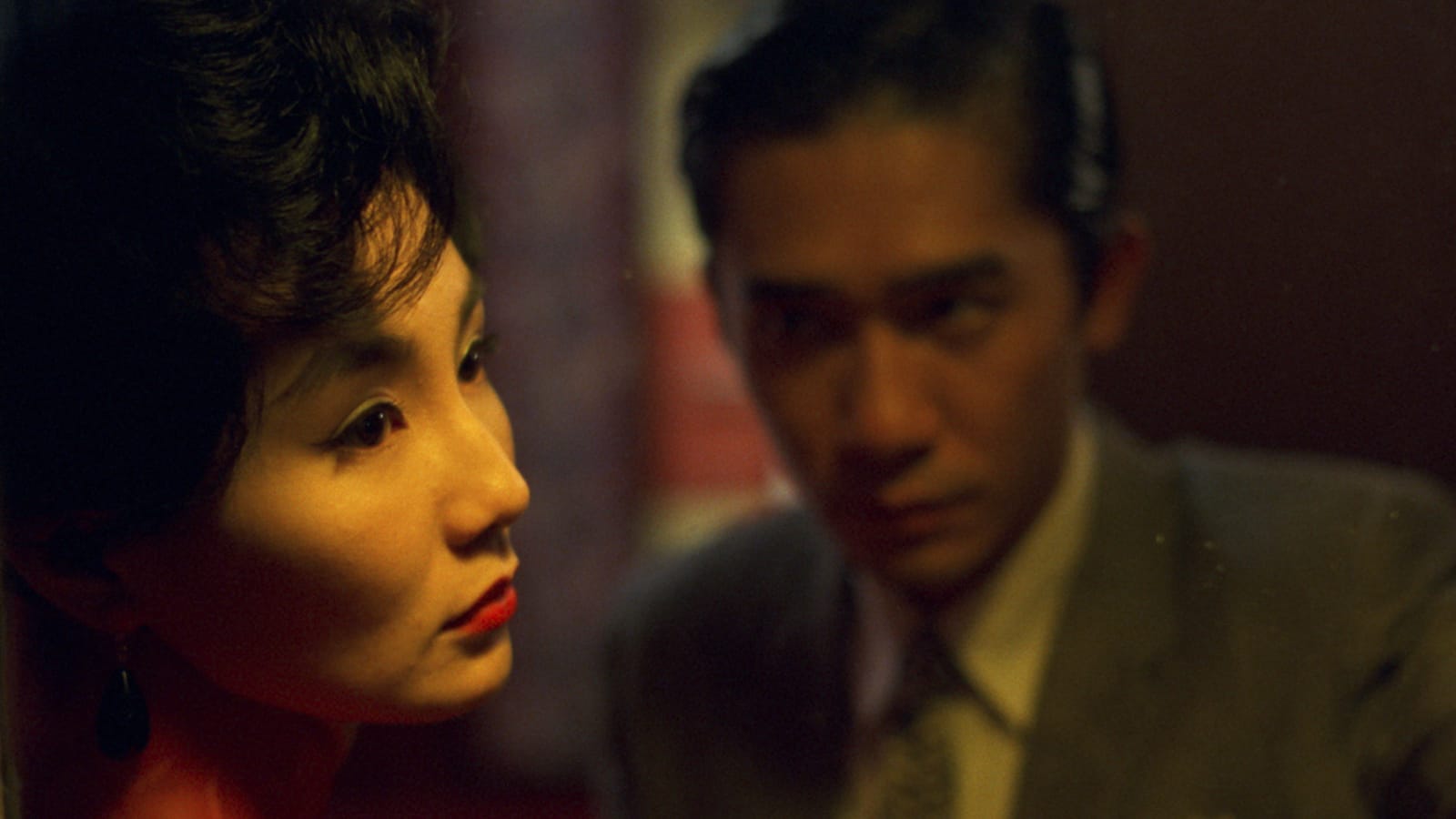 “In the Mood for Love”

Wong Kar-Wai’s “In the Mood for Love” is a haunting wisp of romantic shorthand, manners and longing. Its whispers land deep within the heart. Plus Chris Doyle cinematography. With William Chang costume design and production design. Set in early-1960s Hong Kong, it’s a smoldering eavesdrop on two neighbors, a man (Tony Leung) and a woman (Maggie Cheung) who discover that their respective mates (never seen) are having an affair. They grow closer. Wong is coy about how close—a romance may or may not occur. Do we worry? No. Leung and Cheung have silken presence, and the use of pop music, including a recurring Nat King Cole theme, makes for a swoony dream. Siskel says, “This presentation will be the new 35mm print struck in 2021, which is a digital film-out from the new 4K master.” Siskel, Monday, July 25. 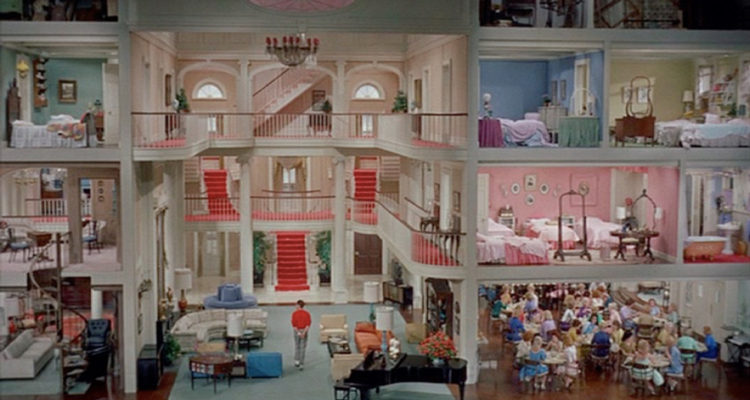 The cutaway set of Jerry Lewis’ “The Ladies Man”

The Chicago Film Society presents Jerry Lewis’ mad, masterful “The Ladies Man“ (1961) in a 35mm print from their own collection. Beyond the range of big laffs Lewis could readily rollick at that prolific stage of his career, there’s breathtaking Technicolor and Lewis’ mastery of the mobile camera. Behold vast ambition and also grace at his directorial command. The nerve of the man!

From Lewis’ recently reprinted “The Total FilmMaker,” indicating his innovations years, even decades, before becoming industry standards: “I’d always dreamed of a million-dollar set, and this one cost $900,000. ‘The Ladies Man’ was a one-set film, shot entirely in a four-story, open-faced building which stretched across two Paramount soundstages. It afforded me shots in and out of all the rooms, and to photograph it, I had a special boom extension built, possibly the largest ever constructed for a film. To fully utilize this unusual set, and get the production values back from $900,000, I built a half-inch scale model of the entire set, then did all preparations with the model. Camera movements were blocked out; reverses, dolly shots, boom shots. I moved the model walls to detail the work. It proved to be a lifesaver. It requires imagination more than a degree in architecture. I study issues of Better Homes and Gardens and other magazines to get ideas for sets… Every person involved in filmmaking has his own tastes and sometimes these personal preferences intrude on the story and on the director… You’d be surprised how often personal intrusions dictate sketches from art departments. Sometimes you wonder if you are both working on the same picture. For male wardrobe ideas I buy Esquire, for female wardrobe ideas I buy Vogue… Time spent in dentists’ waiting rooms can help young filmmakers more than hours of lectures in classrooms. Perhaps it’s impressive to walk around with Cahiers du Cinema or the Society of Motion Picture and Television Engineers’ journal under your arm, but you’ll get more practical knowledge from everyday periodicals.” Chicago Film Society, NEIU, Wednesday, July 27. 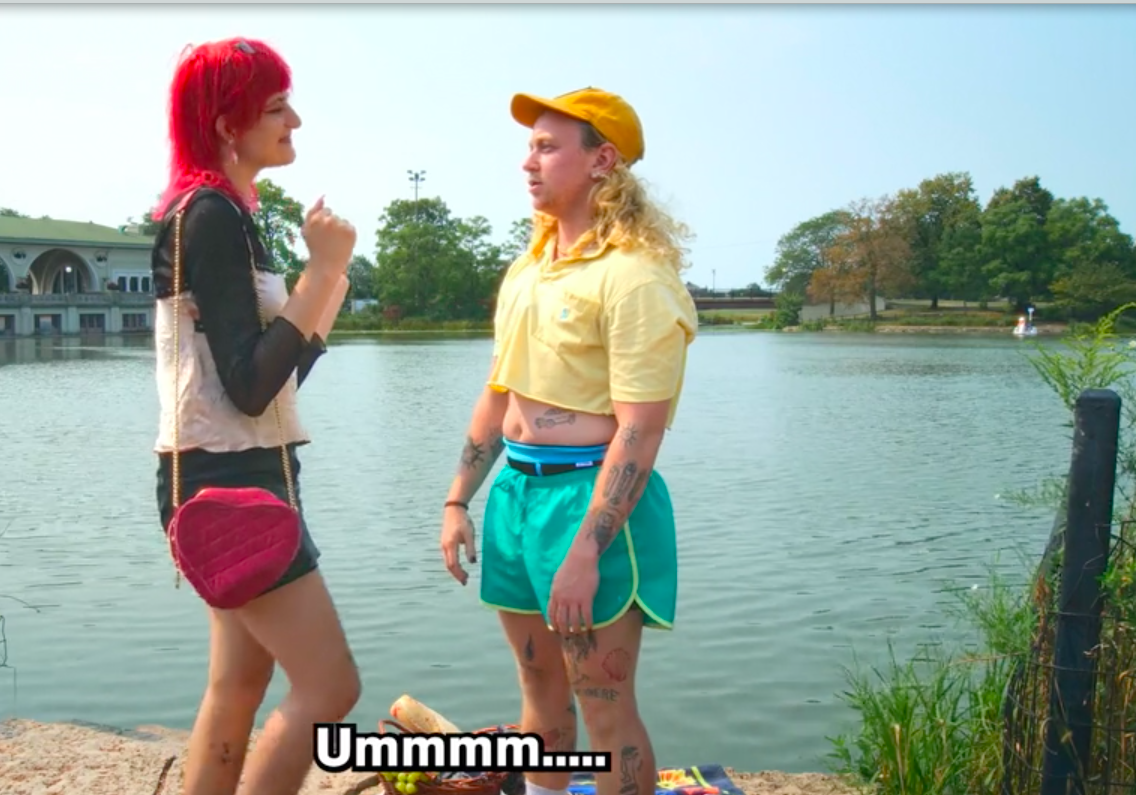 “Free Yr Dick” is a seventy-five-minute selection “from the contemporary queer underground” chosen by filmmaker Henry Hanson [2020 Newcity Film 50]. “These short films celebrate so-called deviant sexualities with humor and warmth,” relays Full Spectrum Features, which is co-presenting the program, shown with open captions, at Facets. Leading off the program is the “hometown premiere” of Hanson’s own “Bros Before,” a Gregg Araki-influenced short in which “Elijah and Billy are two trans bros who just happen to enjoy jerking off together—in a straight way! But when Billy starts dating a woman, Elijah must come to terms with his feelings for Billy and his own burgeoning homosexuality. Raunchy, campy and heartfelt, ‘Bros Before’ is a second puberty coming-of-age story saturated with sex, drugs, and hyperpop.” [NSFW trailer here.] Also on the bill: “Monogamy House,” Henry Hanson and Mitch Mitchell; “Spooky NY T4T,” “Splish Splash” and “2 Gurls 1 Jug,” Frances Arpaia; “Rose” by Lane Michael Stanley; from Germany, “Adorable,” Cheng-Hsu Chung; “Mes Chéris,” Ethan Folk and Ty Wardell and from Canada, “Don’t Text Ur Ex,” Jo Güstin. Facets, Saturday, July 23. 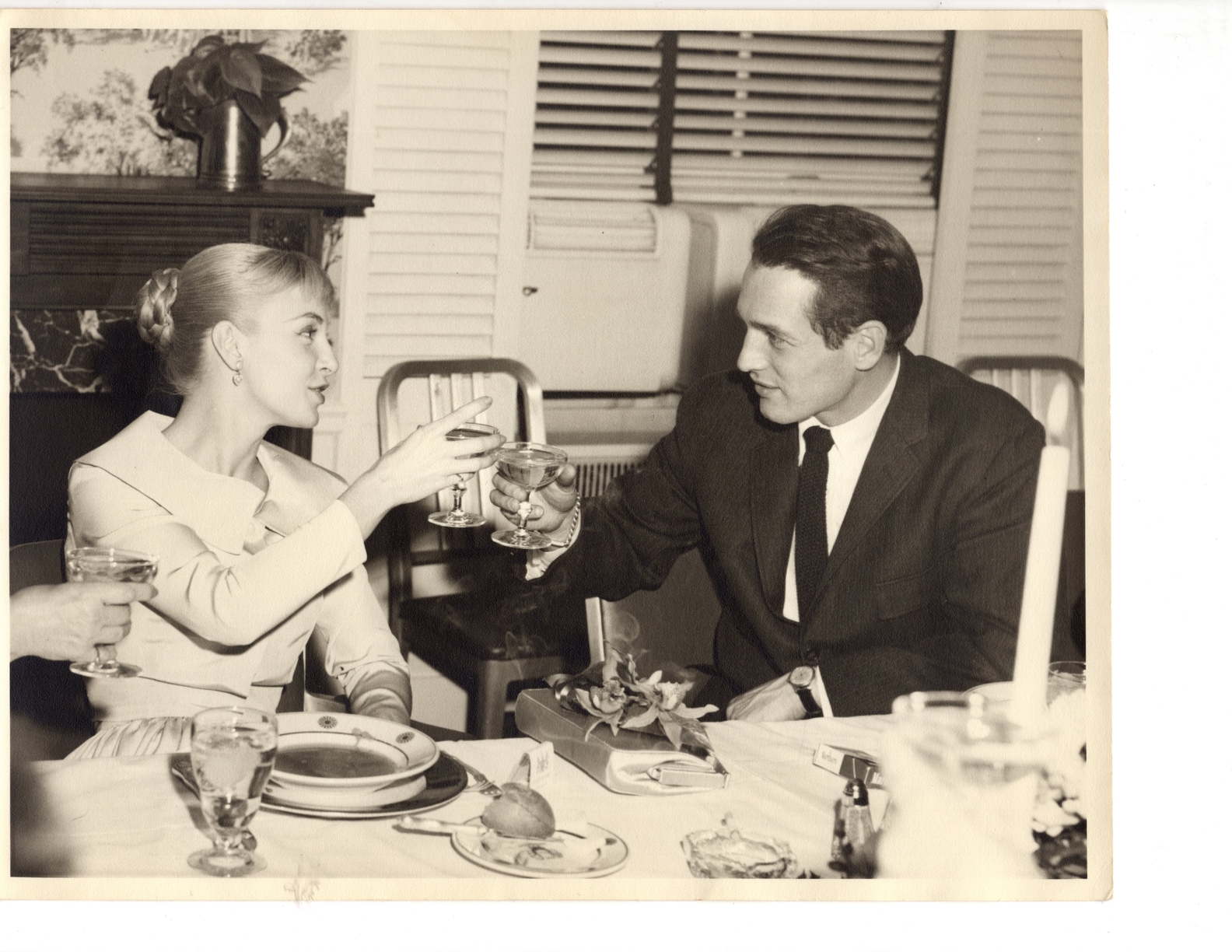 Ethan Hawke directs the six-part, six-hour contemplation of the shared careers and lives of Paul Newman and Joanne Woodward in “The Last Movie Stars.” The first hour is an auspicious start: the public faces of the performers and the lives behind the personas are of equal import. I’m saving the others for one-at-a-time watching; it seems the right tack for the leisurely, charming survey of these greats. “The Last Movie Stars” is streaming on HBO Max. 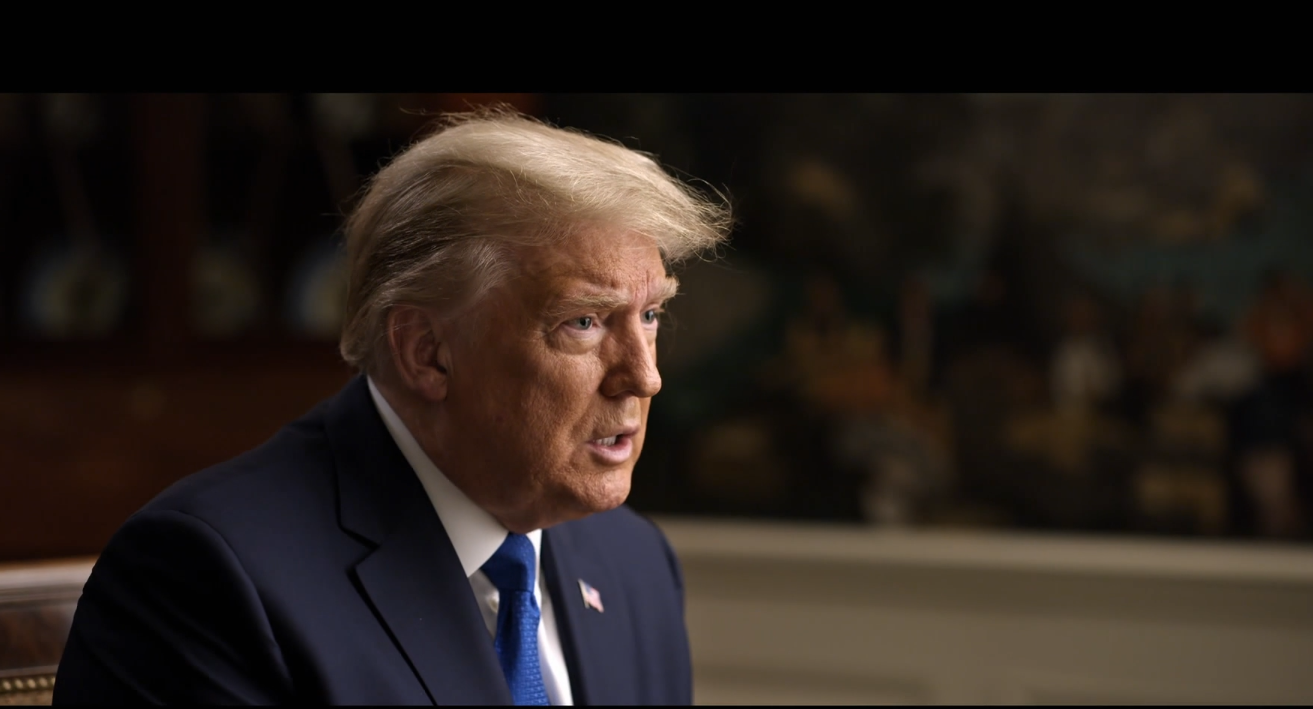 British filmmaker Alex Holder’s “Unprecedented” is a plain and unrevealing object benefiting, maybe, from access to the Trump clan in the months leading up to the failed attempted coup of January 6, and even during that day’s duration. But the visual attack! The style is all clangorous irony: lit and groomed in the fashion that makes figures look “historic,” makes the central subject look unworthy OF LIGHT ITSELF. Would you look at that hair! He is almost pitiable (but nope) under the meticulously sculpted light. The filmmaker is cruelly, genially polishing, polishing, his presentation. (Same with the progeny.) It’s blunt, may yet still be too subtle an effect. Maybe it’s not meant ironically?

The dream film lies, of course, in the sharded ragged iceberg beneath the pointy tip of this small spear, the sensorium of unedited interviews supplied by the filmmaker to “The U.S. House Select Committee To Investigate The January 6 Attack on the U.S. Capitol,” which has not indicated in advance what, if any, use it will make on the primetime presentation slated for July 21, and its reported indictment of the former president’s actions on that date. Streaming on Discovery Plus and under review by the January 6 committee.

Ted Hope still has hope for film on Twitter on a regular basis, even with thirty-five years in the business, over seventy movies, and past roles including several years as co-head of movies at Amazon Studios, “Can we build an entity that consistently and exclusively delivers the sort of mind-blowing, earth-shattering, long-lasting, soul-expanding work that is truly great cinema? Yes! But… How come so few try? I love that Netflix might have once seriously asked ‘Where does great cinema come from?’ but I would love it more if each studio & financier consistently tried to provide answers. It feels as if everyone. has forgotten about the goal of greatness. Let’s climb back on please.”