The flooding form that series took on with the advent of production for streaming and binge-watching isn’t being taken for granted by every creator. Writers and directors are looking for freedom to look at the world—and storytelling—and “content”—in expressive ways, from “Euphoria” to “The Bear” to the nonchalant brilliance of “Irma Vep.”

Olivier Assayas says his tender, funny, sneaky, emotional, playful eight-part, eight-hour comedy-drama on HBO Max, “Irma Vep,” patterned after the ten-hour serial by Louis Feuillade (from 1914) as well as his own 1996 take on filmmaking, folly and the serial of the same name, was a happy fluke, a bouncing, bountiful lockdown baby. He and his producers fell into a slot when no one else would spend HBO’s money. Nobody was making much of anything, shooting was tough, the risks genuine. The result, for me, is rare joy, and one of the best and most sustained things Assayas has crafted.

There’s so much detail to revel in, I want to just take a breath and consider its production, to vamp about its very existence. During early stages of the pandemic, Assayas was told he could wing it and make “Irma Vep” straightaway or wait a few years, all of which would result, as is common custom in the American system, in the thing never getting made.

The story hadn’t been plotted, let alone written. Assayas wrote a pilot and a series “bible” and the rush to production was on. The sixty-seven-year-old veteran French filmmaker speaks of his films as straitened by budgets and pressed for time throughout his career, even the ones that don’t seem like giddy sketchbooks or artfully shaped assemblages, such as pungent, style-laden, moody, broody features like “Demonlover.” The series, he says, was still run-and-gun, but with a budget much larger than he is used to. 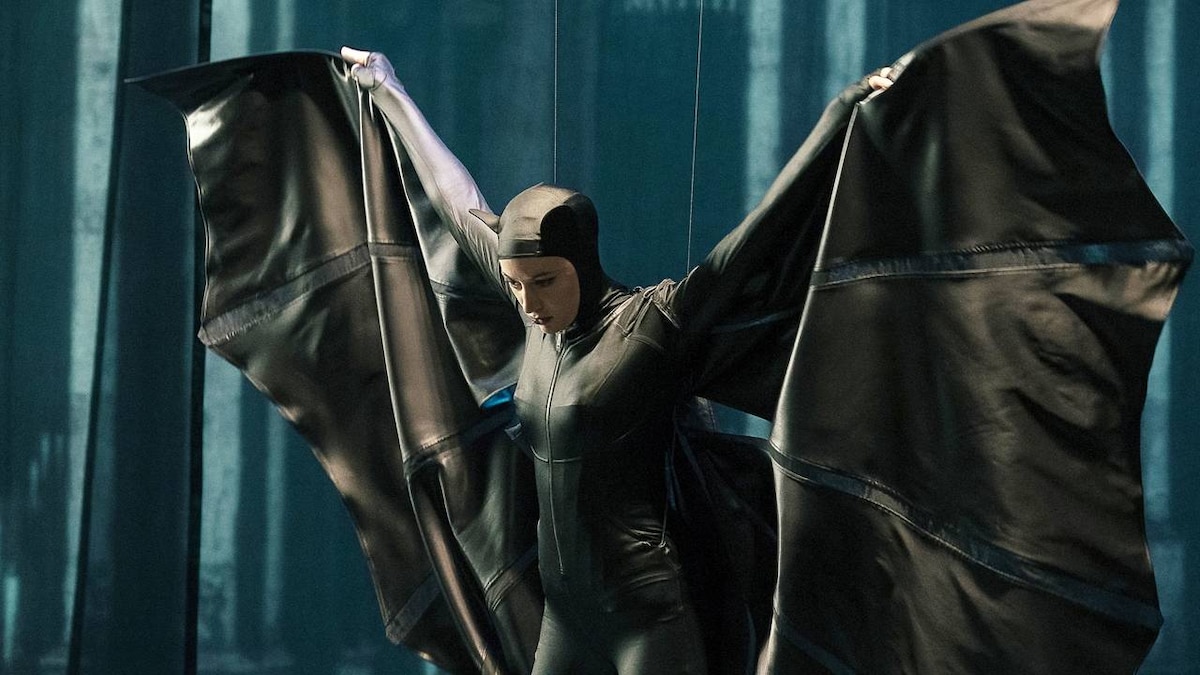 Producers populate the credits of each episode, and a good measure of the zing and ping of the series must come from their contributions, including “Euphoria”‘s Sam Levinson, and as “supervising producers,” playwrights Will Arbery (“Succession”) and Jeremy O. Harris (“Zola,” “Daddy,” “Slave Play”). Assayas shares executive producer credit with Vikander, Sam Levinson and nine others. “Based on the motion picture ‘Irma Vep’ by Olivier Assayas, created by Olivier Assayas, written and directed by Olivier Assayas.”

The casting is exceptional. Assayas mixes latter-day fashion faces and figures—Vikander as the bright attraction, Mira, even when in repose or wickedly hungover; model Devon Ross as her watchful, murmuring film-polymath assistant Regina; Sigrid Bouaziz as Séverine, one of Mira’s adversaries in the film-within-the-film as well as on-set—with luminaries from French cinema since the 1990s or so—Nathalie Richard, who played the randy costume designer of Assayas’ 1996 film; Hippolyte Girardot; Pascal Greggory, and Alex Descas, who was the charismatic lead in multiple movies by Claire Denis.

The entire cast is up for the naturalistic but elevated repartee. Serious people with their guard down, saying things like “They say things like the ghost of ‘Irma Vep’ has been haunting cinema ever since.” And Mira’s “You know I’m a better fuck than her, man”; Regina’s “Seeing it for the second, well, the third time, I thought it was kind of all right”; an addict actor observing, “I’ve eased up on a lot of things, I don’t want to wind up like my friend Harvey Weinstein,” who is a man who takes the train because “anything that flies has to be evil.” And of course, there is the marvelously focused yet wild director René Vidal (Jean-Pierre Léaud in the movie, Vincent Macaigne in the series), who resents scripts and schedules, like the silent directors faced with the industrial machine of the sound era, “My job is to screws [sic] the plan.” Assayas to Vanity Fair on the plan: “It was really exciting to dive into a genre that I had never really practiced. I had no idea what the rules were. I had no idea how I should approach it. I invented my own way of making a series, within the process of making the series.”

Assayas tells Vanity Fair, “The original ‘Irma Vep’ is like a Polaroid of my life at that time,” and at eight hours, this series is a lot of digital pictures, iPhones making work and taking selfies, and very much personal work by Olivier Assayas, heaped with lashings of film history, especially of films about films, not limited to Truffaut’s “Day For Night” and Fassbinder’s “Beware Of A Holy Whore.” And Vidal’s own, earlier “Irma Vep.” Assayas never met a meta-reference he can’t turn into a small joke and his characters talk and talk and listen and listen and their world is a stream of interpretations of conversations about interpretation. And the movie-making process provides an armature to hang much bad behavior, many good intentions and loving observations. 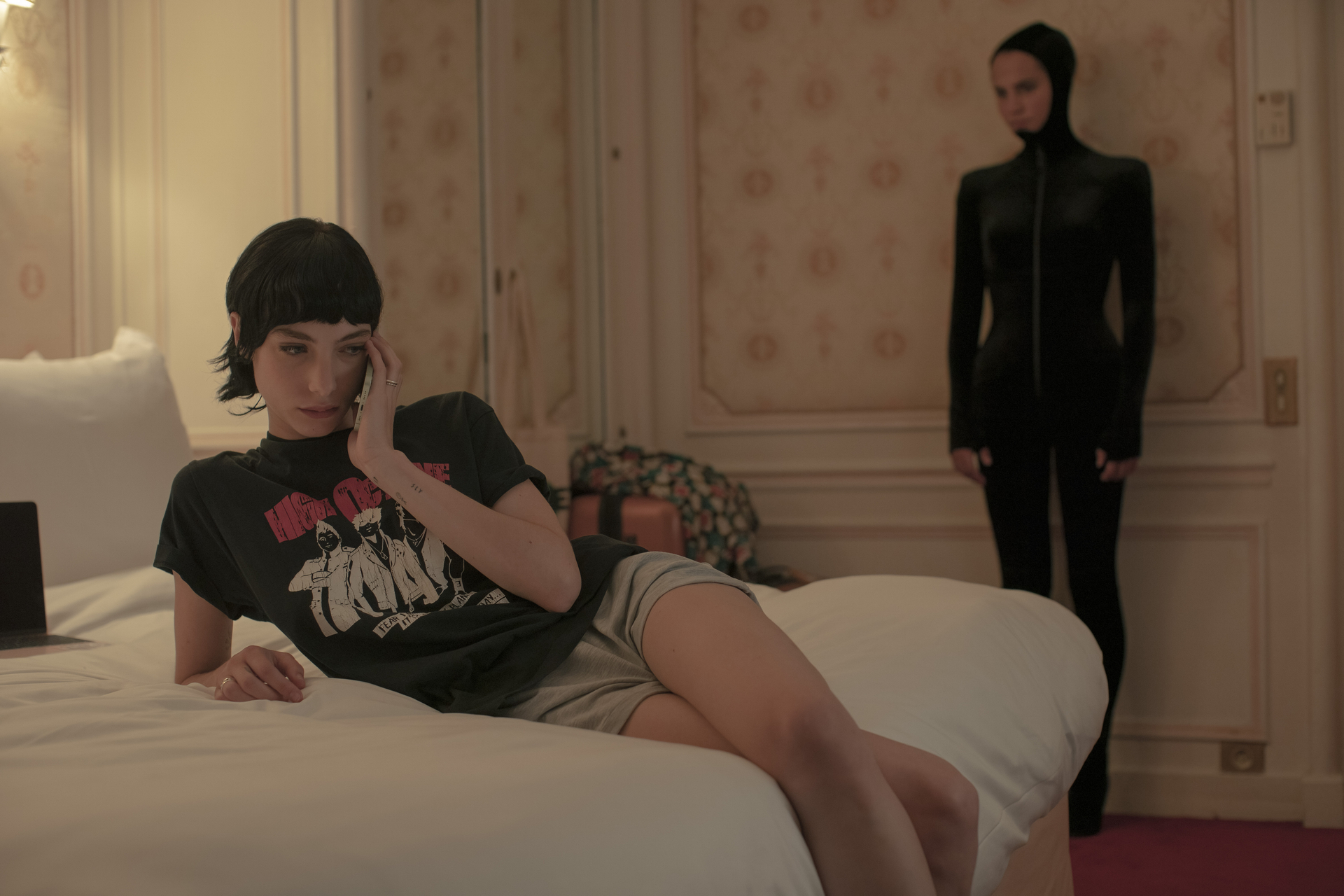 Each episode of “Irma Vep” deepens and darkens and teases and taunts even while trafficking in a neurotic self-deprecation: film history is the coin of conversation, but it also is about the public image and the private flirtations and sexual life of superstar actress Mira, played by the ever-magnetic Vikander, relaxed as a cat, slouching against the furniture as often as possible and affecting a warm and approachable American accent, as it is a series about vampires and thieves.

The series is also about the present moment of movies versus streaming, and in effect, about the means of its own production, the shiny surfaces of its own existence. “Streaming” and “content” and “cinema” are spoken aloud. “Chaos” is a watchword here, capturing in a word, this most personal and seductive and eccentric and conversational thing. “Whenever cinema is in chaos, you can do a new ‘Irma Vep,'” Assayas tells Filmmaker editor Scott Macaulay (whose company Forensic Films has been a co-producer of the director’s “Demonlover” and “Clean.”) “I felt pretty much that cinema was in the moment of chaos. There was a lot of soul searching, people trying to figure out what’s going on—what’s the cure and what exactly is the malady.”

“Irma Vep” is so much more than high European piss-elegance, but it is that, too, and its pretension is loving, unabashed and unabating. More than noodling and doodling, it’s the small tragedies of all the characters, who breathe, moan and speak sardonically of all their confrères, as well as partners, sexual or fiduciary, past as well as potential future ones. 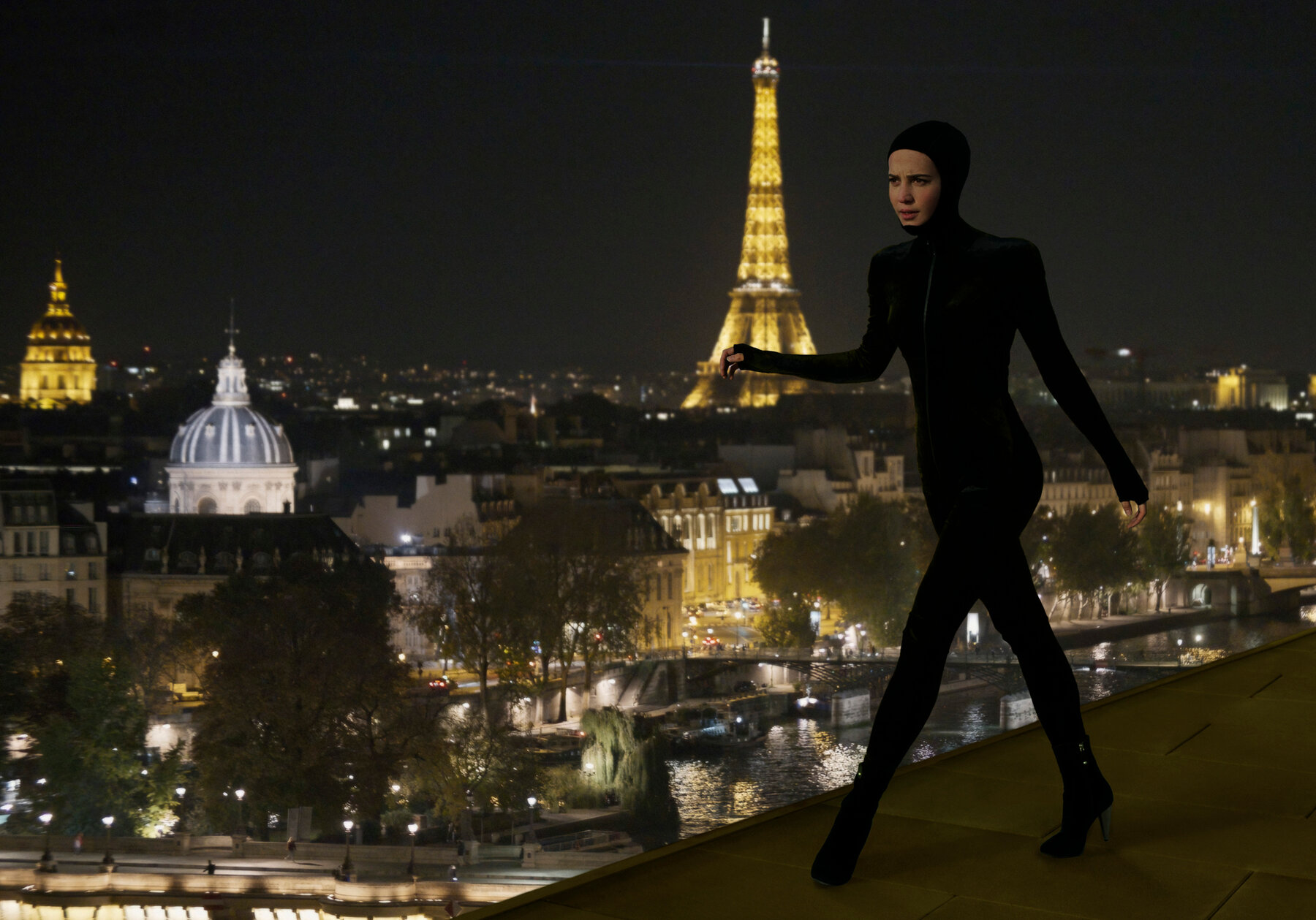 The to-and-fro as the series-within-the-series begins (and begins to collapse in on itself) is casual yet cumulative. While the id and alter ego of the series prowls the rooftops of Paris by night, there is a delightful, concerted offhandedness to the way the characters interact, more open behind the scenes, certainly, than within the echoes of the serial from the 1910s. One of the more startling effects, beyond the variations on Mira’s black catsuit, beyond even the fragments of fully restored scenes of Feuillade that are part of the fabric of the series’ effortless slipstream, is Vidal referencing frames and costumes and themes, manifesting them in his hand on his iPhone, quickly shifting from portrait to landscape. Poof! The footage from 1914 fills the frame on HBO fucking Max.

Historically, many good movies and great entertainments have arrived when filmmakers have time to work a lot and to think some but little time to overthink. From chaos comes a burning clarity. Paul Schrader, who reduced the means of his fine, recent movies to a bare twenty days of shooting on the smallest budget possible, lavished praise on “Irma Vep” on Facebook: “Is it possible for a show to be too good for its own good? Assayas’ series is the smartest, coolest movie ever made about moviemaking. So meta that it makes one wonder, ‘[Am I] enjoying this as much as I think I am or do I just think I’m enjoying it as much as it makes me think I am?'” I may be out on a limb with Schrader.

Assayas is reflective, and articulate, to the end. “Once in a while, just for myself, I try to define what cinema is, and the best I’ve come up with is that movies are images that have the potential to look at images,” Assayas says in concluding his interview with Macaulay. “They can represent a world of images, and they protect some sort of freedom. It’s not about judging—they can represent the world of images and the interaction of images by taking a step back and having some perspective.” Bless his beating Gallic heart: “Movies don’t heal you. They open wounds.”

The eight episodes of “Irma Vep” are streaming on HBO Max.