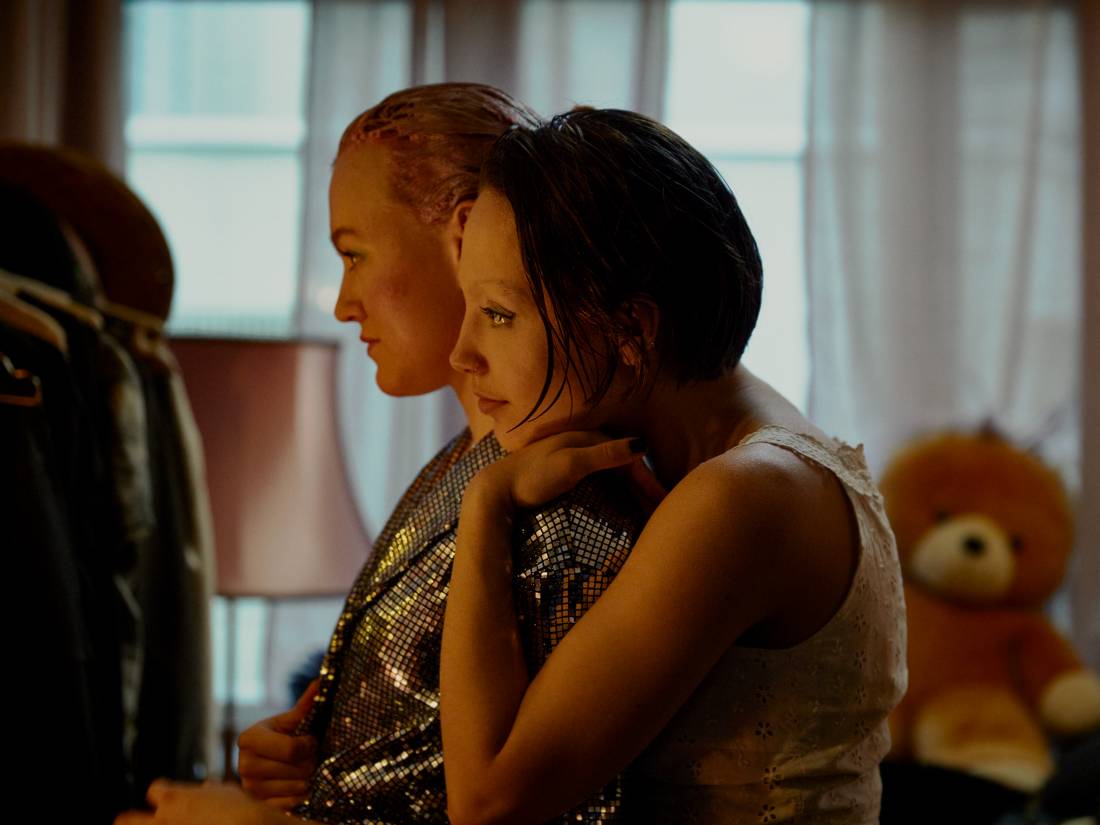 Dr. George Miller’s followup to the thriving overkill of “Mad Max: Fury Road” is “Three Thousand Years Of Longing,” a story-and-a-thousand-stories songline with Tilda Swinton as a professor of storytelling and Idris Elba as an ancient Djinn who’s a playful chaos agent of sorts. A bookish brother to Tarsem Singh’s opulent “The Fall”? Some early shows; opens Friday at Siskel, Landmark Century, Renaissance Place and other screens.

Ayoka Chenzira’s 1994 coming-of-age comedy-drama “Alma’s Rainbow” arrives in a 4K restoration. The Finnish “Girl Picture” is the keenest “hang-out picture” in an age. And “Prey” remains the biggest hit not to see the inside of a cineplex this summer; the director of photography talks style. 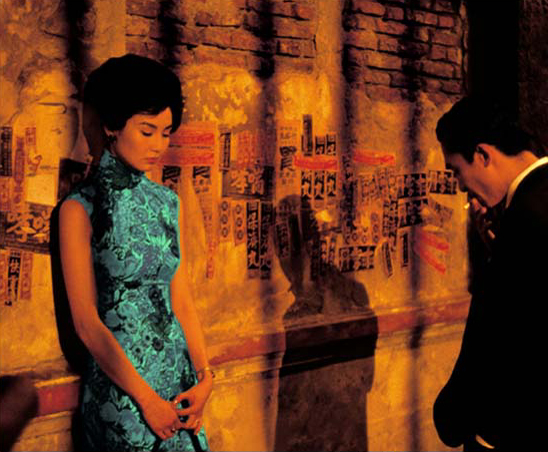 One more chance to see Wong Kar-wai’s turn-of-the-century romantic masterpiece “In The Mood For Love” in 35mm at Siskel, Friday, August 19, 8pm.

“Parting Glances” was Bill Sherwood’s promising directorial debut, a piercing comedy set during the early stages of the AIDS crisis with Steve Buscemi in an early lead role, but no more pictures were to come. “Marie Antoinette” is Sofia Coppola’s underappreciated 2006 teen epic: Versailles ensues. “City Of God” is a Siskel “50/50” encore. Chicago Film Society brings back the rarely seen, racism-aware workplace comedy “Livin’ Large.” Reeling announces its 2022 dates. “Destroy Your Art” shows at the Music Box. A brief video preview of Michael Kutza’s memoir, “Starstruck.” Plus, disparate takes on why several younger generations are watching subtitles with their movies.

Distributors Kino Lorber and Milestone summarize: “Rainbow attends a strict parochial school, studies dance, and is just becoming aware of boys. She lives with her strait-laced mother Alma Gold (Kim Weston-Moran), who runs a hair salon in the parlor of their home. When Alma’s free-spirited sister Ruby (Mizan Kirby) arrives from Paris after a ten-year absence, the sisters clash over what constitutes the ‘proper’ direction Rainbow’s life should take.” I just finished watching it ten minutes ago, and at first glance, Chenzira’s movie is a terrific rediscovery and important missing picture from the 1990s. Julie Dash: “‘Alma’s Rainbow’ was one of the first full-length dramatic narrative films produced and directed by an African American woman in the twentieth century. Chenzira’s much-celebrated and award-winning early work is essential viewing today as much as it was when first released in 1994.” DuVernay: “The matter of matriarchy within families is close to my heart. I think of my great grandmother, my grandmother, my mother, and my aunts who all had a firm, beautiful hand in raising me. I long for more representations of these generational villages onscreen, like those we experience in Ayoka Chenzira’s work.” Siskel, starts Saturday, August 20.

A wholeheartedly happy discovery from Sundance 2022, “Girl Picture” (Tytöt tytöt tytöt), says director Alli Haapasalo, is “a film about the need to be seen.” Three teenaged girls, Mimmi, Emma and Ronkko, go out on three consecutive Fridays in modern-day Finland. Looking for love, looking for pleasure, looking to find themselves.

There are mistakes and misgivings, to be sure, but no guilt to speak of: they’re girls being girls without judgment being imposed from above, whether that’s from society or from Haapasalo. (The film’s interiors and street scenes are lovingly lit, keeping the characters in the forefront, and the nearly-square screen ratio enhances the focus on them.) Siskel, August 17-25. 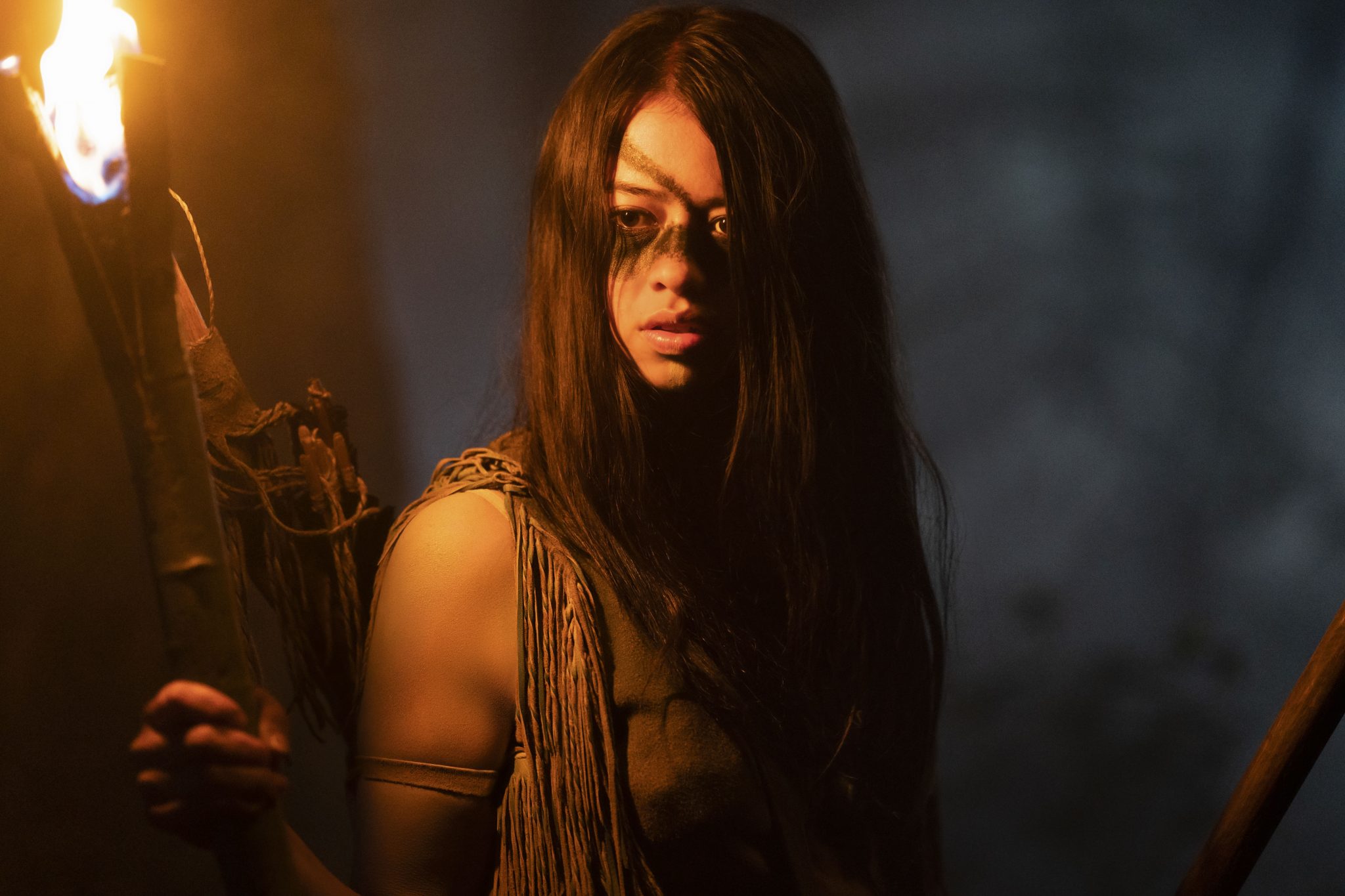 After watching “Prey” and also reading exuberant responses online, I’m more convinced that what should, by rights, been the breakout hit in theaters for late summer 2022, is on Hulu. Ostensibly a sequel within the “Predator” “Universe,” the production from Disney’s Twentieth Century Studios is set over three-hundred years ago in Comanche territory, largely by the light of fires and of the moon, when warriors are faced by the type of otherworldly, technologically advanced monster once faced by Arnold Schwarzenegger. Director Dan Trachtenberg shows mastery of frame, pace and suspense, and the casting is superb, including Amber Midthunder as the central warrior. “Prey” understands the use of widescreen in bold, savage moments of violence, but also of arraying multiple figures in the frame, a rare gift nowadays. Director of photography Jeff Cutter talks post-1980s style at Filmmaker magazine here. “Yeah, there’s definitely shots that have that sort of layering. Dan and I both love anamorphic lenses and the way that they breathe when they rack focus… I love wider lenses closer to actors, where you might get a medium close-up of an actor in the foreground but can still get other actors in the frame. Then, maybe instead of cutting, you rack to another actor in the background. That’s a very Spielberg thing Dan and I are both very influenced by. Spielberg is the master of layering multiple actors within a frame and then, rather than cutting to a reaction, he’ll rack from one actor in the foreground to someone else’s coverage, or an actor will move in the shot and bring you to another piece of coverage. We were definitely inspired by that idea—trying to make shots last as long as possible and make pieces of coverage connect in one frame or one shot.” (One advantage over theatrical is the availability of the Comanche-language version of the film at the press of a button.) “Prey” is streaming on Hulu. 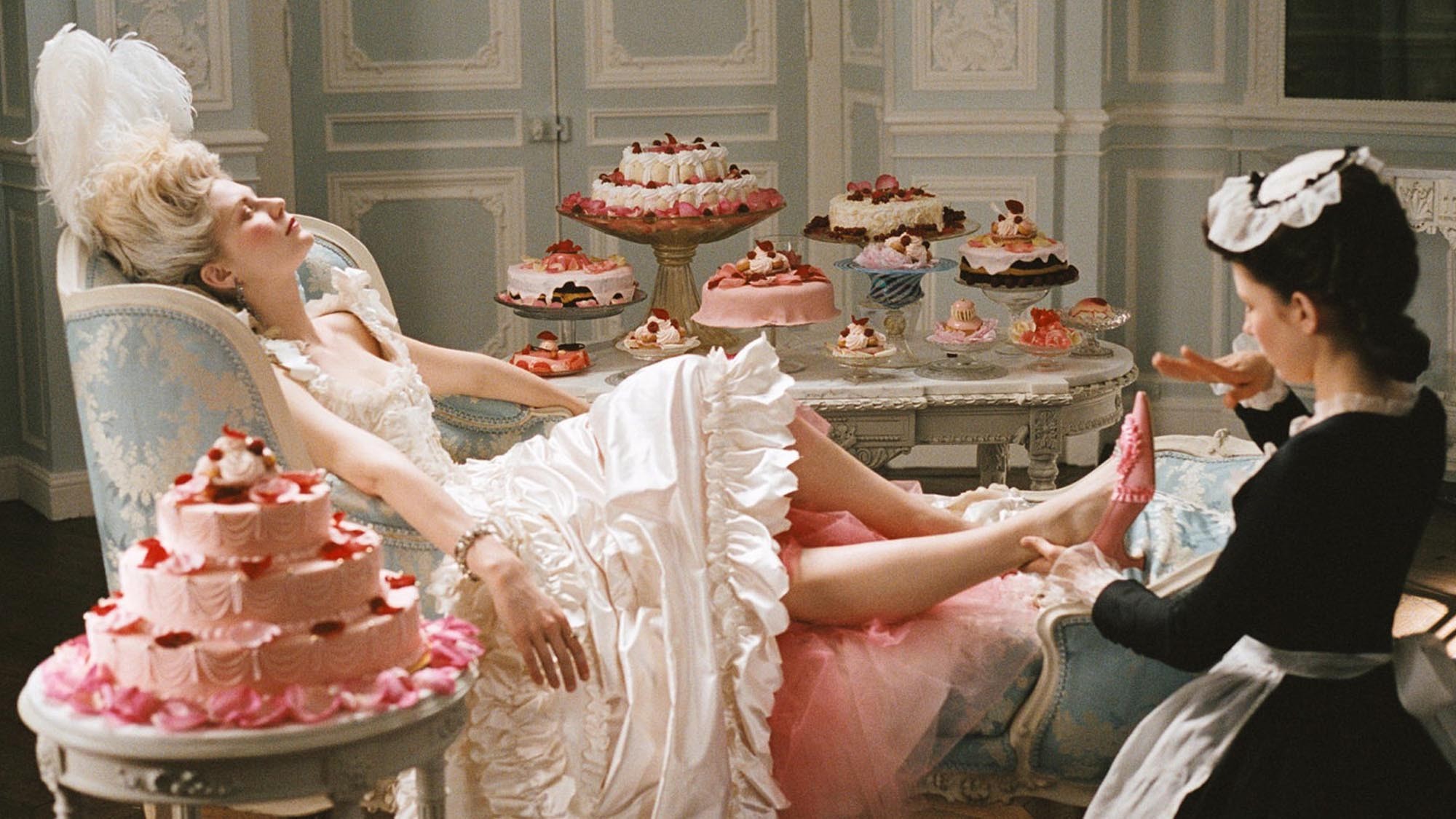 Jersey girl Kirsten Dunst plays the Austrian fourteen-year-old who was stripped at the French border of nationality, pug and clothing, to become “Marie Antoinette,” wife in an arranged marriage to Dauphin Louis, eventually to be King Louis XVI (a chunked-up Jason Schwartzman). When the marriage remains unconsummated for seven years, Marie becomes indiscreet, a party girl, drenched in the decadence of gowns, wigs, shoes, champagne and all manner of cookies and cake. Writer-director Sofia Coppola is self-aware: as a child of privileged American movie royalty with many friends in fashion, the film is as “personal” as “The Virgin Suicides” and “Lost in Translation.” There is a moment when a torch-bearing mob has surrounded Versailles and Marie tentatively approaches, emerging from darkness to watch them wide-eyed. There is a hush. She curtsies quietly, deeply. Then the crowd begins to boo again. It evokes the death of Michael Corleone’s daughter at the opera that ends “Godfather III.”

The soundtrack bursts with anachronisms. Who, dancing away at clubs in the early 1980s, would imagine the first musical to use the melodies of that era would be this one? Opening to the fierce chords of Gang of Four’s “Natural’s Not In It” (a bit of a hint?), and including songs by the Cure, “Marie Antoinette” also boasts a masked ball scored to Siouxsie and the Banshees’ “Hong Kong Garden.” “The New Romantic music I listened to when I was a kid had this playfulness in the way bands like Bow Wow Wow and Adam Ant referenced the eighteenth century,” Coppola told me upon the film’s release in 2006. “It was a film about teenagers and that mischievous, vital, youthful period. We had a little bit of a punk attitude to say that we were going to do history from this young girl’s point-of-view. I wanted to have a real contrast between the world of the adults in court and the kids.”

Of this brightly colored world, “I mean, it’s not a documentary or a history lesson, I wanted it to be impressionistic and as close to what it might have felt like to be there at that time. When I saw ‘Amadeus’ and they were just speaking in their regular accents, they felt like real people to me, as opposed to someone living in some other era that I couldn’t relate to.The biggest challenge to me was to work on that scale and still stay focused, not get lost in all that. To me, it was important to keep the focus on the main characters, and the acting and the emotion, and not just get carried away with all the grandeur around.” 35mm. Music Box, August 20-21, 11:30am.

Brazilian director Fernando Meirelles made a lot of commercials and co-directed a couple of kids’ films before taking on “City of God” with co-director Kátia Lund, the adaptation of Paulo Lins’ novel, which is a fictionalization of the author’s youthful experience surviving the favelas of Rio de Janeiro. Indelible fun to watch, “City of God” is a self-mythologizing portrait of the allure and despair of juvenile crime in a milieu that offers no other escape. Does the subject matter deserve a less psychedelic approach than Meirelles and his collaborators have taken? Is the movie mere gloss, “Pixote” on speed; fever-dream Tarantino; epic blaxploitation? It’s a lot more, dizzying, dazzling, unflinching in the face of the harshness of what its many characters experience in the tale’s three samba-and-pop drenched decades of speakable horror. Complicated, bloody, humid, lurid, flashy, inspired and even terrifying, Meirelles and Lund’s movie may reach its emotional height when a gang of children, known as the Runts, armed with pistols from one of several warring drug lords in the favela, recruit even younger children at gunpoint. What happens next is terrible, gut-wrenching and so much more honest about the origins and results of youth violence than our own filmmakers seem willing to be, or their financiers care to be. It’s the kind of art that genuinely confronts the question, what is the value of human life? And why are we so reckless with the fate of the youth of the world? A “50/50” series encore, Siskel, Saturday, August 20.

“Parting Glances” (1986) was an auspicious start to a career that never was: Bill Sherwood’s spunky, punky, sparkling romantic comedy and look at contemporary gay friendship of the mid-1980s takes place across a single day, but could go on for so much longer. Steve Buscemi’s central figure, Nick, is the role of a lifetime, even in a lifetime that features so many other fantastic roles. Preserved by the UCLA Film & Television Archive; their work is described in this video. 35mm. Preceded by Todd Haynes’ thirty-minute”Dottie Gets Spanked.” Part of the “Pioneers of Queer Cinema” series. Siskel, Saturday, August 20.

The fortieth edition of the Reeling Chicago LGBTQ+ International Film Festival is slated for September 22-October 6, with “two weeks of powerful filmmaking with over a hundred films from LGBTQ+ filmmakers all over the world. Poster and updates here.

Jason Pargin, author of “John Dies at the End,” posts on Twitter, “Another current media trend I’d have never predicted: Lots of people watching with the captions on because sound mixing is so shitty that you can’t tell what people are saying, and instead of studios adjusting the audio, audiences gave up and started reading their shows instead.” A variant take, from the Guardian: “A study last November found that four out of five viewers aged between eighteen and twenty-five said they use subtitles ‘all or part of the time’ compared with only a quarter of those aged between fifty-six and seventy-five.” The reasons include “the fact that the likes of Netflix have opened up the availability of non-English-language programming (which is one of the best things about streaming services), and have helped normalise subtitles for people who aren’t hard of hearing. There is also, of course, the fact that many of us now watch television while simultaneously staring at our phones.”