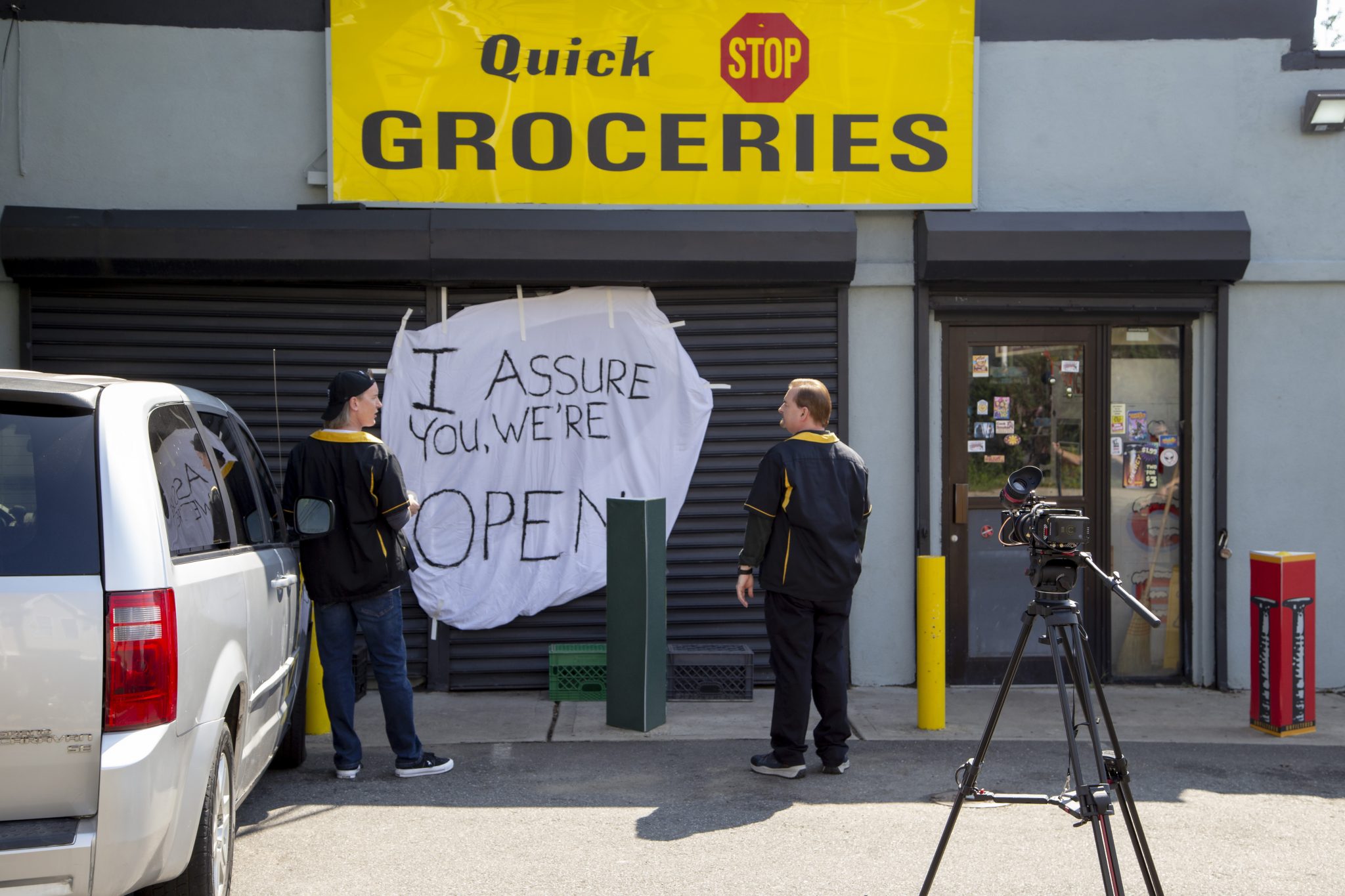 “Uh, no… I’m a fucking filmmaker and any filmmaker worth their salt would know that the colors in this place are fucking ghastly, the only way you could deal with them is to neutralize them by going to black-and-white, which also kind of acts as a commentary on the soulless nature of commerce while subliminally giving the impression that they’re watching our heroes from the perspective of an imaginary store security cam… I’m shooting it in black-and-white, or I’m not shooting it at all, motherfuckers”: this is my favorite passage of writer-director-raconteur Kevin Smith’s return to what appears to be the most profoundly deep of shallow Jersey wells in “Clerks III.”

I never saw “Yoga Hosers.” Is that a bad thing? “Clerks III” returns to the Quick Stop Grocery for newfound japes on mortality—Smith had a heart attack in real life and recovered, as does a central character  in the new movie—and completely familiar gags about youthful male fixations of earlier installments (hello, “mouth to ass”), and relentless swears motor along. Meta meets meta when the character in recovery decides to make a movie about his decades behind the counter: “I see myself more as retail’s Richard Linklater.”

Mismatched camera angles and all, the melange is nostalgic and likable and annoying as fuck, particularly since no one onscreen, except the players in an audition montage, has screen presence, let alone charisma. Danny Trejo, Ben Affleck and Fred Armisen all take an afternoon’s pleasure retooling the lines “I’m not even supposed to be here today!” and “I’ll fuck anything that moves!” (When Smith stops mugging as Silent Bob and speaks, it’s a breath of fresh, foul air.)

There is a thread of disputation online in the days leading up to the world premiere of Steven Spielberg and Tony Kushner’s “The Fabelmans” at the Toronto International Film Festival: who has the “right” to recollect their childhood memories and make movies from them, to present them as “art”? I would answer: the players who find a way to swim in a costly and always-fraught system of production and distribution and brighten up a screen or two. That would include Tony Kushner and that would include Kevin Smith.

But I again recall the words of a blessed child, a croupy little girl, who spoke plainly during a Chicago press screening about forty-five minutes into “Shrek The Third”: “Mommy, can we go home and watch ‘Shrek’?” During “Clerks III,” I felt such good feelings, pangs, even, toward what Kevin Smith and his crew had achieved with the 1994 release of “Clerks,” which in one of the many meta touches, we are reminded was budgeted at $25,000: “Technically it’s $25,575, but it’d be way more if we were in Canada.” I have a feeling we’re not in Canada, but New Jersey is right at hand.