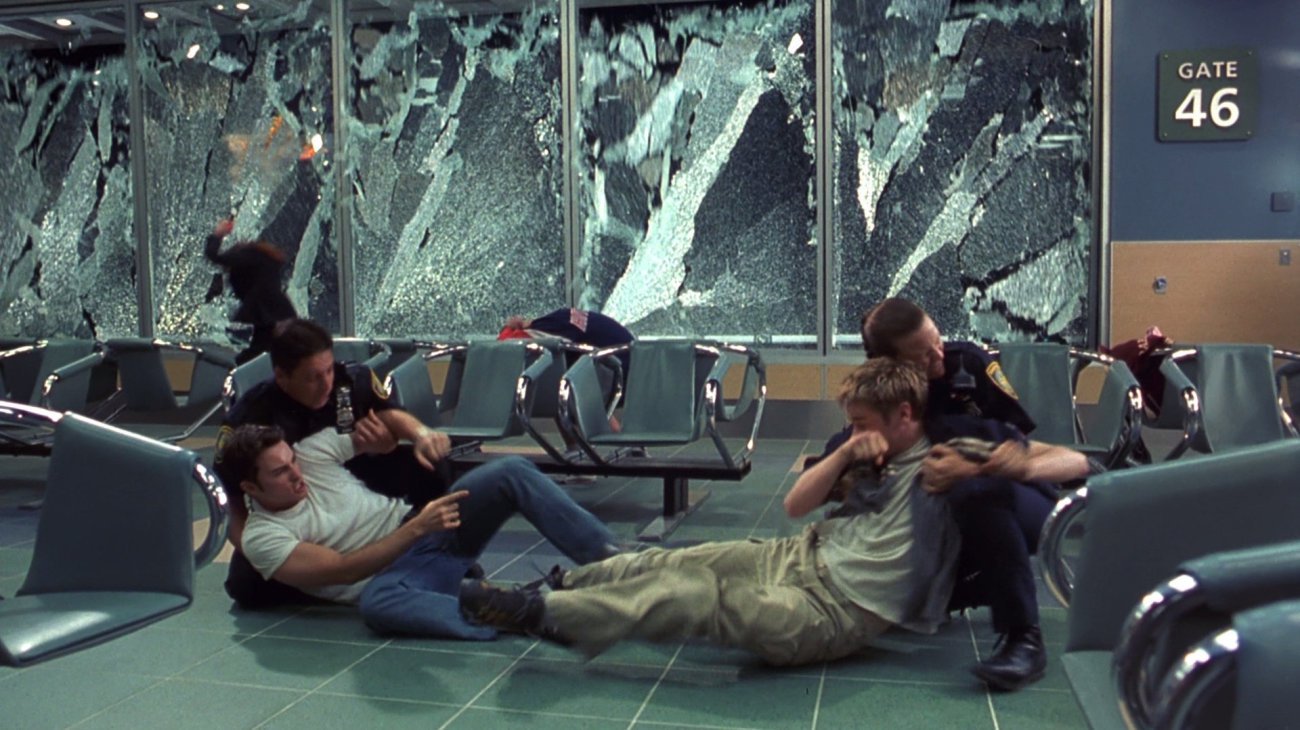 There’s still a drought of wide theatrical releases, but there’s a lot of other action on screens around the city. An awful lot of the movies and appearances listed below are on Monday, October 3: see at least one! “Forgetting Sarah Marshall” and “Get Him to the Greek” writer-director Nicholas Stoller’s gay rendition of a Judd Apatow joint, produced by Judd Apatow, “Bros,” opens Friday in theaters, co-written by and featuring Billy Eichner.

Taciturn eighty-year-old master Walter Hill is about to receive his first, hefty English-language print encomium; in the meantime, his Christoph Waltz-starring Western “Dead For A Dollar,” which debuted at the Venice Film Festival early in September, is in theaters and available online.

“Athena,” which filmmaker Romain Gavras describes in detail to Vulture’s Bilge Ebiri as a movie designed to meet the formal challenges and contours of the streaming experience, is streaming on Netflix; it may take extra effort to find it.

Taiwanese master Tsai Ming-liang makes two appearances in Chicago, at Doc Films on Saturday and Siskel on Monday. Doc partners with the University of Chicago Center for East Asian Studies, the Gene Siskel Film Center and the Block Museum of Art at Northwestern University to present the Chicago portion of Tsai Ming-Liang’s 2022 U.S. tour. The Saturday event at the Max Palevsky Cinema includes Chicago premiere screenings of “Light” and “Your Face,” followed by a panel discussion with director Tsai Ming-Liang and actor Lee Kang-Sheng as well as an audience Q&A moderated by University of Chicago professor Paola Iovene. Monday at Siskel, Tsai gives an artist lecture, with an audience Q&A. Tickets are free, but must be obtained in person at the Siskel box office one hour before lecture start time. Monday, October 3, 6pm. More at Tsai’s website here.

In a year blooming with showings of movies by Jacques Rivette, Doc is featuring Rivette’s second feature, “The Nun” as part of an ongoing retrospective. Writes programmer Kathleen Geier: “In an era when political paranoia is at a fever pitch, his haunting films, with their conspiracy-obsessed protagonists, feel especially resonant. At a time when Hollywood products are more formulaic than ever, his radical experimentation is all the more thrilling. Finally, his films are greatly benefitted by being seen on the big screen, in the immersive environment of a theater. His films are demanding but also richly rewarding. Rivette is the rare filmmaker who can make you see not just cinema, but the world, in an entirely new way.” Doc Films, Sunday, October 2.

“Hocus Pocus 2” sequelizes on Disney Plus. A new Peter Farrelly joint, his first since “The Green Book” took Best Picture in 2018, “The Greatest Beer Run Ever,” debuts in theaters and on Apple TV Plus. Co-written by Deerfield’s Pete Jones (writer-director of the Chicago-made 2002 “Project Greenlight” release “Stolen Summer”), it features Russell Crowe and Zac Efron in a true story of a guy bringing cans of Pabst Blue Ribbon to his buddies who are in the Vietnam War in 1967. Sierra Pettengill’s unsettling, haunting “Riotsville, U. S. A.” opens at Siskel. “Uncle Boonmee Who Can Recall His Past Lives” is in 35mm at Siskel as the week’s “50/50” feature. 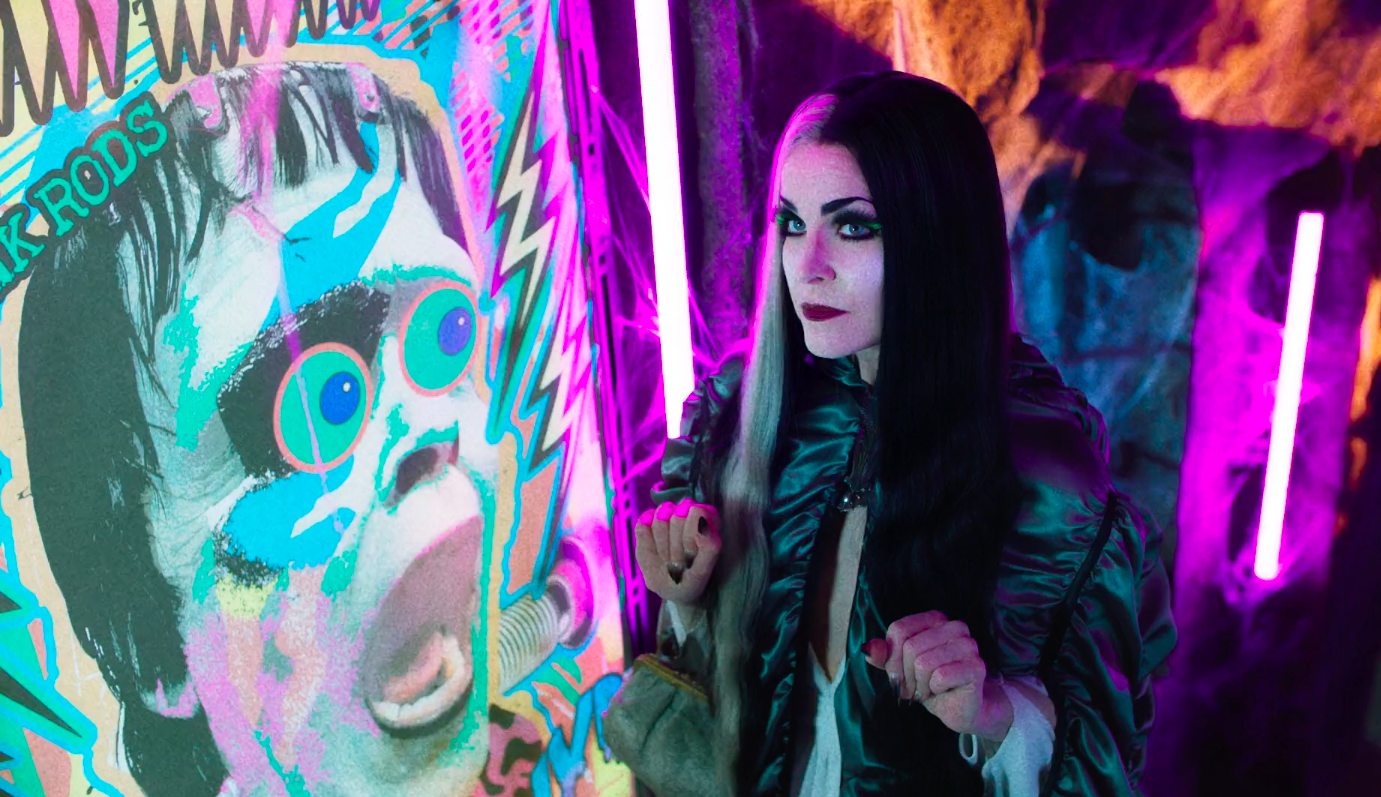 Universal sold Rob Zombie’s “The Munsters” to Netflix, and boy, can you ever see why. You’ve never seen as many colored gels since middle-school prom. The seldom-modulated performance style is also… unique. Andrew Dominik’s ample and amply controversial “Blonde” is streaming on Netflix after only a few days on a single screen in Chicago and a couple weeks of internet contumely.

CIFF founder Michael Kutza signs “Starstruck,” his memory book of the first five decades of the Chicago International Film Festival at Siskel on Sunday, October 2 at 3:45pm; ticket prices can include a copy of the book personally signed by Kutza.

The Music Box is showing Ana Lily Amirpour’s first feature, “A Girl Walks Home Alone At Night” as part of The Music Box of Horrors; A marathon of “Final Destination” movies, one of the apotheoses of high-grind New Line Cinema, in 35mm as part of “The Music Box Of Horrors: Scared Stupid.” John Waters: “Here they are—extreme, astoundingly perverse, darkly funny, and, most importantly, supremely surprising films that turn me green with envy. Why oh why can’t I make films like these—ones that jolted me out of all cinematic lethargy? Exploitation, art, horror? There’s no such thing as genre when you’ve slipped to the other side of cinema-sanity. See for yourself the movies that drove me beyond the pale of normal movie madness. Jealousy over other directors’ careers is a terrible thing to waste.” Music Box, Saturday, October 1, 9:30pm.

And the Chicago International Film Festival’s Industry Days slots their events, and adds more special guests to their roster for the October 12-23 event. 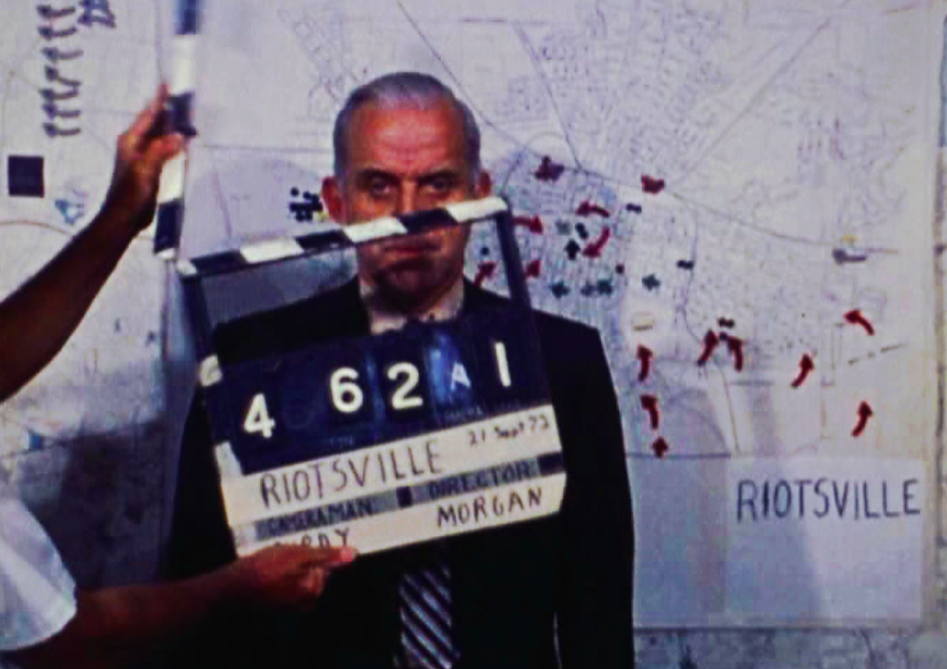 Sierra Pettengill brings terror to home shores with her beguiling, insistent found-footage documentary, “Riotsville, U.S.A.,” built entirely from military training films and appropriated contemporary imagery of a moment in 1968 where fake towns were fabricated so that trainee soldiers could infiltrate streets and then attack “looters” and “rioters” in their midst. The military is the medium: the streets of America are the message. The roots of the street-level militarization of American peace offers are explored with a fragrant, lyrical, even brutal touch. 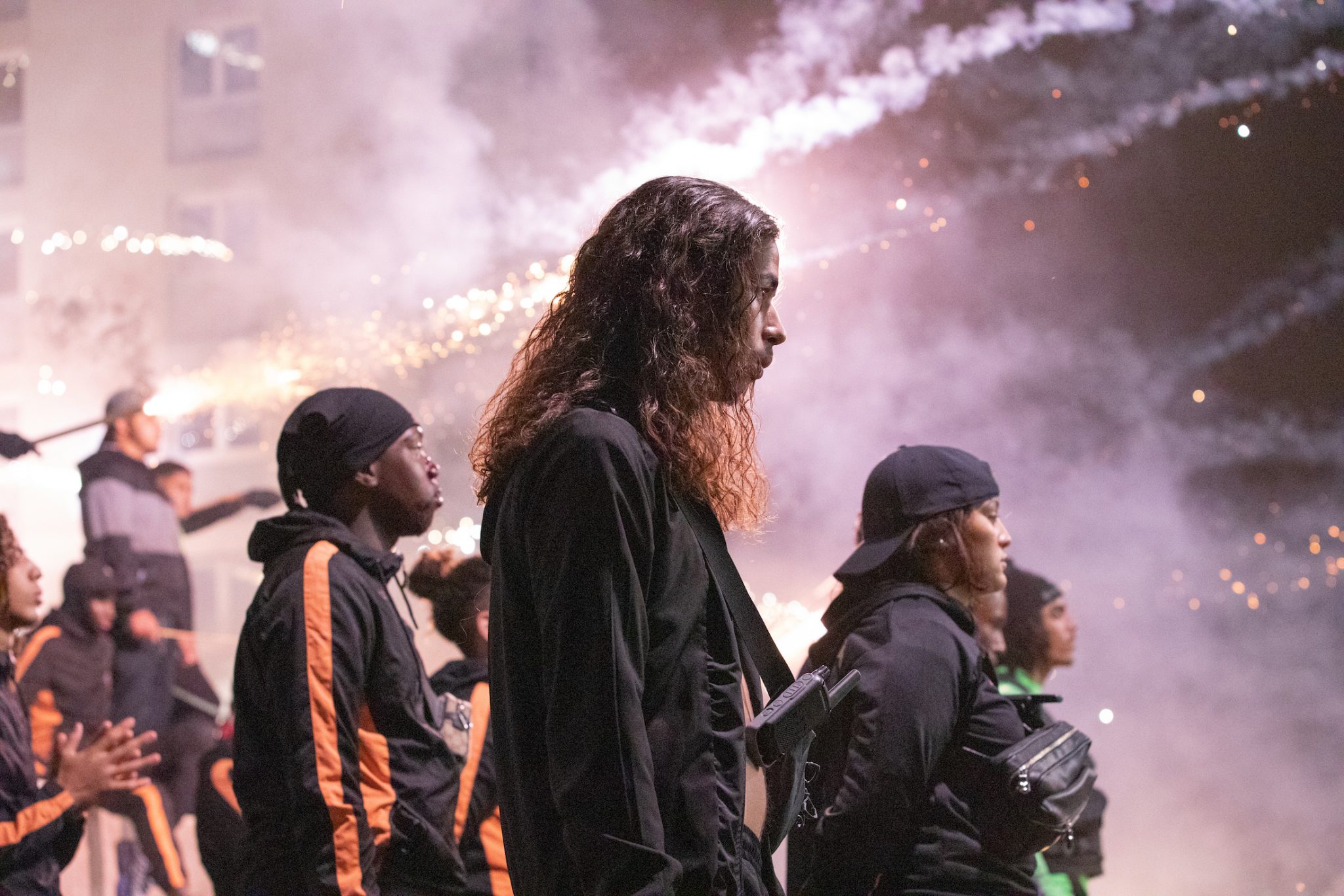 “It’s my first time doing a film for a platform and for Netflix in particular,” “Athena” filmmaker Romain Gavras says. “And when we were writing with Ladj Ly [“Les Misérables,” 2019] we were thinking we needed to start really strong because even when I watch a Netflix film, if it’s not interesting in the first five minutes, I’m going to go away.” By contrast, he says, “when you do a cinema film, you can ease people in because they’re not going to leave after minute ten or fifteen.” Bilge Ebiri listens to more of the writer-director’s ambitions. “The rest of ‘Athena’ is just as electrifying—filled with gloriously choreographed sequences of seemingly unbridled chaos,” he writes in his multi-pronged campaign to sustain awareness for the fantastic movie that dropped on Netflix last week. I was amazed and hope to write more about it after seeing it again, but for the moment, I’m good with Ebiri’s perspective, and I think I can sign onto this from writer-artist-producer Aleš Kot: “an urgent, angry act of formally and politically radical mainstream cinema. About as good as movies get.” 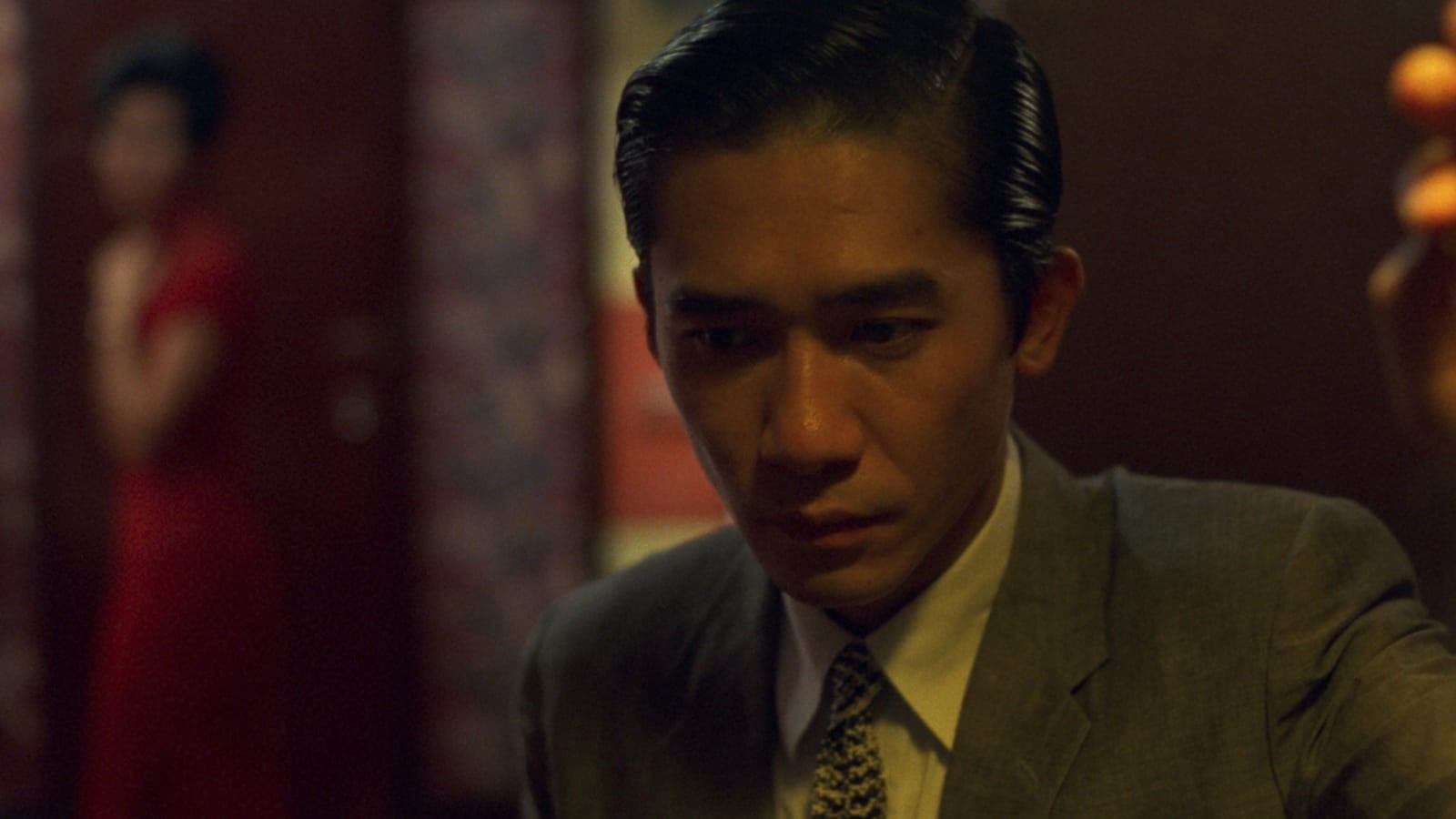 “In The Mood For Love”

Three more 35mm Chicago showings this weekend of Wong Kar-wai’s majestic 2001 heartbreaker, “In The Mood For Love.” Cinematographer Christopher Doyle on his world: “Rapture. Enchantment. I am like a kid in a candy store. How a space engages us; how an actor moves within the space, light reflects off faces and surfaces. It totally entraps me, sucks me in and then we dance.” And “In The Mood For Love”? “I think we have to blame the production designer, costume and make-up guru, and later genius editor William Cheung Shu Ping. William and I had worked together on five films already, and then he suggested to Kar-wai that we three work together. Our three personalities are so diverse that I guess William was expecting some kind of creative fission among the three of us. The give and take of our personalities and our total commitment to our space is the reason the films feel and look and resonate the way they still seem to do. The work is like sculpture; we take a piece of rock or idea and try to chip away what is extraneous or distracting. Anything that doesn’t resonate is of no more use. Of course how does it resonate, what does it really say is a shifting sand of possibilities.” In the main auditorium at the Music Box, September 30-October 2.

“Uncle Boonmee Who Can Recall His Past Lives”

It’s a Buddhist action movie. There are red-eyed men covered in thick black pelt that grew after sex in the jungle with ghost monkeys. There’s a homely princess worshipped and serviced by a kindly, flattering catfish. It moves slowly, glacially, even, yet with the assurance and high absurdity of an ornate dream. The first time I saw “Uncle Boonmee Who Can Recall His Past Lives, ” Apichatpong Weerasethakul’s 2010 Cannes Palme d’Or Winner (from a jury headed by Tim Burton), I had jet lag and nodded a couple of times. Weerasethakul, who did graduate work at the School of the Art Institute and asks that you call him “Joe,” has said in interviews that he’s not against that: his dreamy worlds mesh with your world of dreams when that happens. The omnipresent sound of crickets unifies the texture of even the strangest emanations of “Uncle Boonmee.” It’s like a folktale told to a child who’s heard it hundreds of times, knows its picayune permutations, accepts them as real. Except, we’re hearing-seeing the stories for the first time, to the same order of disorientation a child might experience. In his installation work in galleries and museums around the world, Joe often uses driving and/or insistent pop music, used to unexpected effect. The same thing happens at the end of ‘Boonmee’: a Thai pop anthem takes over the soundtrack in a city-set scene and men become ghosts who watch themselves watch television before slipping out into the night. 35mm. It’s the “50/50” feature of the week. Siskel, Monday, October 3.

“A Girl Walks Home Alone At Night” is a confident widescreen, black-and-white Farsi-language all-American debut, a bracing post-punk blend of vampire iconography, the spaghetti western, Kaurismäki-like sorrowfulness, post-Jarmusch equipoise, shot in Bakersfield, California, which passes for the nocturnal reaches “Bad City,” Iran. Ana Lily Amirpour’s politically suggestive feature debut is ripe with eye-widening joy from its first frames, its pacing alternately languorous and coiled, the graphic-novel-like imagery emerging and evolving with surrealist stealth. In Amirpour’s own excitable words about her tender, melancholy achievement, “It’s like Sergio Leone and David Lynch had an Iranian rock ‘n’ roll baby, and then Nosferatu came and babysat for them.” Amirpour also has a fantastic ear for music that elevates even the drowsiest, dreamiest passages. Music Box, Monday, October 3.

The Chicago International Film Festival’s fifty-eighth season runs October 12-23, and the attractions for the vital Industry Days meet-up have been announced. “Industry Days is the Chicago International Film Festival’s hub for filmmakers and industry professionals to connect, share ideas and be inspired. We are back and fully in-person—Zoom be damned!—and we look forward to seeing you at our many discussions, events, networking opportunities, and don’t forget to sign up for our Decision-Maker Roundtable meetings, where you can meet up close with top executives from major entertainment companies,” CIFF writes. All events are open to registered Industry Days passholders only unless noted. The full schedule is here.

The Festival has added more special guests, including writer-director Sarah Polley and cinematographer Luc Montpellier, who will receive Chicago International’s Visionary Award for “Women Talking” on October 20. Also: Rev. Al Sharpton and director Josh Alexander will talk about the documentary on Sharpton, “Loudmouth” on October 17.