Claire Denis’ second English-language picture, humid tropical noir “Stars At Noon,” opens at Landmark Renaissance, the Wilmette and suburban Marcus locations as well as on-demand, before its debut on Hulu on October 28.

Writer-director Todd Field returns with “TÁR,” his third feature after sixteen years of unmade work; a stringent filmmaker after Kubrick and Kieslowski’s own hearts. Cate Blanchett is an orchestra conductor consumed by artistry and hubris and living her life her way. (Field this week dropped out of directing episodes of the long-troubled production of the miniseries adaptation of “Devil In The White City,” as did Keanu Reeves in the central role of Daniel Burnham.)

The fifty-eighth Chicago International Film Festival is in full swing until October 23 around the city, including at River East and Siskel.

Jacques Rivette’s rarely screened “Duelle” (1976) is part of the Rivette season at Doc Films. “In the shadowy demimonde of contemporary Paris, the Sun and Moon Goddesses do battle over a magic diamond that will allow the winner to remain on Earth. At the time of its release, this ravishing, daringly experimental, noir-stained fantasy divided critics. But it has since come to be regarded as one of Rivette’s most striking and inventive films, part of a projected tetralogy of which only one other episode (1976’s ‘Noroît’) was completed.” Doc, Sunday, 5pm. 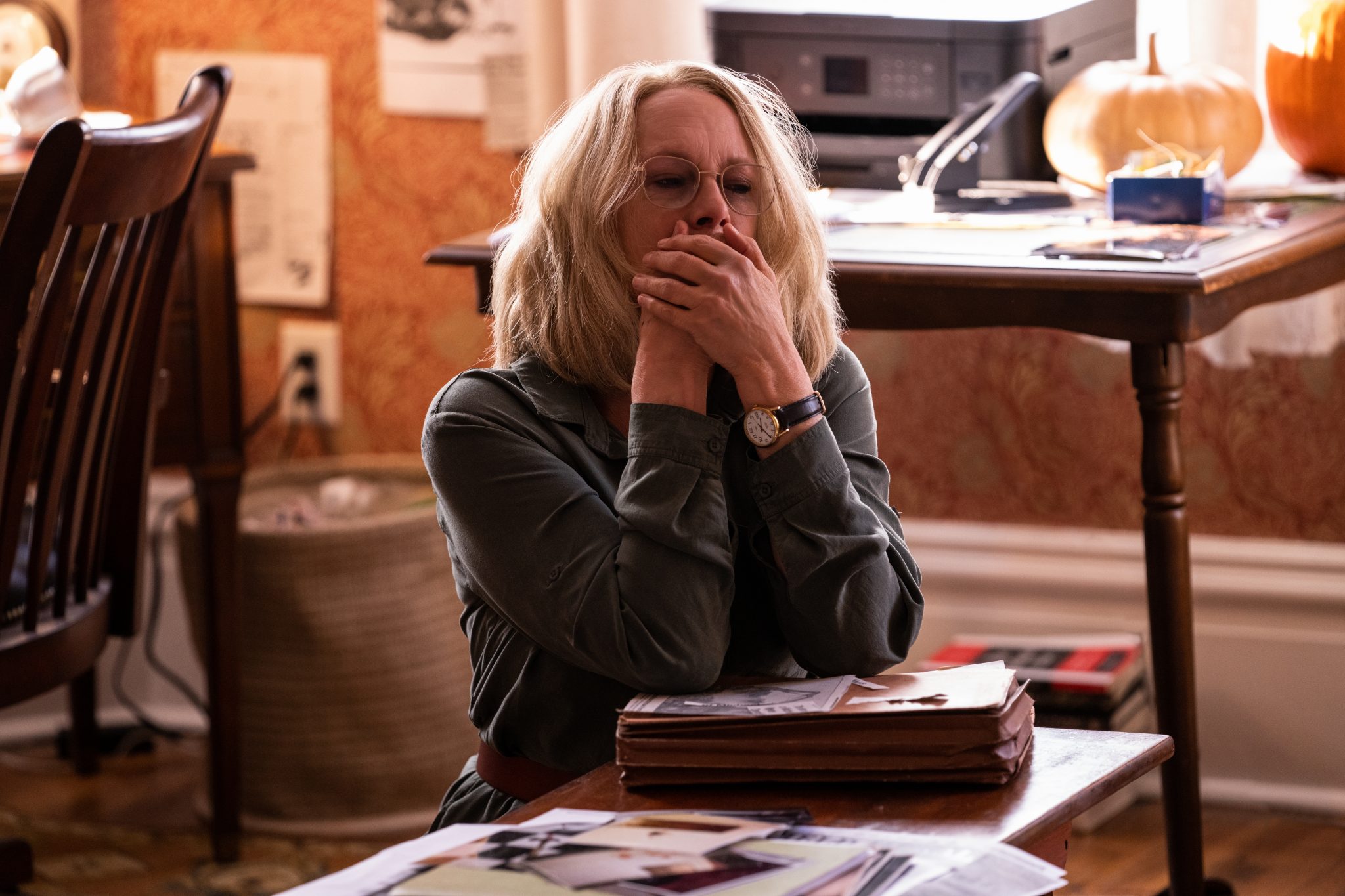 David Gordon Green’s trilogy-capping “Halloween Ends” opens Friday with the promise of Laurie Strode’s absolute, final last stand as the final girl, wide in theaters and on Peacock.  Ruben Östlund’s Palme d’Or winning class satire, “Triangle of Sadness,” opens at Landmark Century. Seaborne vomit, and Woody Harrelson, are promised. Netflix is dropping Edward Berger’s German-language version of Erich Maria Remarque’s “All Quiet On The Western Front” at Landmark Century as well, in anticipation of awards and its streaming release on October 28. Chinonye Chukwu’s “Till,” tells the true story of Mamie Till Mobley’s pursuit of justice after the killing of her fourteen-year-old son, Emmett Till, playing at River East and Showplace ICON.

The only 35mm print of Anton Corbijn’s “Control” plays Sunday at the Music Box.

Claire Denis’ fifteenth theatrical feature, the steamy, languorous Nicaragua-set intrigue “Stars At Noon,” took a prize from the Cannes jury, but its chances of seducing an American audience were taken as small, with a suburban release on Friday paired with a day-and-date release on video-on-demand, followed by Hulu in two weeks. (One hopes all financial partners have been made whole in the dealings.) Adapted from “The Stars at Noon,” the 1986 novel by late, lyrical novelist Denis Johnson, Denis’ film takes place somewhere between that era in Central America and today, with the manners of COVID masking part of the dance between its figures. It’s largely in elliptical, dreamy Denis-town, with actions that follow the path of the book delving more into the mood of bruised doom, rather than the mechanics of movie suspense. Margaret Qualley (“Once Upon A Time … In Hollywood”) is Trish, a lost American trying to get from Nicaragua to Costa Rica, but lacks ticket, passport and American dollars to get away from dangerous complications and from her pretense of being a freelance journalist who is unabashed about sleeping with men she meets for money. A quietly urgent affair on the eve of an election begins between Trish and a promising, ginger-but-shadowy figure, Daniel, an Englishman (Joe Alwyn) who may or may not work for an oil company or for a foreign government. Alwyn’s weary hush matches the excitable tone affected by Qualley: they click, they fuck, and then they fuck some more, in a pricey hotel room, in motel room number thirteen in an hotel named “Porvenir” (the future), and on the run. Glimpses of bodies are hints as much as display for Denis: she’s fond of Qualley’s long neck and wide-wider eyes, and her skinniness in heart-stamped skirts and flowery sundresses, as well as featuring her huarache-scuffed soles and arches again and again: youth battles the rot in the air and often gives in. Qualley’s modestly odd delivery of Johnson’s dialogue, some taken straight from the page, plays both elevated and goofball: “Would I be sitting here if I was the littlest bit sober? No. No.” And “I commit adultery often”: ah, the intrigues from Graham Greene to le Carre and back again. And “Fuck is a good word, fuck is the property of the whole world.” Tindersticks provides the score, of course, and the familiar sound suits the wet and rugged city streets and alleys by night and escape routes by day. Languorous melancholy spoken here. Opens Friday at the Wilmette and other suburban locations and video-on-demand.

The Chicago International Film Festival, like most public film events in the pandemic era, has tightened its roster of movies, to under a hundred features, and a browse through the attractions suggest it’s for the best: while there are movies the distributors of which are pleased to use the fifty-eight-year-old event to platform upcoming releases, even those choices make for what looks to be a strong festival and a great season for movies. (And I’m no Pollyanna in these matters.) Across twelve days, the fest showcases a still-hefty ninety-four features and fifty-six shorts. Something for everyone who can get a ticket, as the saying goes.

North America’s longest-running film festival opened last night with a street party on Southport and with Steve James’ “A Compassionate Spy,” and will feature Rian Johnson’s “Glass Onion: A Knives Out Mystery” before its single-week theatrical run over Thanksgiving as its centerpiece and close with Noah Baumbach’s satire of 1980s suburbia, “White Noise.” Screenings take place across the city, including at River East, the Music Box, Siskel and the Chicago History Museum as well as a little bit virtually and with pop-up screenings at Austin Town Hall and the Hamilton Park Cultural Center in Englewood. The program includes two world premieres, fourteen North American premieres and twenty-two U.S. premieres. Special presentations include a Darren Aronofsky masterclass to accompany “The Whale”; Park Chan-Wook’s “Decision To Leave”; Lukas Dhont’s “Close”; Laura Poitras’ portrait of artist Nan Goldin and her battle against the opioid-dealing Sackler clan, “All The Beauty And The Bloodshed”; Sam Mendes’ cinema-feelie “Empire of Light” and Martin McDonagh’s Irish-ish fable “The Banshees of Inisherin.” Chicago attractions include “Art and Pep,” Mercedes Kane’s portrait of activists Art Johnston and Pepe Peña, whose gay bar Sidetrack has fueled movements and created community on Chicago’s Halsted Street for decades; “Saint Frances” director Alex Thompson’s psychological thriller “Rounding”; and the world premiere of “King Of Kings: Chasing Edward Jones,” a portrait of Harriet Marin Jones’ grandfather, a gambling entrepreneur who was one of the most powerful and richest Black men in America in the 1930s and forties, who went head-to-head with the Chicago mob.

The fest is accompanied by Industry Days, October 13-16. Now in its eighth year, the four-day conference is CIFF’s hub for filmmakers and professionals to connect and share ideas. “By bringing the film community together in Chicago, Industry Days has become an important meeting place for emerging filmmakers from the Midwest, and festival guests from around the U.S. and the world, to connect directly,” Industry Days senior programmer Anthony Kaufman says in a release. “We are particularly excited to be back in person where more meaningful and substantive interactions and networking opportunities can take place.” The complete list is here. The program is here. Tickets and passes here.

The only 35mm print left in North America of “Control” (2007), photographer-director Anton Corbijn’s portrait of the days of Joy Division, gets a rare airing. Corbijn’s exquisite feature debut is restrained, melancholy and gorgeous, a matter-of-fact collection of the facts of the life of twenty-three-year-old Ian Curtis, frontman for the band Joy Division, who hanged himself in 1980. Sam Riley plays Curtis, and it’s a great, great performance. The fearful, vulnerable expressions that inhabit Riley’s face: the weight of two worlds, bourgeois and bohemian, resting upon his skinny shoulders, and atop that, the advancing symptoms of epilepsy (or the cocktail of drugs poured to stem them). It’s a performance of immense physicality: you can read these things into his expressions. But the musical performances, the numbers played live by the actors, are shocking in their simple, volatile shape. Riley’s Ian Curtis is a man who moves to shake the life, his essence, from himself. Not only does it convince as an embodiment of Curtis, but as the loss of control that performing artists sometimes seek. What is as transforming, as transcendent, as rising into a different physicality? (Some say now the saints and sages starved themselves to explore inner space.) Corbijn and cinematographer Martin Ruhe shoot in black-and-white widescreen, often in the very spaces and places where Curtis lived and worked and sang, and the pared-down decors suggest not only the poverty of the Manchester area in the 1970s, but offer objects the weight of religious icons: a Bowie poster, three binders on a desk—lyrics/stories/novels—a curtain in a window. Love tore him apart. “Control” brings him together again. The score, appropriately, is by New Order, who were members of Joy Division. Music Box, Sunday, October 16.

Notes on two films from the Siskel’s “Au Revoir, Godard” series: In the collection “Godard On Godard,” Jean-Luc Godard claims that “Pierrot le fou” was banned to those under eighteen for “intellectual and moral anarchy.” Godard’s fertile production in the years that “Band of Outsiders” (“Bande à part,” 1964) and “Pierrot le fou” (1965) were made partook of its own sort of anarchy, steeped in cash and casting. “What exactly was the starting point for ‘Pierrot le fou’?” poses a Cahiers du Cinéma interviewer in the same book. “A ‘Lolita’-style novel whose rights I had bought two years earlier. That was to have been made with Sylvie Vartan. She refused. Instead I made ‘Band of Outsiders.’ Then I tried to set the film up again with Anna Karina and Richard Burton. Burton, alas, had become too Hollywood. In the end the whole thing was changed by the casting of Anna [Karina] and [Jean-Paul] Belmondo. I thought about [Fritz Lang’s 1937 outlaw couple story] ‘You Only Live Once’; and instead of the ‘Lolita’ kind of couple, I wanted to tell the story of the last romantic couple.” In the more than sixty years since this pair of movies were made, there have been so many borrowings and homages and nods to the finished results of Godard’s provisional, haphazard, yet carefree production methods, it’s still important to realize how strange, obstinate, tender and lyrically strange these two movies were, juggled simultaneously in the mind of this Swiss kid. Siskel, dates and times here.