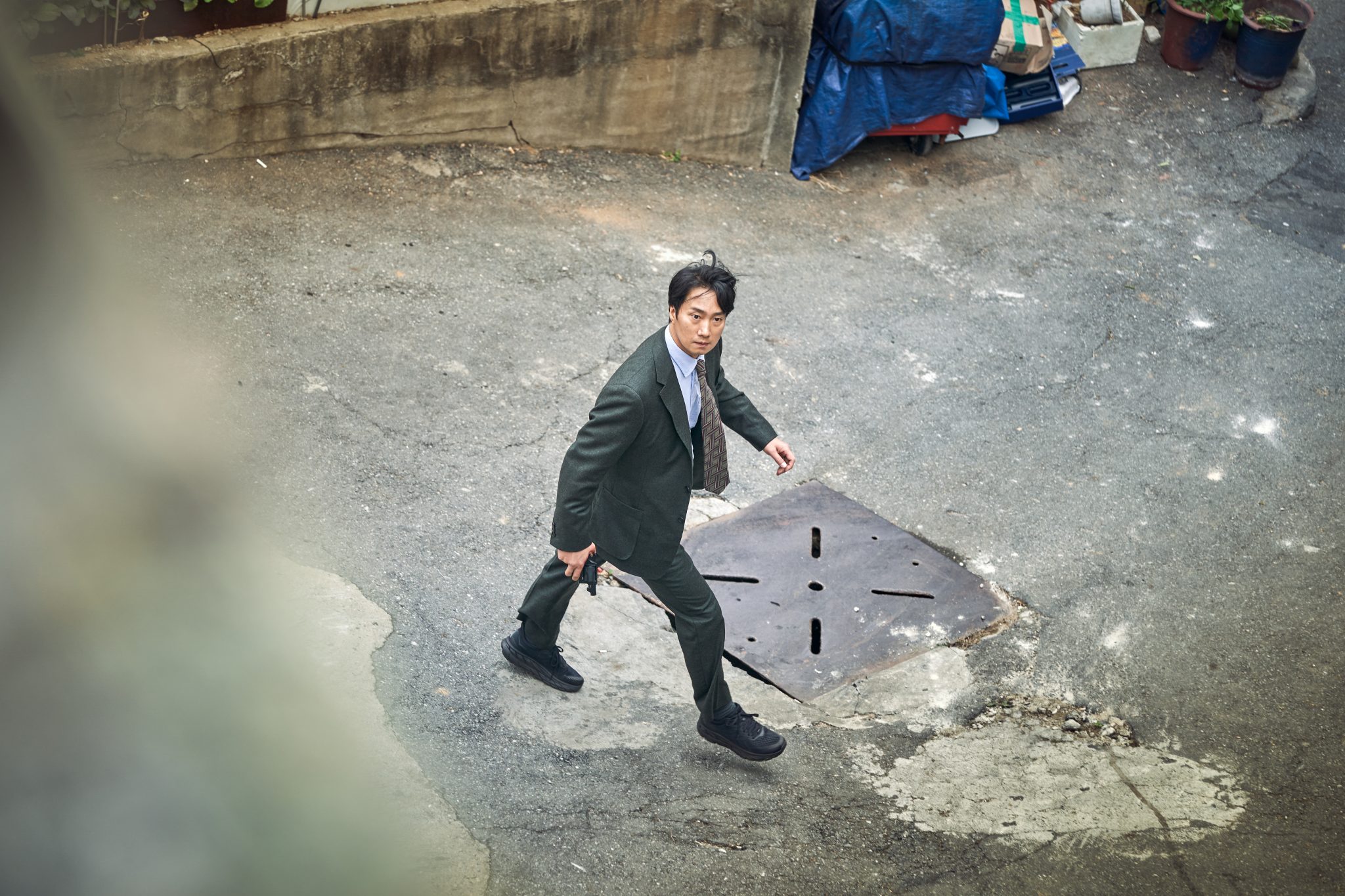 Fantastic films across the city, but few releases from the major distributors. From MUBI in its biggest American push yet, Park Chan-Wook’s Hitchcockian beloved-since-Cannes mystery-romance “Decision to Leave,” perhaps the best-reviewed film of the year, opens Friday at River East, the Music Box in 35mm and Siskel.

Filmmaker Ondi Timoner appears with her simple, heartfelt “Last Flight Home,” her Sundance-premiered documentary (opening soon), about her ninety-two-year-old father’s choice to end his life (which is legal in California) and the steps it took until the final letting-go.  Siskel, Thursday, November 3.

The Music Box has Saturday and Sunday matinees of Gus van Sant’s debut feature, “Mala Noche,” in 35mm. Godard’s “Goodbye To Language” is this week’s “50/50” presentation at Siskel on Monday night (but not in the original 3-D format). Christos Nikou’s pleasing Greek puzzler “Apples” is at Doc, Saturday, October 29.

And James Gray waxes pessimistic about the future of movies. 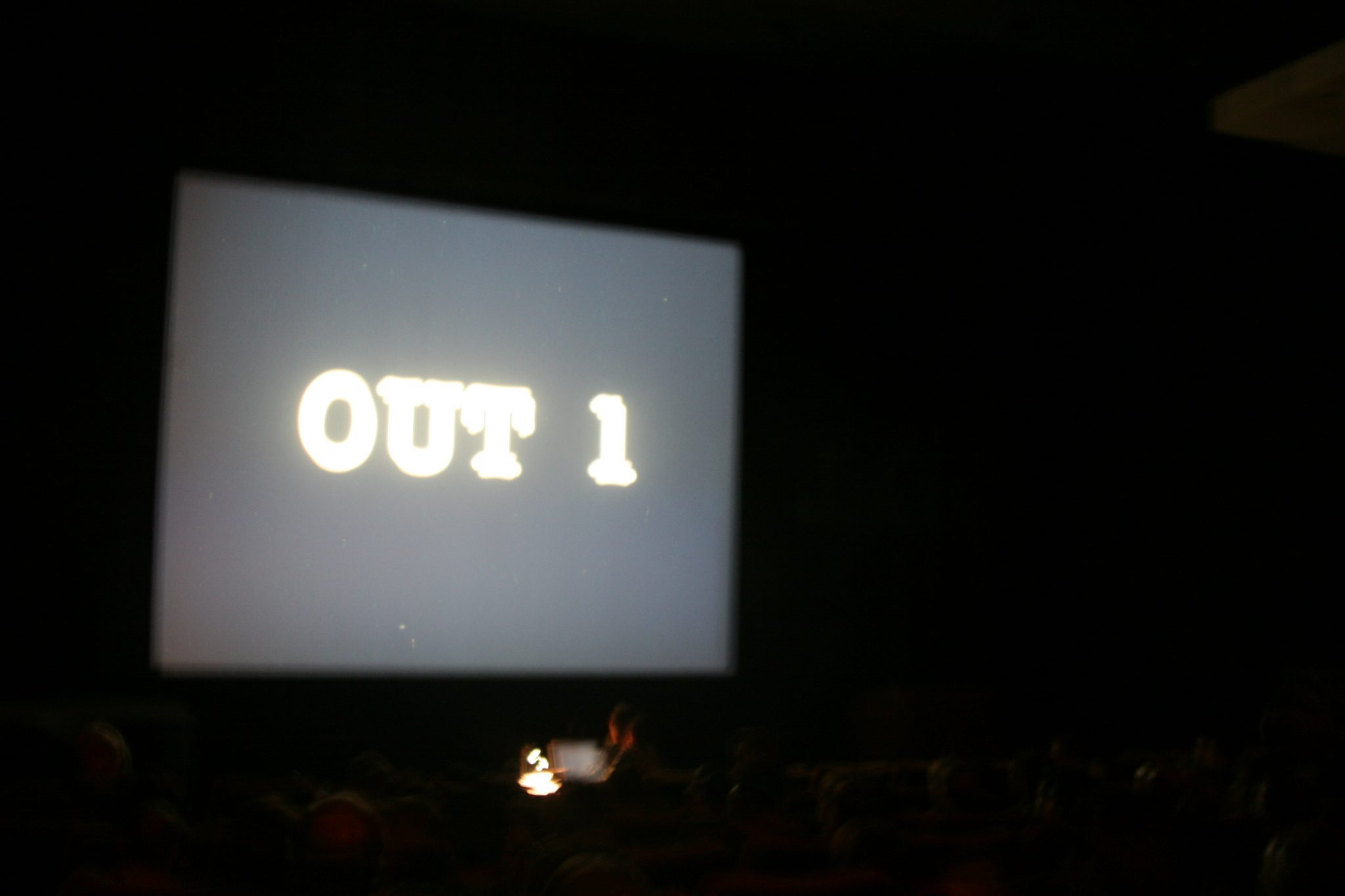 Never lost, but seldom seen, Jacques Rivette’s “OUT 1,” the justifiably legendary twelve-hour-fifty-five-minute epic of post-1968 Paris has been digitally restored, supervised by cinematographer Pierre-William Glenn. It was previously seen only via a single 16mm print circulating to cinémathèques (including a Memorial Day weekend Siskel showing in 2006). I haven’t seen the truncated version, but have seen the original on screen and dipped into multiple ways on the Blu-Ray edition (from Carlotta Films). Its extended form, divided into eight episodes, anticipates the phenomenon of “binge-watching” by decades, and that first Chicago showing in the company of a raft of cinephiles old and young was a fantastic communal experience. It’s worth seeing on a big screen with a big crowd because of the modesty of its gestures and the grandeur of its madness, mingling conspiracy adapted from Balzac’s “History of the Thirteen,” notions of performance, galling acting exercises of the era performed by double, warring troupes, impacted jealousy, labyrinthine intrigues, counterculture quiddities, sudden gunfire and remarkable experiments with time and duration that are almost unaccountably moving. With Jean-Pierre Léaud, Juliet Berto, Michael Lonsdale, Michèle Moretti, Bernadette Lafont, Bulle Ogier. 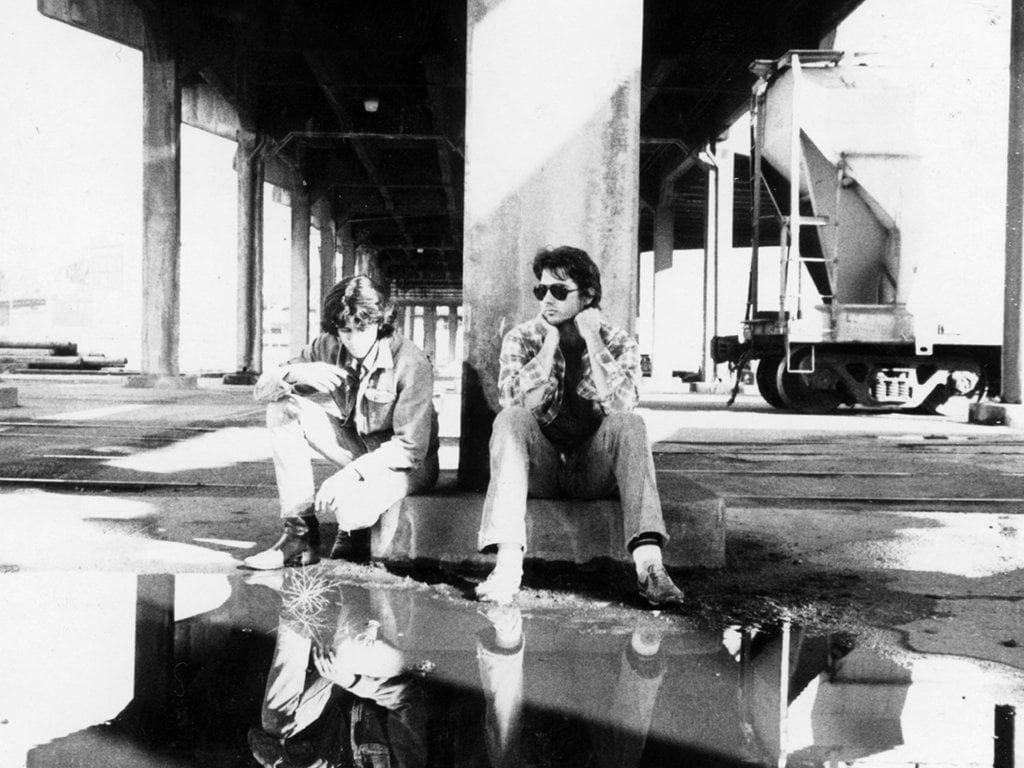 Not precisely a thundercrack, but certainly a pronounced arrival, Gus van Sant’s no-budget black-and-white 1985 feature debut, the Portland-set “Mala Noche,” was as independent as you could get even in that soon-to-burgeon filmmaking decade. A sensibility announces (and pronounces) itself. 35mm. Music Box, Saturday-Sunday matinees. 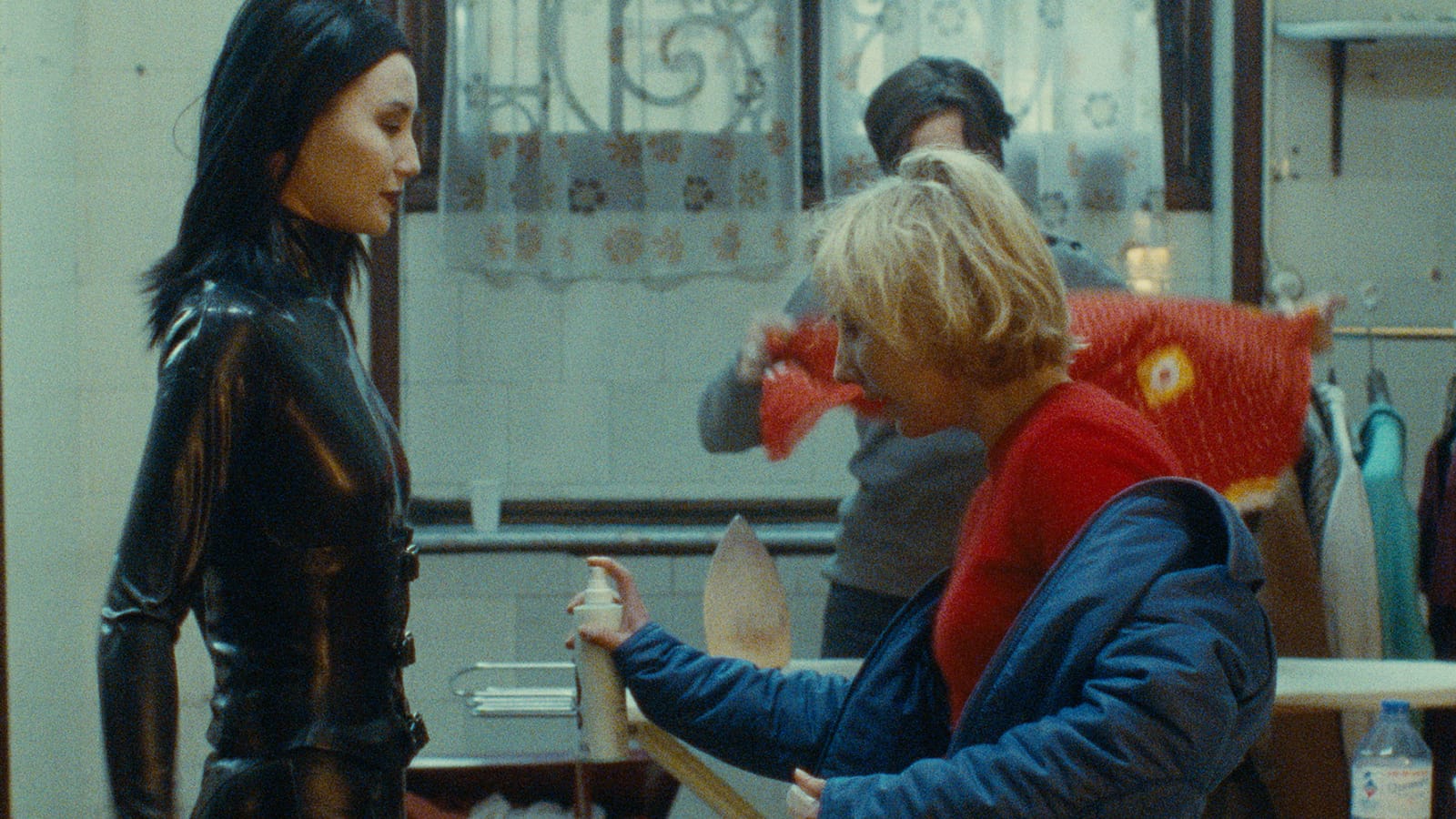 Cut-up and cacophony: Olivier Assayas’ feature version of “Irma Vep” (1996) is breezy yet dense with detail, a punk-inflected meditation on film history as well as a bright comedy about work, lust and latex. Hong Kong’s Maggie Cheung plays Hong Kong’s Maggie Cheung, called to Paris by ill-faded film director Rene Vidal—Jean-Pierre Léaud, a veteran of many films by Truffaut, Rivette and Godard, who remains a mainstay of French cinema himself—who wants her to star in a modern-day remake of Louis Feuillade’s 1915 silent serial, “Les Vampires,” a favorite of the Surrealist movement to come. But Léaud, a troubled soul in his own life, plays a director who’s losing his mind (much as Rivette had a breakdown during a troubled period in the 1970s). Other members of the crew hover over nimble Maggie, such as the wonderful Nathalie Richard as a bisexual costumer who must keep Cheung’s latex catsuit limber and shiny. Assayas litters his script with asides about that now-lost mid-nineties, late-twentieth-century era of filmmaking. He also layers the brisk collage with crisp slabs of pop music (Sonic Youth’s “Tunic (Song for Karen)”; Luna’s French-language cover of Serge Gainsbourg’s “Bonnie & Clyde”). On one hand, “Irma Vep” is another installment in the perennial saga of monstrous egos and conflicting agendas on a film set. It’s also the swink-fwacch, swink-fwacch sound of latex as Cheung slinks dexterously through a corridor toward a jewelry robbery. By movie’s end, the players of all the backstage intrigue are the gang of bandits from “Les Vampires”—battling, bickering, hypnotized, hypnotizing—the film crew are the true vampires. (Here’s a look at Assayas’ 2022 eight-hour miniseries comedy-drama variation on “Irma Vep,” on HBO Max.) Doc Films, Wednesday, November 2. 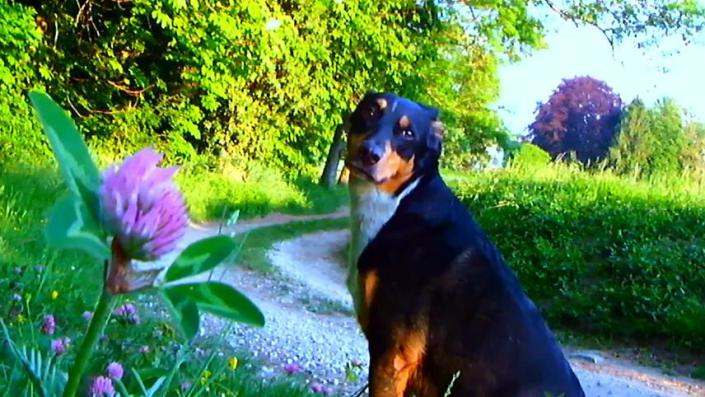 Roxy Miéville: superstar. With querulous, dark, liquid eyes, and a torso that extends from the back of the screen and a long, aquiline nose that juts out over the audience and nearly to your fingertips to be petted, the sleek, sniffulous mutt owned by Jean-Luc Godard is the most lustrous of special effects in his hectic, cryptic provocation, “Goodbye to Language.” Working with cinematographer Fabrice Aragno over the course of four years, the then-eighty-four-year-old Godard wreaks multidimensional effects other filmmakers wouldn’t dare, often created with only a couple of small consumer cameras strapped together and wielded by the filmmaker himself. “Jean-Luc takes images like a cook that goes to the market to buy produce such as apples, legumes, tomatoes, or plums,” Aragno told The Creators Project. “The cook or filmmaker stores all of these images in his fridge. And then he adds them together to create cinema.” The collage of information, glimpses of Hollywood movies, of Nazi Germany, of blunt sexual transactions, of a man at stool speaking of “caca,” of the bluest of blue skies and the reddest of red paint as blood, of citations from literature and philosophy and ironic depictions of how they’re transmitted and mediated in the modern moment will be familiar, perhaps even soothing, to anyone who’s ever immersed their sensibility in his long, winding river of impressionistic essayism. Old dogs, similar tricks, but hardly tired. Siskel, Monday, October 31. 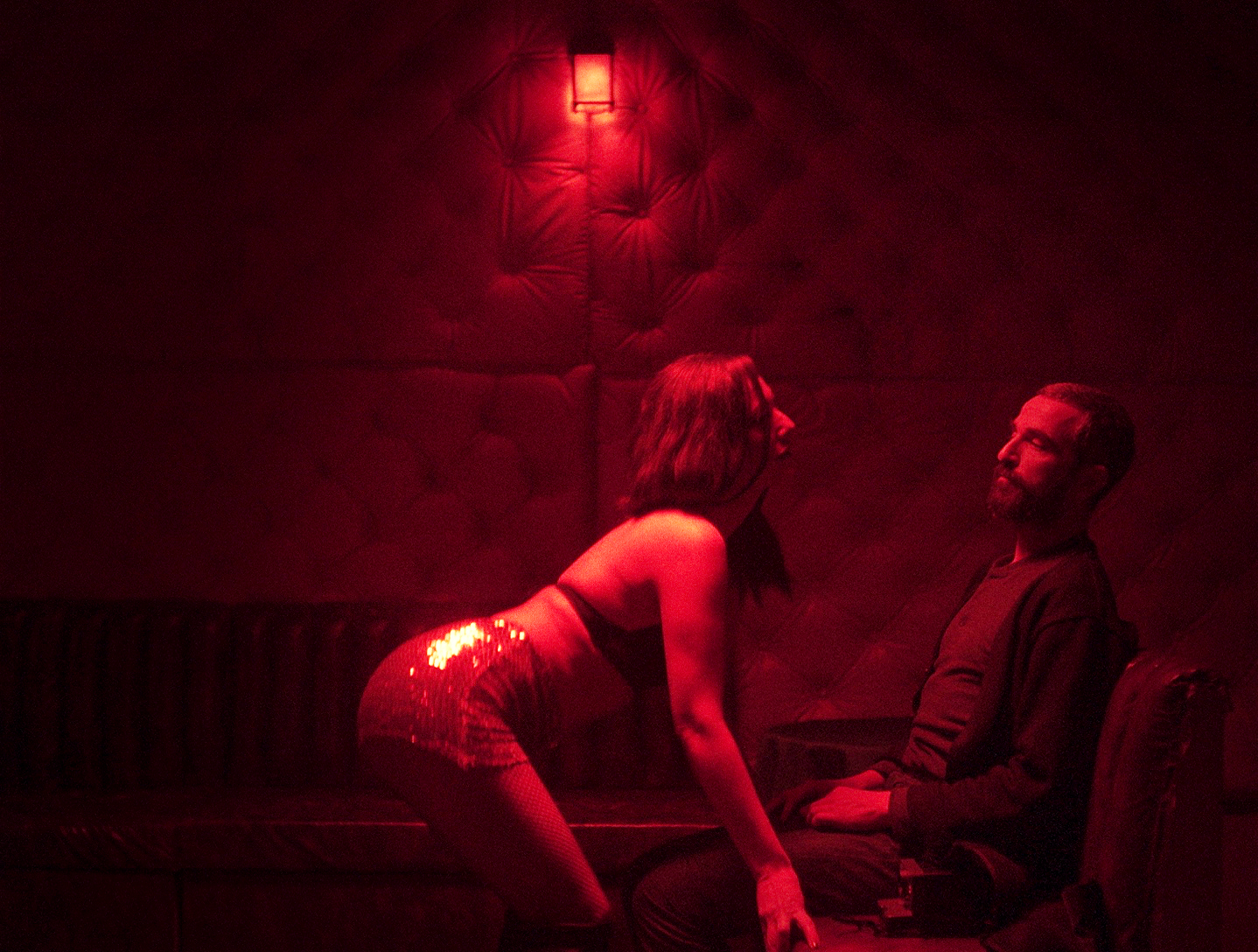 The Greek “weird wave” persists to bittersweet effect in “Apples,” Christos Nikou’s pleasing Greek puzzler. I had forgotten I had watched the Greek film “Apples” months ago in the middle of the night as part of film festival streaming from Thessaloniki; appropriately enough, Nikou’s movie kickstarts its bright strangeness with a pandemic the effects of which include amnesia creeping across the world. A couple scenes in, “Oh, yeah. ‘Apples’! Efcharistó!” There are dozens of Greek filmmakers (alongside Balkan compatriots) whose work materialized a few years after the turn of the century at the dusk of the career of the maker of magisterial epics, Theo Angelopoulos. Yorgos Lanthimos (“Dogtooth,” “The Favourite”) and Athina Rachel Tsangari (“Attenberg,” “Alps”) are two of the most established, plus, post-2008 fiscal crisis, entrepreneurs with production companies such as Haos Film and Heretic (and their sales arm, Heretic Outreach, which participated in Radu Jude’s “Bad Luck Banging Or Loony Porn”) looked at and took advantage of many financial factors of the moment. Plus, the newer generations of Greeks traffic in surrealism, everyday absurdity, bits of detail and flashes of beauty that fly in the face of often dark or distressing content. (The surfaces seethe.) Comedic melancholy: The stamp is there, and there are lesser entries I’ve seen that are little more than deadpan shrugs. Ah, but when the movies howl by night, raise eyebrows by day. Doc Films, Saturday, October 29.

The fifty-eighth Chicago International Film Festival, North America’s longest-running competitive film festival, announced winners of its 2022 edition in categories including International Feature Film Competition, New Directors Competition, International Documentary Competition, OutLook Competition, and Short Film Competitions, as well as the Chicago Award for an outstanding program in the Festival’s City & State program and the Roger Ebert Award, “awarded to a film competing in the New Directors Competition in recognition of a filmmaker with a fresh and uncompromising vision.”  The Gold Hugo in the International Feature Film Competition went to “Godland,” Hlynur Pálmason’s “critique of the destructive impact of colonial endeavor inspired by a collection of wet- plate photographs of rural Iceland taken by a priest in the late 1800s.” The Festival’s Silver Hugo in the International Feature Film Competition is “Close,” slated for a release by the end of the year, which also receives the Gold Hugo in the OutLook Competition. Filmmaker “Lukas Dhont’s enthralling, breathless visual style plunges viewers into the world of Leo and Remi, two thirteen-year-old best friends, as their intimate friendship is tested by the social pressures of the new school year.” In the New Directors Competition, Charlotte Le Bon’s “tenderly-observed rumination on the restiveness of unrequited young love and otherworldly longing” “Falcon Lake” took the Gold Hugo; while Ann Oren’s “Piaffe” was awarded the Silver Hugo. “Piaffe” follows “an introverted Foley artist who, while working on a commercial, is invigorated when her body begins to transform in unexpected, intoxicating ways.” The Roger Ebert Award, presented in the New Directors Competition, goes to two films: “A Piece of Sky,” Michael Koch’s “moving meditation to the patient nature of enduring love”; and Katrine Brocks’ “The Great Silence,” “a haunting tale of love, deceit, and forgiveness. The Chicago Award goes to “King of Kings: Chasing Edward Jones,” the “life story of a legendary African American powerbroker who built a multimillion-dollar empire running Policy, the illegal lottery, on Chicago’s South Side in the 1930s and forties, directed by his granddaughter Harriet Marin Jones.” More here.

Veteran filmmaker James Gray (“We Own The Night,” “Ad Astra”) has a new movie in November, “Armageddon Time,” and Gray is working his usual conversational therapy with journalists, such as Mike Ryan of Uproxx. “We should embrace the insanity of the audience because it’s what keeps the movies interesting. If the business side of it knew exactly what would make money at all times, you would see the same exact movie all the time, which is sort of close to what’s happened. So the more the audience can throw a monkey wrench in the works, the better off we are… The industry has great difficulty breaking the paradigm. It’s very hard to get the studio executives or the studios themselves, which are now such global corporate entities, it’s almost like trying to move an ocean liner… . I don’t know. I don’t know about the business. It’s a weird thing.”