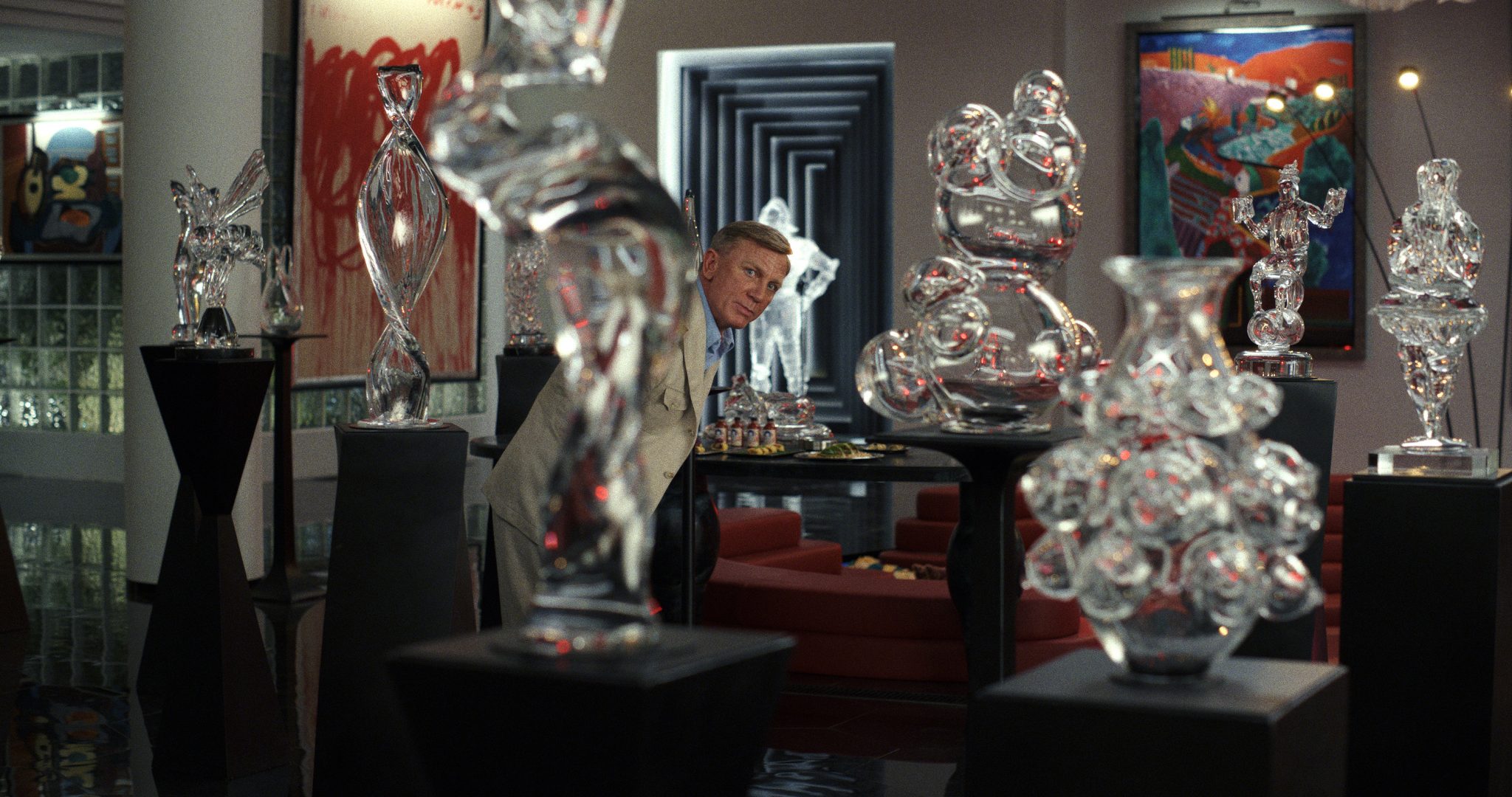 “Glass Onion,” the sequel to Rian Johnson’s 2019 worldwide theatrical success mystery-comedy, “Knives Out” opens for a week’s limited engagement in theaters before nestling into its worldwide Christmas berth on Netflix. The farcical puzzle box “Glass Onion”—the opening title of the film omits the promotional subtitle, “A Knives Out Mystery”—puts its political bearings up front in satiric amplitude. Where “Knives Out” took its fine good time bringing its subtext and terrific punchline about immigration and workers to the fore, the first of continuations of the adventures of detective Benoit Blanc jets directly into a world of callow “influencers” who are all in debt of one kind or another to a mean-minded puppet-master.

The cast that populates the one-night-in-a-mansion mystery on a Greek island retreat includes the ever-more-deep-fried Daniel Craig—his Blanc twinkles relentlessly, the performance bouncing with uncut flounce. Edward Norton is billionaire Miles Bron alongside a bumptious comic cast that includes Kathryn Hahn, Kate Hudson, Dave Bautista, Janelle Monáe,  Leslie Odom Jr., Jessica Henwick and Madelyn Cline. There’s much going on, from puzzles to reveals to reversals in a soon-to-shuffle time frame, all of which are more fun in the witnessing than the retelling. Much of the material, while set in the early days of the pandemic—cue Anthony Fauci cameo on a television in the background of a Manhattan party—is eerily topical today, down to the discomfiting sacrilege of an extended burst of art vandalism. (Of course, “Glass Onion” is making its own point about money, class, prestige and where cultural values lie.) And just as prescient is Norton’s engulf-and-devour Elon Musk-like prick billionaire, an asset-grabber given to malapropisms in a role that fits him like a pair of skinny trousers. “Alpha” is the name of his agglomeration of the ideas and start-ups of others, and Bron is always back to beginnings.

Cracks-cum-apercus like “Genius always looks like insanity at first” have been drilled into the characters’ heads like there’s a TED talk always running in their heads. They sound properly foolish murmuring and shouting them. Among the minor bits: the great Jackie Hoffman, small and bold, as Dave Bautista’s bright, mouthy mother. “The first one’s a Fibonacci sequence,” she says from the next room. The briefest cameos come from an early scene in Blanc’s bathtub, where he wears a fez and Zooms with fellow puzzlers Natasha Lyonne, Angela Lansbury and Stephen Sondheim. 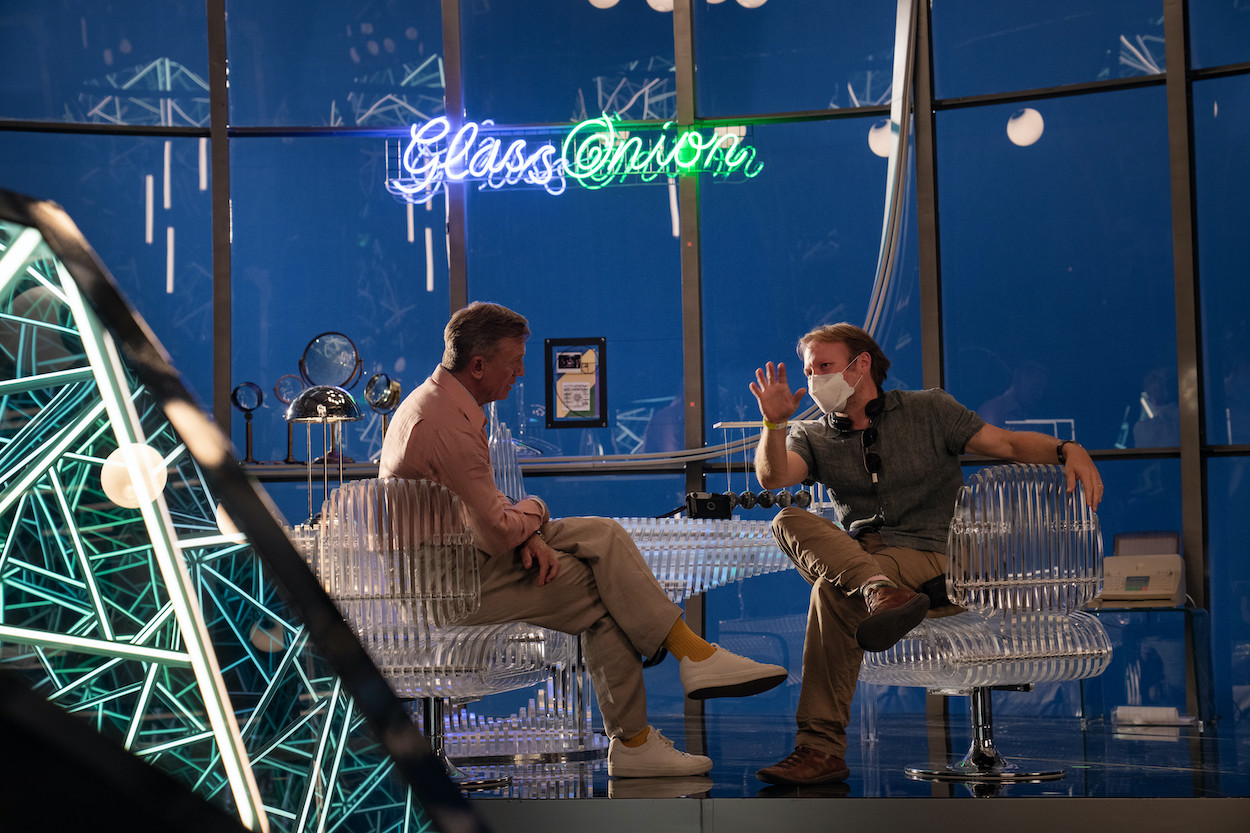 “The Glass Onion” is Bron’s island retreat, a Hard Rock cafe for a supposed brainiac, with bric-a-brac and nearly priceless art littering the hallways and frame. It’s not quite a Ken Adam-style lair for a Bond villain, but enough of a pretentious pile to be a “commune for creativity” that doesn’t lean on the “taint of academia.” The setting is also a transparent vessel for the “in plain sight” philosophy of The World’s Greatest Detective.

Bron brags on his connections: “A hard kombucha? Jared Leto sent it over”; and he’s hotly fond of another gift, “Jeremy Renner’s small-batch hot sauce.” As for the mystery to be solved over the weekend by his rackety clique: “I hired Gillian Flynn to write the whole thing.” Good, but expensive, he adds, putting his paid hand in her place. Simply: Miles Bron is an idiot.

Exchanges unmoored from context: the delirious moan of “What is death?” And “This is so dumb, it’s brilliant,” to which Blanc attaches a quick “No! It’s just dumb!” Bron’s grandest malaprop on the Greek island took a second to register: upon the smashing of grand quantities of glass, he shouts, “Mazel tov!” Rather than “Opa!” Smashing!

“Glass Onion” opens Wednesday, November 23 for a one-week engagement at River East, Showplace ICON and other theaters and streams on Netflix from December 23.