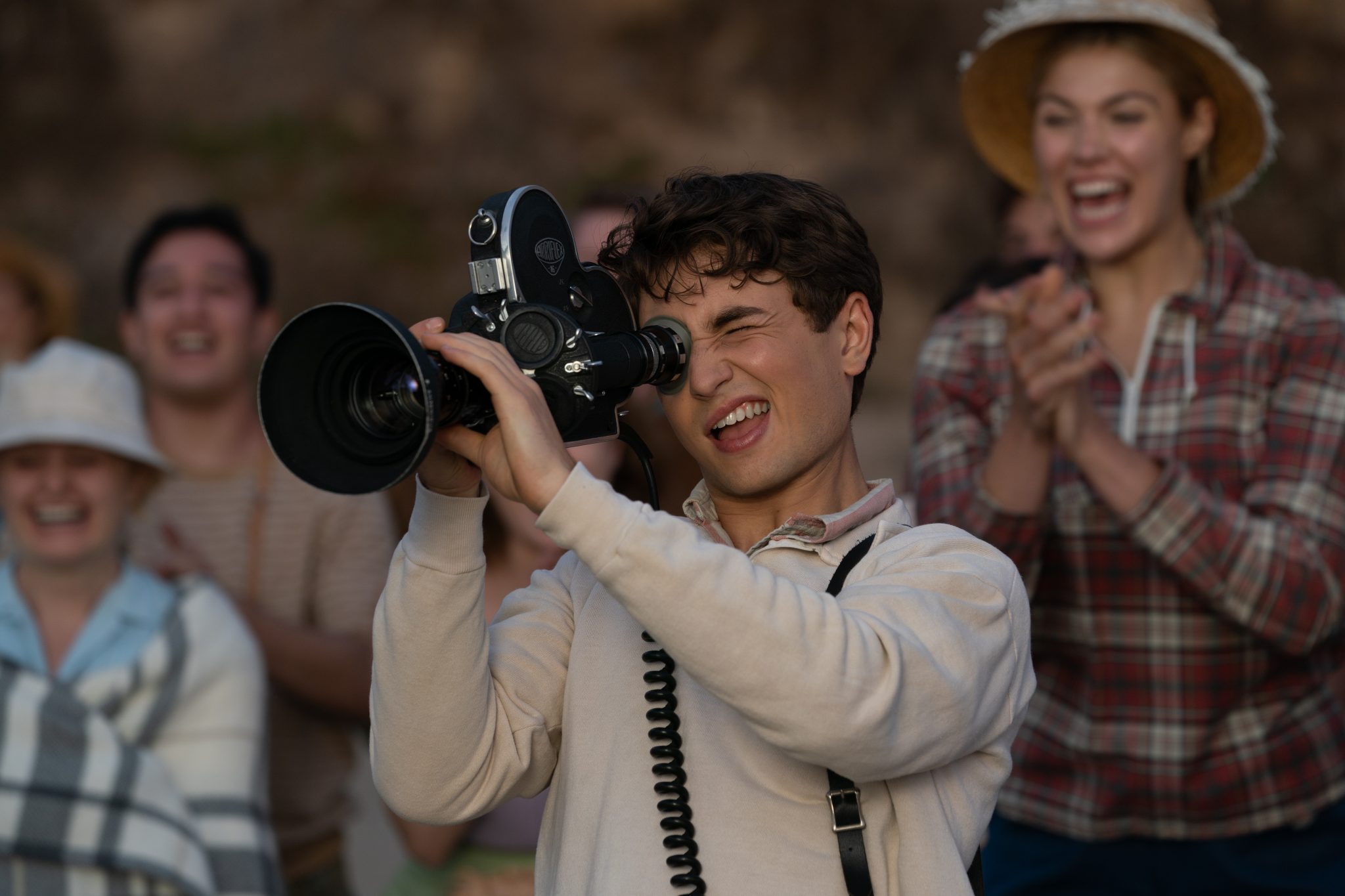 On a journey from blinding light to a kindly cyclops, Steven Spielberg simplifies his own early life in “The Fabelmans,” in gestures as brisk as the flick of a wrist. “There’s no grand historical context for it. It’s this very naked film,” co-writer Tony Kushner told Stephanie Zacharek for a Time cover story. “There are no aliens, no dinosaurs.”

The first few minutes of the movie throw theses at the wall: “Dreams are scary!” Steven stand-in Sammy, five or so, says to his mother, Mitzi, before witnessing his first movie, the pulpy pile-up of “The Greatest Show On Earth.” “Some dreams are,” she says, and later, soothing as mom and mythic creature as well, “Movies are dreams that you never forget.” 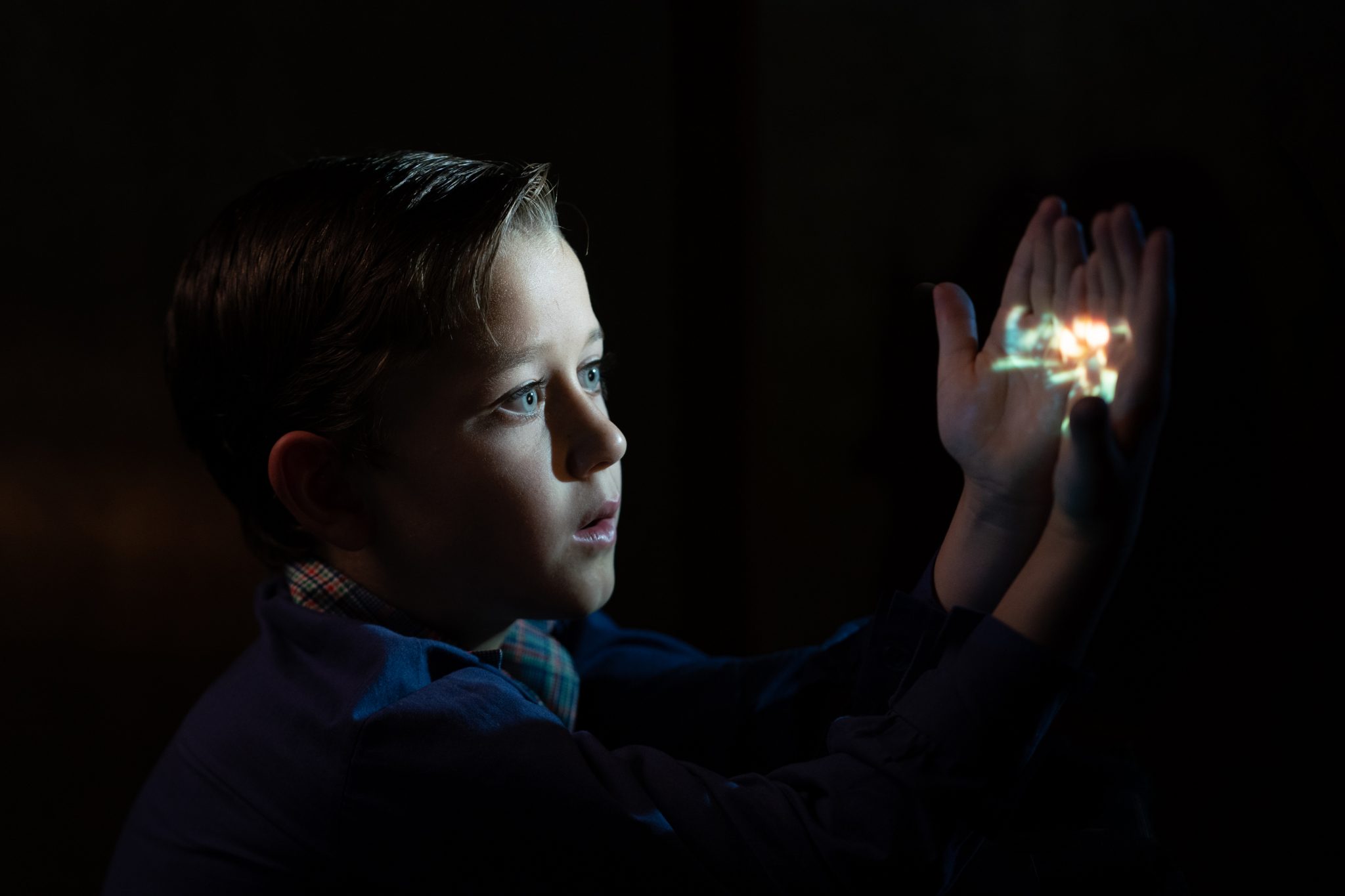 These scenes have an emphatic twinkle, but quickly Sammy discovers the power of images within the epic train crash in Cecil B. DeMille’s circus melodrama from seventy years ago. The kid’s kinetic imagination is sparked when his mother gives him a Lionel train as a Hanukkah gift. As the cars are unwrapped one-by-one, you quickly put two-plus-two together: in the basement where the train and track are assembled, where the soon-to-be boy wonder is reflected in the rounded surfaces of a wall of televisions, havoc will surface. Sammy crashes his fresh toy in service of newfound vocation.

Mitzi’s nonplussed, and encourages him to shoot the destruction, and just once, so he can watch it again and again and not destroy the gift. Revelation! For a few shots, Sammy looks like Haley Joel Osment’s doll-eyed boy in “A.I.”: wonder transfixes his features. “It’ll be our secret movie, just yours and mine,” Mitzi says, presaging a major movement of the movie an hour down the line. 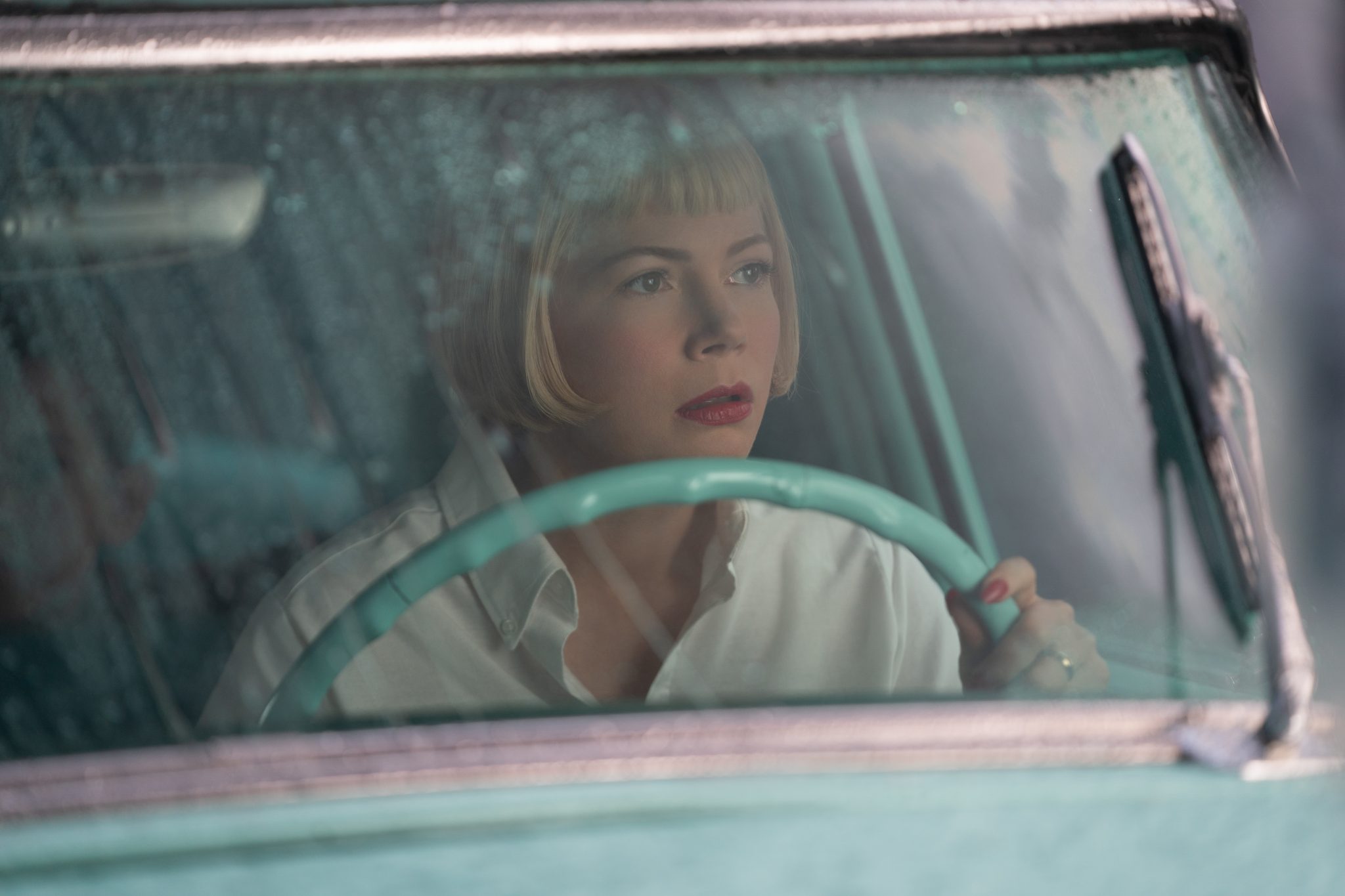 The creative impulses of the talented Mitzi, hair in a perennial pixie cut, has been stymied in the making of family, which volleys when she rallies the impulses, artistic and otherwise, of her brood of boys and girls. (And later, when she plays the piano or takes the chance to dance, tipsy beside a campfire, a bruised angel dancing, dancing in a hippie’s diaphanous white dress as if rising from flame itself.)

In a telling early scene, she packs her children into the car to chase a tornado. The danger is brief and in a surreal, quietly lyrical image, we see a line of bundled shopping carts trundling past the rain-streaked windshield, a-jitter like Mitzi’s rattled brain. (There’s more than a little Roy Neary in her blood.)

Threads of “The Fabelmans” echo instances in earlier Spielberg movies: he’s been mining and refining this lode from the precocious start of his long career. Each measure after reassures that a practiced craftsman and a keen dramatist are at the wheel.

Casting is an overlooked part of the moviemaking art, but stirring performances are not: the movie is about the young man, but also the mother, whose impulses toward selflessness and selfishness begin to wear. The movie idealizes Michelle Williams, as does the son, and quicksilver expressions across her features are matched by gestures and motion; Williams’ hugely empathetic work possesses the length of her body and her reach, physically alert and always ready to spring or drape. Williams acts with her full figure, dramatic, willowy. (Mitzi longs to flow, to grow.)

She wears super-stylish clothes, the costume designer loving Williams as much as Spielberg does as the figure of the mother: overalls or simple dungarees with rolled up cuffs, a crisp white shirt, a touch of lipstick. Mitzi is a picture. (Later: a fawn-gray cowboy hat, a ribbon of black as a bolo tie, another crisp white shirt.)

As Sammy’s reticent but not diffident father, Paul Dano offers a study in a different level of repression, eyes belying stoic features, slight blush at a major turn creasing his incompletely shaven cheeks. In a straightforward moment, depths spring. There’s a quicksilver dawning for the engineer father as teen Sammy explains how he’s putting together his increasingly ambitious movies: his features transform, reflecting the thought: “My son‘s synthesizing knowledge!” 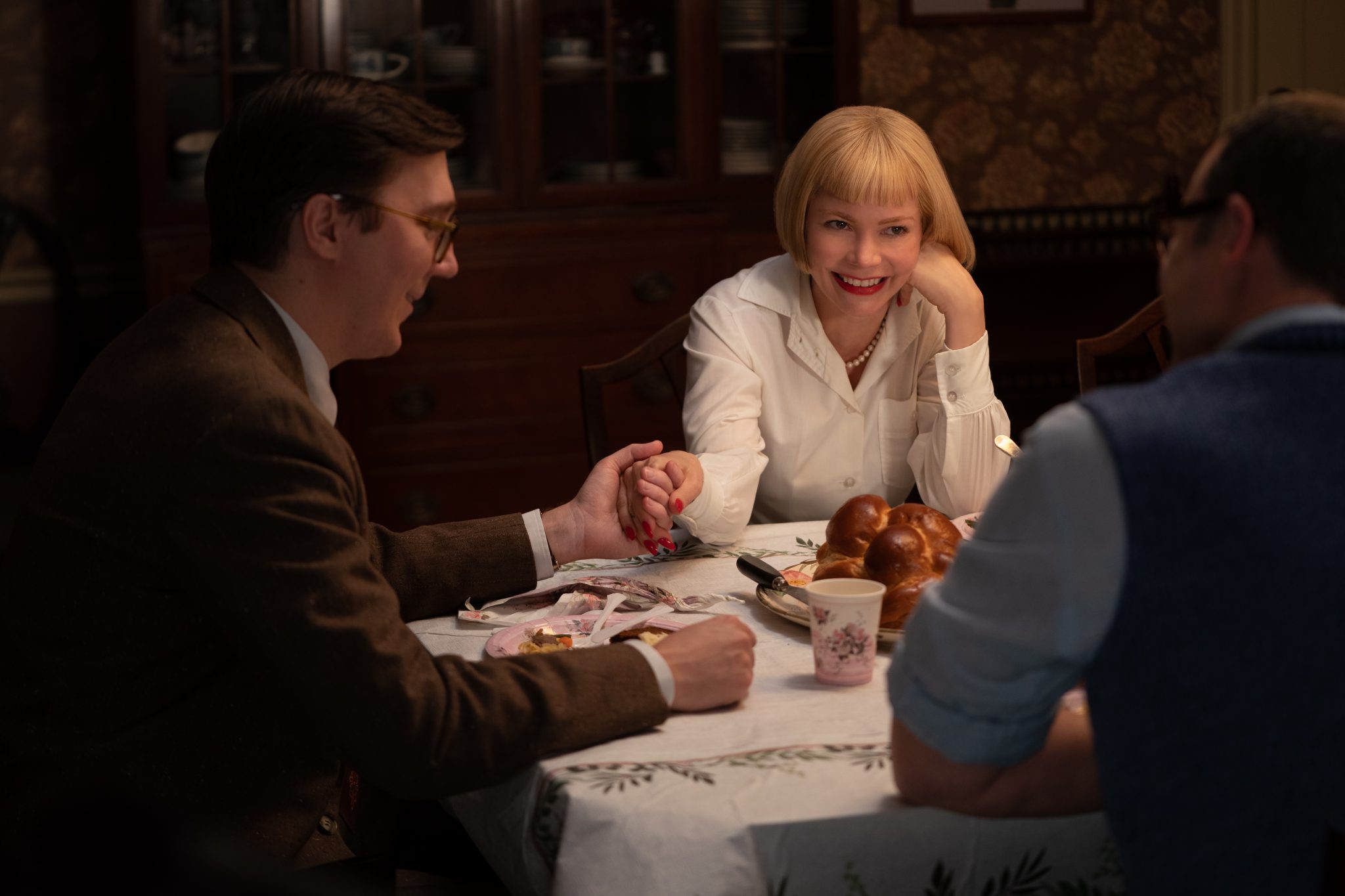 Sammy doesn’t notice everything around him, not all at once, as he grows both more fixated with and more proficient at the “hobby” that will become a profession. High school has its conflicts—girls, bullies, antisemitism—as does home life, with mother, father and family best-friend Bennie (Seth Rogen) who makes Mitzi laugh when all else is fraught. Starting with a passage reminiscent of “Blow-Up,” Sammy discovers things he had never imagined, another in a concatenation of primal scenes. “At a very young age, something happened, which is reflected in our film, where I stopped perceiving my mother as a parent, and began looking upon her as a person,” Spielberg says in the film’s press notes. “I think all kids at a certain point in their lives have these moments where they realize, ‘Hey, my parents have been people all this time.’ I had that epiphany when I was sixteen years old.” (That’s when Sammy, advanced to 16mm from 8mm, places his head on the pillow and his camera to his cheek, clicking the trigger to run the motor to comfort himself toward sleep.) 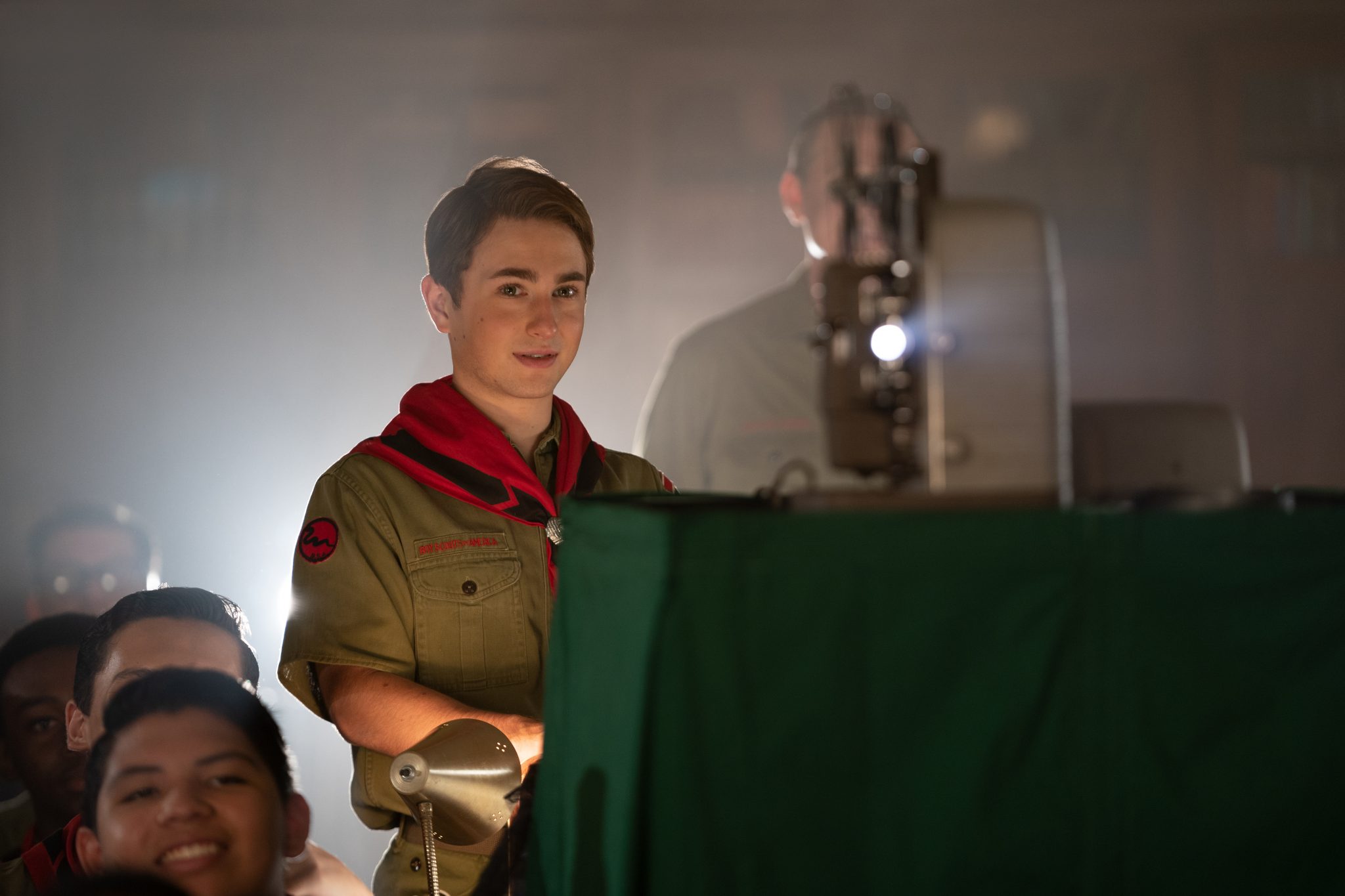 Spielberg and Kushner pare dialogue to the punchy and the peculiar: “Guilt is a wasted emotion”; “Leave the Fabelmans mishegoss behind in the moldy old rental house” and the giddy pronouncement, “Mom got a monkey!” (Not to neglect “Who cares what you meant with your movie!”)

Spielberg bookends these chapters with one of Hollywood’s ultimate “bar pieces”—an anecdote based on the young Spielberg getting ushered into the offices of one of the system’s greatest one-eyed directors, a seemingly gruff man who comes straight to the point. This great figure of the studio system (played by another great, a contemporary of Spielberg’s) reduces a career of thirty-five movies or so to the most elemental advice, which then leads to a small jig that’s a zig and a zag and maybe the goofiest closing shot of Spielberg’s career.