Antoine Fuqua’s epic “Emancipation,” stars Will Smith as a man who escapes from slavery and eludes hunters and rushes the swamps of Louisiana. “The film is inspired by the 1863 photos of ‘Whipped Peter,’ taken during a Union Army medical examination, that first appeared in Harper’s Weekly,” Apple relays. “One image, known as ‘The Scourged Back,’ which shows Peter’s bare back mutilated by a whipping delivered by his enslavers, ultimately contributed to growing public opposition to slavery.” Opens Friday, December 2 in theaters and on Apple TV Plus on December 9. 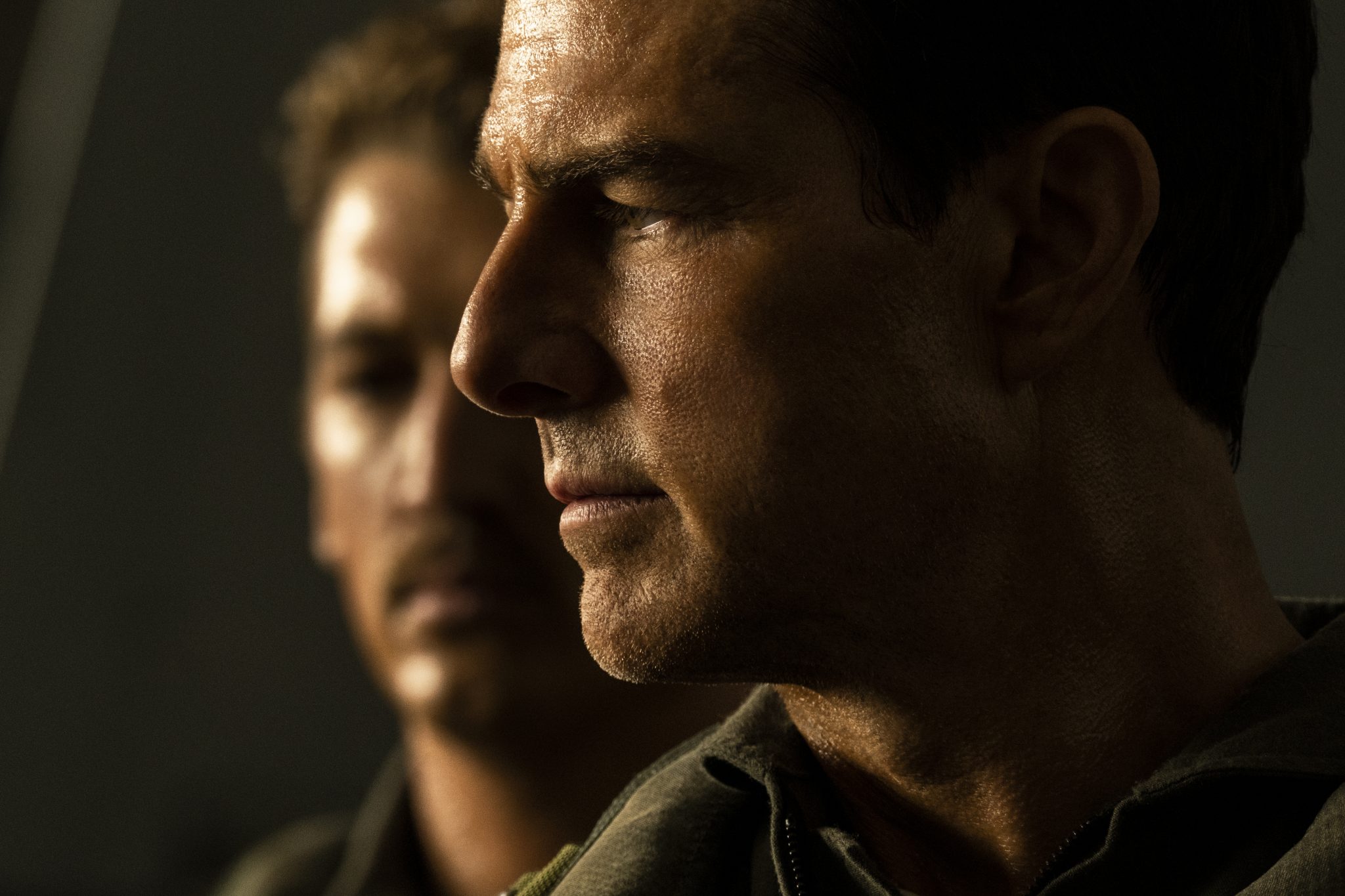 “Top Gun Maverick” returns to theaters for a victory lap before its premiere on Paramount Plus (and before IMAX and large-format screens are filled with “Avatar: The Way Of Water”), perhaps in hopes for increasing the $1.5 billion box-office mark.

Facets presents “Brainwashed: Sex-Camera-Power” including a panel event with director Nina Menkes. Siskel offers “Jonas Mekas 100!,” gathering a forceful fistful of works, some in 16mm, from the “godfather of avant-garde cinema.” Also this week at Siskel, with “A Couple,” nonfiction grandfather Frederick Wiseman makes his fiction debut at the wry age of ninety-two, a telling of the nearly half-century of marriage between Tolstoy and his wife Sophia, opening Friday, December 2.

At Doc Films, there’s a rare outing for the polymorphous mental-breakdown Kaiji-inflected cyberattack of Shinya Tsukamoto’s “Tetsuo The Iron Man.”

Christmas is coming, if not the ambulance, in “Violent Night,” a return to the neglected genre of the holiday slasher, starring David Harbour and directed by Norwegian director Tommy Wirkola (“Dead Snow,” “Legend of the Fjord Witch”), with John Leguizamo, Cam Gigandet and Beverly D’Angelo. A touch of holidays past and future glimmer in Bong Joon-ho’s Best Picture Oscar-winner “Parasite,” playing as part of the Film Center’s yearlong “50/50” anniversary celebration.

The return of the Film 50 listing of players behind-the-scenes in film in Chicago is out, in print for subscribers and those who pick up copies around the city; it will be online on Tuesday. This year’s edition includes a conversation with the principals of the Music Box Theatre and Music Box Films about their unique position in American film exhibition (it’s 7,000-w0rds in the expanded online version), and profiles of fifty players or groups. The full, expanded version (with a range of conversations running over 27,000 words) will be online on Tuesday, December 6 here. 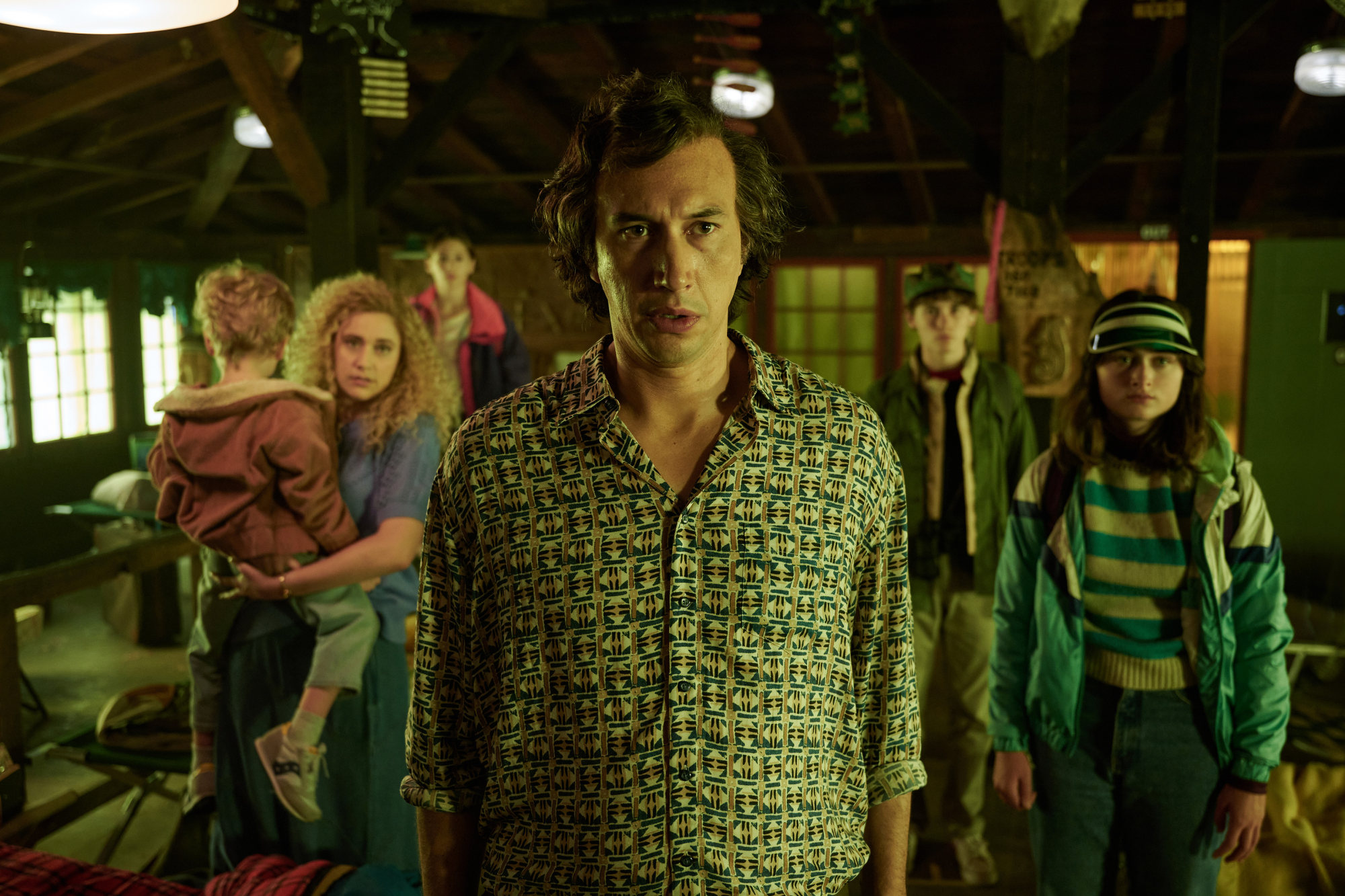 “I understand the music, I understand the movies, I even see how comic books can tell us things. But there are full professors in this place who read nothing but cereal boxes,” says one of the professorial wags in Don DeLillo’s 1985 novel, “White Noise.” To which his partner in rhetorical crime chimes, “It’s the only avant-garde we’ve got.”

Loathed it, loathed it, loathed it: the pricey Netflix mounting of the period satire by a novelist generally considered unadaptable, written, directed and co-produced by Noah Baumbach (“The Squid and The Whale,” “Marriage Story”) aspires to tonal insolence, but it’s a catastrophe, a mess, a mass of masses, a whiff and a miss, tied together only by a lovely Danny Elfman score, endearingly eclectic, lending modest coherence and cinematic credence.

Baumbach has been described as appearing superior to his characters, but like Wes Anderson, his contempt works when he’s at least punching sideways. (For instance, Anderson’s “The Grand Budapest Hotel” is purest bile, and magic.) Adam Driver’s hairstyle evokes a more unsightly Steve Coogan; across the board, costumes clash like in period pornography. The action scenes? Inert, but definitely showing guttering founts of money.

Sometimes the movie—satirizing, but only just so much—is an essay film with flumes of dialogue. (“Men who intimidate and loom darkly” is a typical phrase, in this case attached in a classroom presentation to images of Hitler and others.)

As adapted, the words are more fulsome chatter than narcotic hum; the page of beautiful blank phrasemaking presented as conversation allows for deeply subjective internal interpretation. The text, spare on page, is too often elephantine on screen, landing like masses of wet newsprint.

Interviews with Baumbach and Greta Gerwig suggest a movie missing from the crunch of detritus in each movement of Baumbach’s movie following a flailing family forever in free fall: “We all have the surface of our life in which we have to live as if we’ll never die,” Gerwig says in Netflix’s press notes. “And then a chasm opens underneath you and you deal with that fact, that it’s all going away, and I think in some ways the book reflects that—not just American, but very American—desire to keep it separate. Which, then when something happens, like the Airborne Toxic Event, it just is so unbelievably destabilizing. There was something existential at the core of it that was totally thrilling to me and terrifying.” This is good! This is the book, kind of? This is not the movie we have at hand. It’s more like Altman, aped; Godard, misapprehended.

There’s a capricious dance number under the end credits, choreographed with the film’s entire cast in a supermarket against “New Body Rhumba,” a new song by LCD Soundsystem. Its domesticated freakout isn’t from DeLillo, but in its own way, is more DeLilloesque than the literal partaking from the page. From “White Noise”: “Think of the great poetry, the music and dance and ritual that spring forth from our aspiring to a life beyond death. Maybe these things are justification enough for our hopes and dreams, although I wouldn’t say that to a dying man.”

Again from the book: “He thinks he’s happy but it’s just a nerve cell in his brain that’s getting too much stimulation or too little stimulation.” And so the A&P is a bright locus of the nightmares the characters speak of, in American life, if not admitted from their nocturnal fevers. Brands crow from end caps. They’re everywhere, but largely there, the pop fact in the peppy bardo of the supermarket, of true-to-life brands, persistent cockleburs affixed to all corners of the frame: Lucky charms, Wonder Bread. Kentucky Fried Chicken. Pepsi, Frosted Flakes. Campbell’s, Jif, Peter Pan, Pringles. Carefree. Coke, Doritos. Cheerios. Schweppes, Comet. Aqua Net. Purina, Brillo, Tide. Ritz, Orange Crush. Milk Duds.

“White Noise” opens in 35mm on Friday, December 2 at the Music Box. 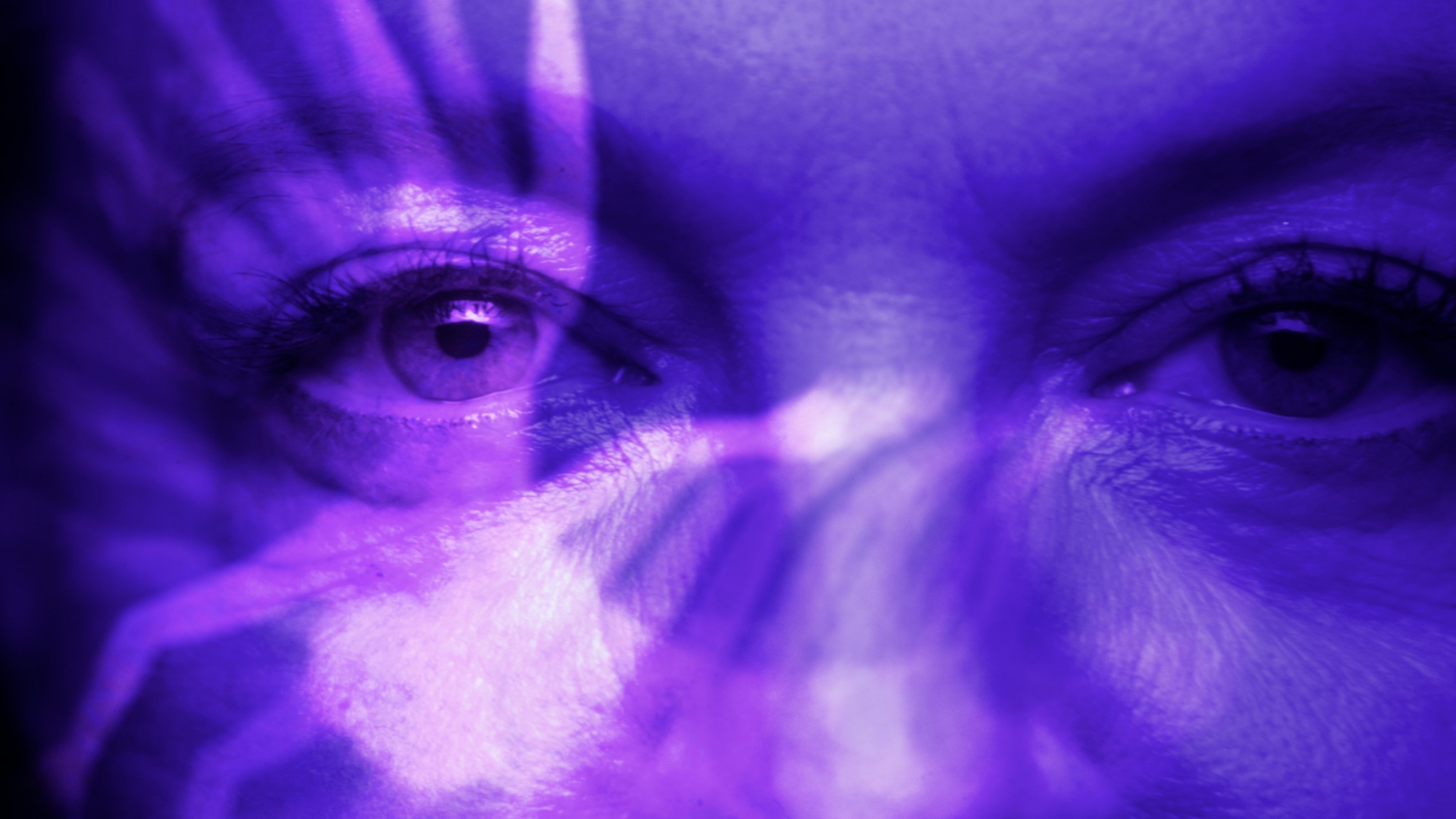 The thesis among theses in Nina Menkes’ teeming cine-essay “Brainwashed: Sex-Camera-Power” is “If the camera is predatory, then the culture is predatory.” Taking cues from a wide range of movie examples, and building on an earlier lecture, “Sex and Power, the Visual Language of Cinema,” the veteran director makes a case for the underlying power of film grammar. The copious clips brim with energy in their brief bursts. Film figures who appear include Julie Dash, Penelope Spheeris, Charlyne Yi, Joey Soloway, Catherine Hardwicke, Eliza Hittman and Rosanna Arquette. The Sunday, December 4 showing includes an in-person panel discussion featuring director Nina Menkes and producer Maria Giese (via Zoom), moderated by Michele Weldon, with panelists Michelle Yates, Rebecca Fons and Ines Sommer. “Brainwashed: Sex-Camera-Power” opens Saturday, December 3 at FACETS.

Promoting “Jonas Mekas 100!,” the Film Center plucks a pretty quote from the long-lived Lithuanian expatriate godfather of independent films: “I am standing in the middle of the information highway and laughing, because a butterfly on a little flower somewhere in China just fluttered its wings, and I know that the entire history, culture will drastically change because of that fluttering. A Super 8mm camera just made a little soft buzz somewhere, somewhere on the lower east side of New York, and the world will never be the same.” Eight programs from his seven-decade career will be shown, drawing from 35mm, 16mm and digital formats, including his first feature, “Guns Of The Trees”; his nearly five-hour “masterpiece about nothing,” “As I Was Moving Ahead Occasionally I Saw Brief Glimpses of Beauty,” and from his late video diaries, “A Letter From Greenpoint.” Siskel, December 2-11.

Two families meet: one poor, another, on the bright and shiny surface, extremely well off. An elegant post-modern home is a battlefield in waiting. “Parasite” (2019) is blunt about what it’s about: class. And yet director Bong Joon-ho doesn’t preach. He doesn’t make broadsides. He makes brilliant satires of the stakes of money or the lack of it. (For many years under a dictatorship, South Korea was until very recently an extremely poor nation.) Bong is a carpenter of atoms: each element of behavior, performance, décor, splash of color, sound of squish, is calibrated and constructed and will not fall. The performances are brilliant, soft and hard, and Bong is adoring but unsparing. Describing even an instant of any of the work by Song Kang-ho, Jang Hye-jin, Choi Woo-shik, Park So-dam, Lee Sun-kyun, Cho Yeo-jeong, Jung Ji-so, Jung Hyun-jun would be a crime against the unfolding delight of Bong’s dense, yet effortless, delicious thriller with very large teeth, smiling generously at its own grace. Siskel, Monday, December 5. 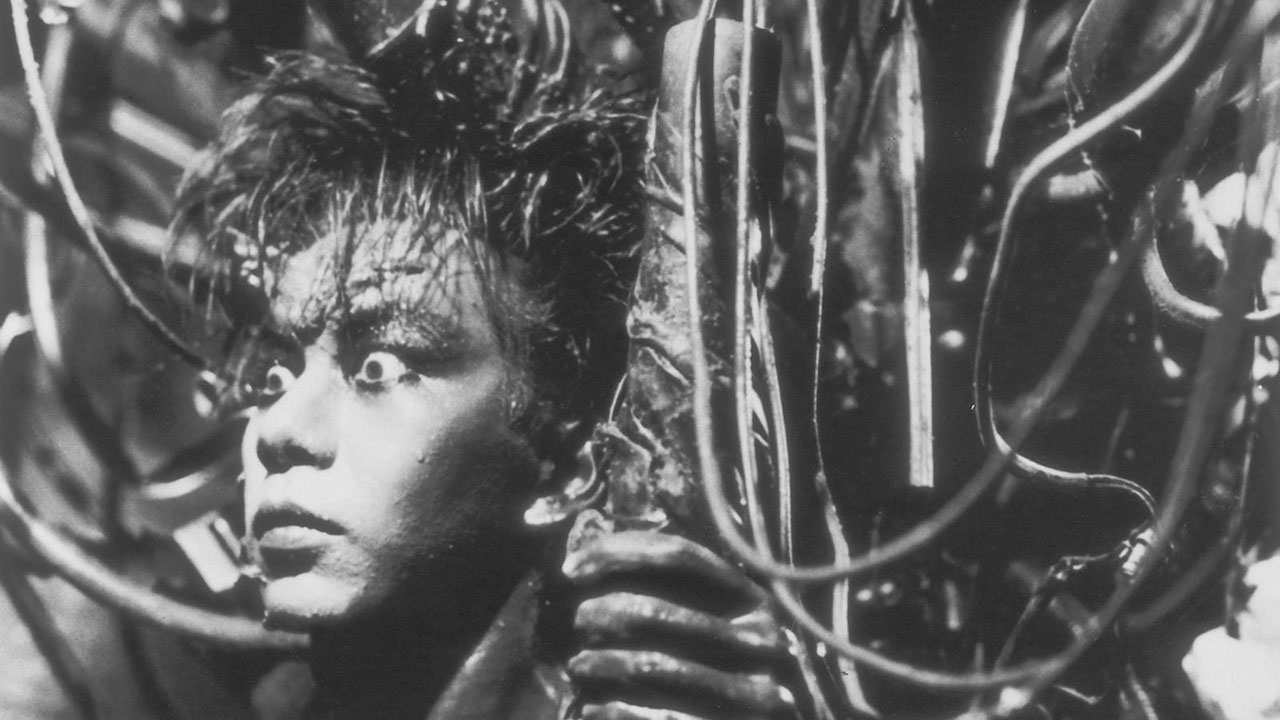 Doc Films makes crunchy work describing Shinya Tsukamoto’s 1989 debut, “Tetsuo: The Iron Man“: “A homoerotic merger of Lynch’s ‘Eraserhead‘ and the kaiju genre, director Shinya Tsukamoto’s first feature is the epitome of cyberpunk body horror. ‘Tetsuo‘ follows the ‘Salaryman’ as he is thrust into a carnal, industrial nightmare, slowly turning into a metallic monster after being cursed by the Metal Fetishist he accidentally hits with his car. Grimy, grotesque, and grossly phallic, this is the film masochist’s cult classic must-see.” Doc Films, Friday, December 2.