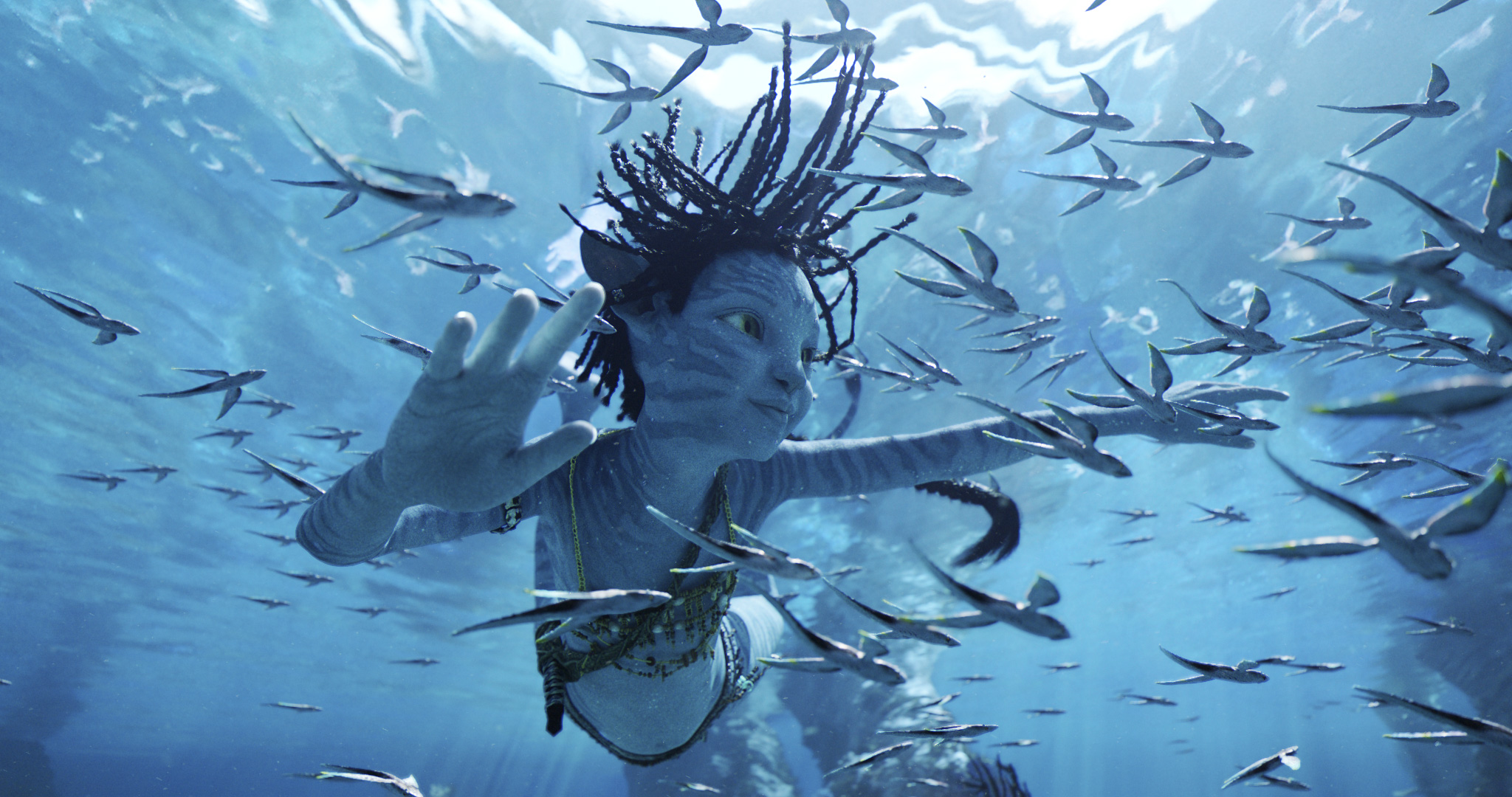 How many times does everyone everywhere who cares about the sustenance of movies in movie theaters, in jolting back to life theatrical exhibition, have to pay to see the technological marvel of “Avatar: The Way Of Water”? James Cameron’s ninth feature has been positioned as nothing less than a referendum on the survival of theaters and moviegoing, as if it served the same function as war bonds in World War II. The sentiment is ubiquitous and unavoidable: The continuity of 125 years of cinematic history depends on you!

That’s a lot to hang on any production, including “Avatar: The Way Of Water,” the alternately blissing and pummeling tsunami of bright colors and supernaturally detailed special effects, threaded with upfront appeals to spiritual yearning for enlightenment and becoming one with nature alongside a final hour of protracted action violence. The three hours (plus credits) of the first of four projected sequels, one of which has already been shot, is as much immersive amusement park attraction as apex attainment of a sustainable industry. Theater owners can’t wait thirteen years between $350-million uber-productions.

“I’ve been thinking a lot lately about what art is in its essence. And I think dreams have something to do with it,” the sixty-eight-year-old Canadian filmmaker told AP’s Jake Coyle. “There’s like a render engine or a narrative engine that runs in our heads every night. It puts images and scenarios together in some kind of sequence. Sometimes, most times, they’re completely illogical. But they have a kind of momentary logic to them. I’m always telling everybody on the film, this is a movie with floating mountains. It doesn’t have to always be logical. It just has to have that dream logic.”

That covers the movie’s roaring achievement. There’s cinematic genius in every overdetermined frame, every animated motion in shifting frame rates, the relentless photorealistic detail. The sensation is like being trapped in a bathysphere in an aquarium. 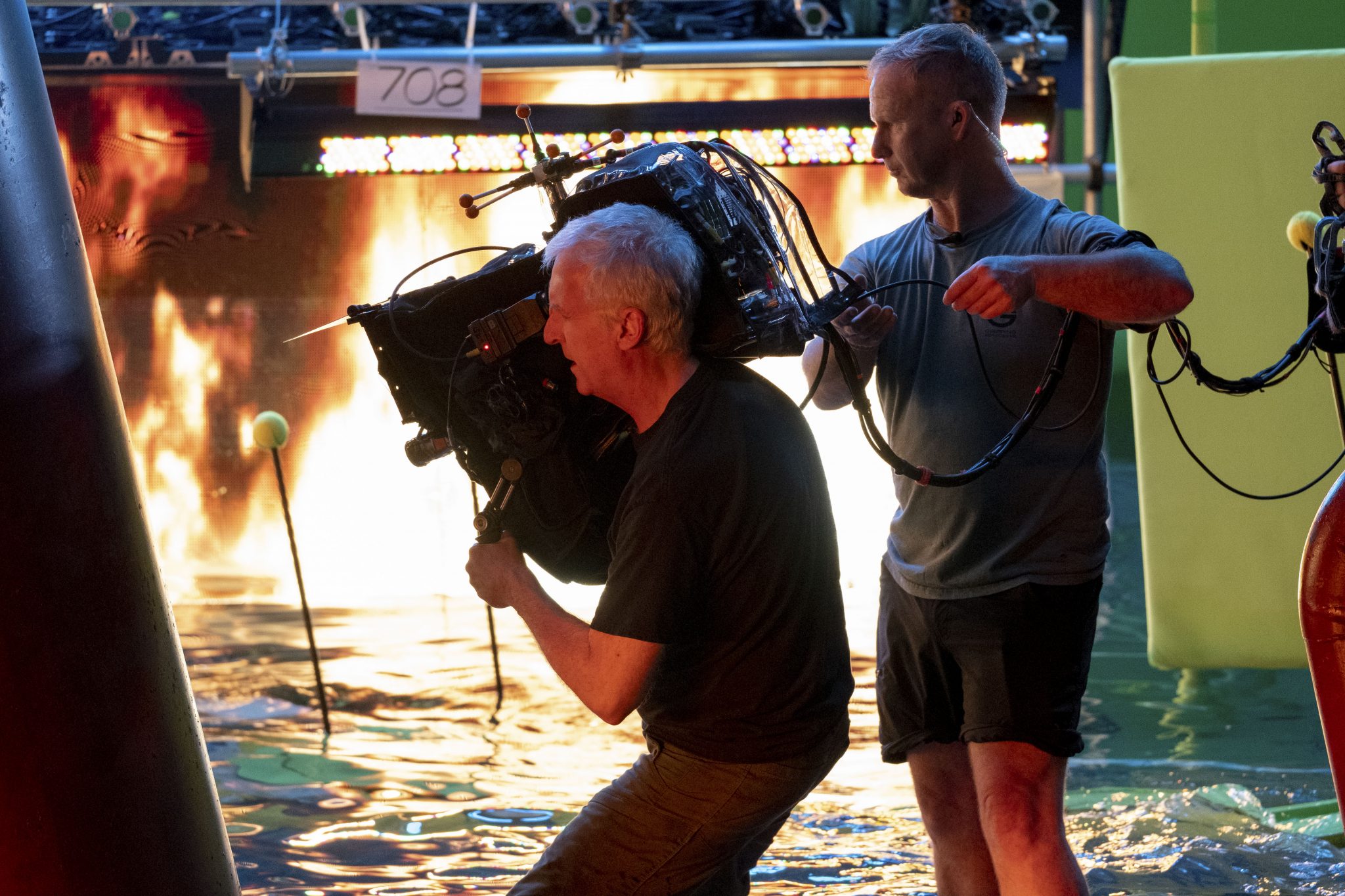 James Cameron tends to detail on “Avatar: The Way Of Water”

Dialogue is nearly superfluous in “Way Of Water”‘s three or more separate movies of disparate tones rolled into one, but there’s still enough gab to grate. That includes scads of earnest spoken exposition, a clumsy, intermittent voiceover and a rudimentary approach to human and otherworldly speech. One of the lasting beauties of “Titanic” is that its epic romantic yearning unfolds in the fashion of melodrama that would have been written at the time it takes place: that frame doesn’t stand when a world is one entirely of your own creation.

What’s spoken by the film’s adults is mostly cut-and-dried, brass tacks or nature talk—”I”m done with war, okay?”—so it’s left to the teen characters to bring the poetry, the shapeliness of the spoken word, saying things like “Dad is gonna ground you for life”; “C’mon, don’t be a wuss”; “I got this” and “Throw a punch, bitch.” (The word “butthole” survives on Pandora.) This technically impeccable ride, probably the most expensive in human history, has linguists for Na’vi, but not for English. “Trust me, okay?”

Did I really hear “Show me the money”? And “Burn the hooches, light ’em up?” I could have been hopefully hallucinating by that point. Part of the key incantation of the core belief of the Na’vi, “The way of water has no beginning and no end, it is around you and in you” shares the rhythm of the much more haunting “This is the water. And this is the well. Drink full and descend. The horse is the white of the eyes and dark within,” in David Lynch’s “Twin Peaks: The Return.”

Cameron told Deadline that “beauty” shaped what he wrote before embarking on a years-long schedule with 3,350 visual effects shots: “My key to it was beauty and a sense of belonging, a sense of connection. There were some subconscious themes that I felt that we needed, to make sure that the story took us to places that we could visualize that, and beauty’s one of them. I don’t think people put enough emphasis on beauty in movies these days, something that really touches the soul, visually.” All the beauty and all that cash shed: “Avatar: The Way Of Water” is a singular accomplishment, and now awaits word on whether it will become one of the five highest-grossing movies of all time. Congratulations, bravo. Here come the requisite billions, shared with movie houses worldwide. Blue is the new green.

“Avatar: The Way Of Water” is playing on large and larger screens.